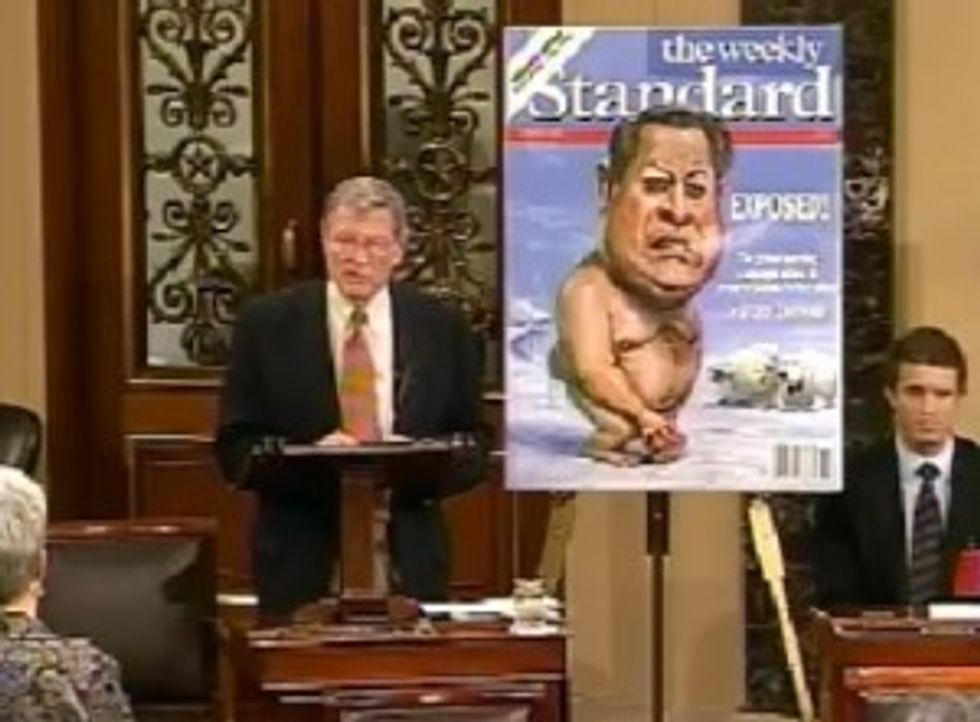 Terrible news, America. After decades of stockpiling obscene quantities of killing implements for fun and murder around the world, the good times are coming to an end now that Senator Jim Inhofe has gotten wind of the real reason the Department of Homeland Security is buying 1.6 billion rounds of ammunition: the government is trying to keep needy American gun owners from purchasing it. Did you notice how the Senate voted against expanding background checks lately? And have you noticed there is an ammunition shortage in some parts of the country? Jim Inhofe has carefully worked it out on his abacus, and boy, prepare to crap your pants.

The government is buying ammunition so no one else can have it, says Jim Inhofe. "So what are they going to do if they want to, if they want to violate our Second Amendment rights?" he said in an interview Monday. "Do it with ammo." As a result, Inhofe's constituents in Oklahoma are apparently being forced to wander a treacherous landscape of communist bread lines in order to obtain the ammunition they and their families so desperately need. To fix the problem, Jim Inhofe is introducing a bill to limit how many bullets the government can purchase from now on.

Inhofe and Rep. Frank Lucas (R-Okla.) introduced a bill last week to fix this alleged problem. The Ammunition Management for More Obtainability (AMMO) Act of 2013 would put caps on the amount of ammunition federal agencies could buy -- a measure that could qualify as Inhofe's first-ever support of gun control.

"I don't know how [Napolitano] or anyone else can deny this is going on, all you have to do is go to any of the places in Oklahoma out where I am," Inhofe said Monday. "I went down to Texas, I tried places down there - no one has any ammo. It's supply and demand, they've taken it all up."

This thing, this bill called the "Ammunition Management for More Obtainability" Act is the best advertisement for boosting literacy spending in Oklahoma we have ever seen. Those words strung together have nearly the syntactical clarity and meaningfulness of a bill titled the "Ammunition Magic for Moose Orgasms" Act but with a bigger nap factor. Pick something more fun next time if you need to make lame acronyms, Jim Inhofe. Hire us, in fact, and you can pay us in booze.

There are of course numerous market factors contributing to the ammunition shortage, most of which could be summed by the word "panic," as in millions of panicked idiots have been buying guns at frantic rates, guns which need ammunition, thus creating high demand that ammunition manufacturers have been unable to meet. But why let "reasonable explanations" ruin the fun?

Here's a taste of the horror currently taking place on the ground in Oklahoma according to the local news station:

There's a two-box limit for customers at Big Boy's Guns and Ammo in Southwest Oklahoma City and at other gun shops. Many fear the government could be stockpiling ammunition and preventing the public from doing the same.

"They can't buy bullets. Even .22 shells are being rationed. So this is an effort to say, outside of the department of defense, of course, if the rest of the federal government has a two-year supply, stop buying bullets," said Republican Congressman Frank Lucas.

"You basically go all day if you've got the time, you go around and try to find someone who's even got a small shipment. And even then, you only get one box per day, at a time, per caliber," said ammunition buyer Jim Mitchell. "I think it would be a good bill because the people is what it's all about. And we're the ones who are wanting and needing the ammunition."

Please, Congress, think of the people. They cannot survive without their bullets.