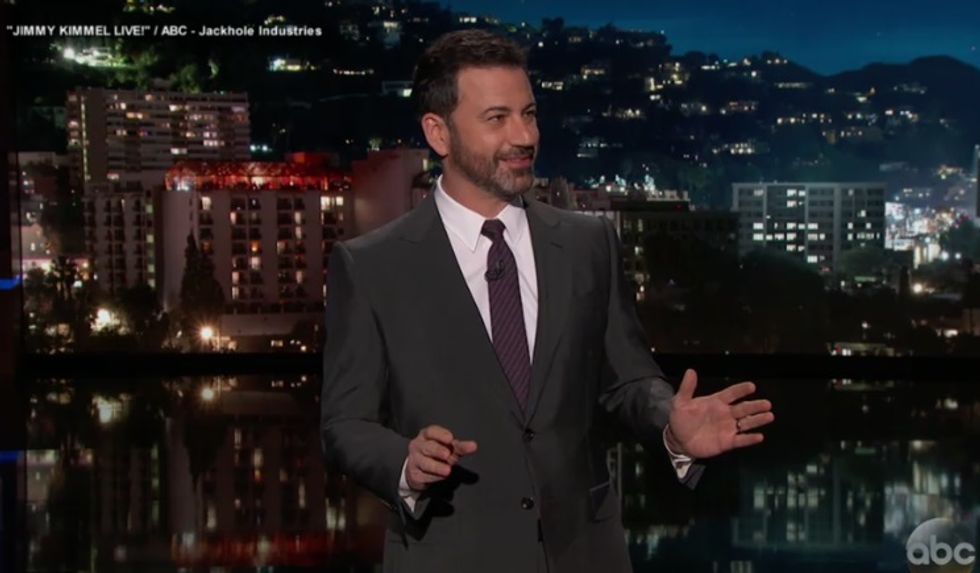 You see, on Wednesday, Roy Moore was giving a little sermon at a Baptist Church in Theodore, Alabama -- probably on how Jesus said suffer the molesters of little children to go to the US Senate -- when his presentation was interrupted by heckling protesters shouting "Why would they lie?" and also by actor/comedian Jay Barbieri, who occasionally appears on Kimmel's show as the character "Jake Byrd," a stereotypical redneck type. Wearing a "Gimme Moore" T-shirt, Barbieri yelled at the protesters, "That's a man's man" and "Does that look like the face of a molester?" As he was taken from the church by law enforcement, Barbieri continued the trolling:

As comedy, it was kind of stupid and a waste of time. Breitbart's coverage of the interruption treated it as a threat to decency, Christianity, and God himself, and noted that the pastor of the church had "warned attendees of a worship service at which Moore was speaking multiple times that it was against the law in Alabama to disrupt worship services," so you know Barbieri was the worst kind of scofflaw, especially since the pastor issued a second warning. AND YET HE PERSISTED.

Moore's people know that a fight with a celebrity is always a good thing to rile up the base, so senior campaign adviser Drew Messer gave Dead Breitbart's Home For Anxious Wingnut Culture Warriors an exclusive quote: "Jimmy Kimmel and the ‘Hollywood elite’ cross the line when they invade our Churches under a disguise and attempt to make a mockery of our worship services," adding in a later email,

“If Kimmel wants to mock our Christian values, he should come down here and do it man to man instead of hiding behind a camera in Hollywood,” Messer said. “And yes, Jimmy, we will still rebuild our military, build the wall, protect our gun rights, reform our tax code, and support President Trump whether you like that or not. Hollywood will not bully us around.”

Moore picked up the theme right away on Twitter, sending a link to the Breitbart piece and challenging Kimmel to single combat -- possibly a debate, possibly a street fight:

Kimmel was only happy to reply, with elan, and also with brio:

Beitbart's Hot Take on that: "Kimmel replied with yet another attack on Christians in Alabama, mocking them for not having Christian values." Apparently, REAL Christians vote for (alleged) child molesters, as long as they're in favor of tax cuts. The dialogue continued a bit:

Pee Enthusiast Todd Starnes had thoughts on the matter, too. They were stupid thoughts:

So in his Thursday night monologue, Kimmel explained he'd had an odd day, and accepted Moore's offer to come to Alabama and "do it man to man," either with his fists or by talking about Christian values as Kimmel understands them:

It doesn’t fit your stereotype, but I happen to be a Christian too. I made my first holy communion, I was confirmed, I pray, I support my church, one of my closest friends is a priest, I baptized my children. Christian is actually my middle name. I know that’s shocking, but it’s true. So if you’re open to, when we sit down, I will share with you what I learned at my church. At my church, forcing yourself on underaged girls is a no-no. And some even consider it to be a sin [...]

At our church, we're encouraged to confess and ask forgiveness, not to call the women you allegedly victimized liars and damage them even more. But maybe your church is different, I don't know.

Well then! Clearly another slur on Alabama voters and their Christianity! Kimmel said he'd be happy to sit down and talk it out with Moore, as if that would ever happen -- Crom knows we'd buy popcorn -- but he also recognized that Moore's challenge may have involved the game of fisticuffs instead:

Maybe when you say, ‘Come down to Alabama and we’ll do it man to man,’ maybe that means you’re challenging me to a fight, which is kind of what it sounds like. And if you are, I accept, by the way. I accept that invitation. There is no one I would love to fight more than you. I will put my Christian values aside, just for you and for that fight.

Kimmel noted it was rather odd that Moore would like to "go man to man" with him when he won't even debate his opponent,Doug Jones, and added, "Maybe if you went man to man instead of man to little girl, you wouldn't be in this situation. Allegedly."

As for the charge of hating Alabama, Kimmel clarified that, as an elitist Hollywood elite, he personally loves Alabama, but just doesn't like alleged child molesters, which of course is still a slur, probably. And then somewhere in the YouTube comments, we're pretty sure someone clarified that Catholics aren't really Christians because praying to the Virgin Mary is idolatry, the end.

Yr Wonkette is supported by reader donations. Please click here to send us money! Or you can get cash and hand it to us, mano a mano. While you're at it, send some money to Doug Jones for the final week and a half of the campaign!