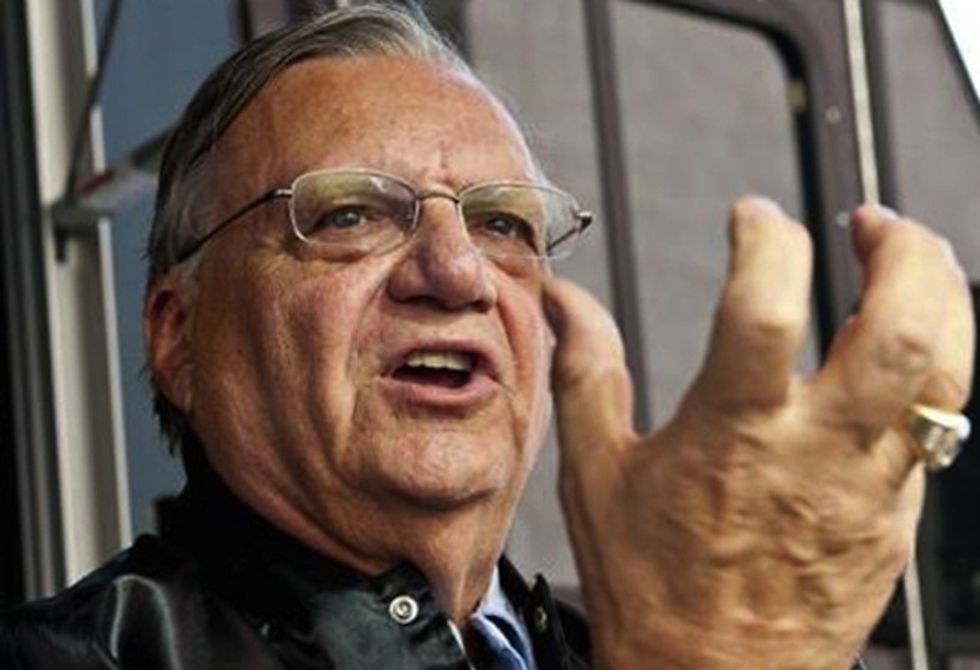 Former Maricopa County County Sheriff Joe Arpaio apparently doesn't know that accepting a presidential pardon can't erase the fact that he was convicted in the first place, so he's been trying to get the entire record of his conviction on charges of criminal contempt of court expunged. Arpaio's Trump-issued Certificate of Awesomeness didn't persuade US District Judge Susan Bolton, who yesterday refused to white out his criminal record. Bolton had already dismissed the case against Arpaio after Trump pardoned him for ignoring court orders to stop profiling Latinos, but pretending he'd never been charged or convicted was farther than Bolton was willing to go:

"The power to pardon is an executive prerogative of mercy, not of judicial record-keeping," Bolton wrote, quoting earlier court precedent.

"The pardon undoubtedly spared defendant from any punishment that might otherwise have been imposed," the judge continued. "It did not, however, revise the historical facts of this case."

The Law-N-Order president's pardon came before Arpaio was even sentenced; the criminal contempt conviction carried a maximum penalty of six months in prison. Arpaio isn't satisfied with not having to do any time, however; he wants his name cleared and any record of his conviction sent down the memory hole. After Bolton's ruling yesterday, Arpaio's attorneys immediately started the process of appealing the decision to the US Court of Appeals for the 9th Circuit.

Disgraced Sheriff Joe Arpaio: Pardon Me, I'd Like To Be Senator

Maybe there's some openings at ICE?

Arpaio wants his record to be as lily white as his ideal version of Arizona, not only because he's reportedly considering running for the Senate, but also because having a conviction on his record could cause further legal troubles. One of Arpaio's attorneys, Jack Wilenchik, told Arizona's Capitol Media Services the pardon prevented any prospect of appealing the decision to try Arpaio before a federal judge, not a jury, and his legal team thinks Arpaio could have won that. (Wilenchik didn't speculate on whether his case was so solid that Arpaio should have turned down the pardon. Hmmmmm.) With the conviction in place, Wilenchik said, it might possibly be used against Arpaio in some future criminal or civil case.

Gosh, that could mean Arpaio's worried there are other things he might still be held accountable for. Shocking. Or maybe (please add InfoWars logo here) Arpaio's simply worried that as a True American Patriot, he'll face continued witch hunts by the enemies of America, like all the people he and his department arrested for suspiciously high levels of melanin. So Joe Arpaio will continue his lonely quest for exoneration, lest he continue to suffer for his dedication to preserving Law and Order as he understands them.

Plus, with that conviction on his record, he might not be able to get a job at the 7-11.

Yr Wonkette is supported by reader donations. Please CLICK HERE to help us build our defense fund, since we're Enemies of the People.