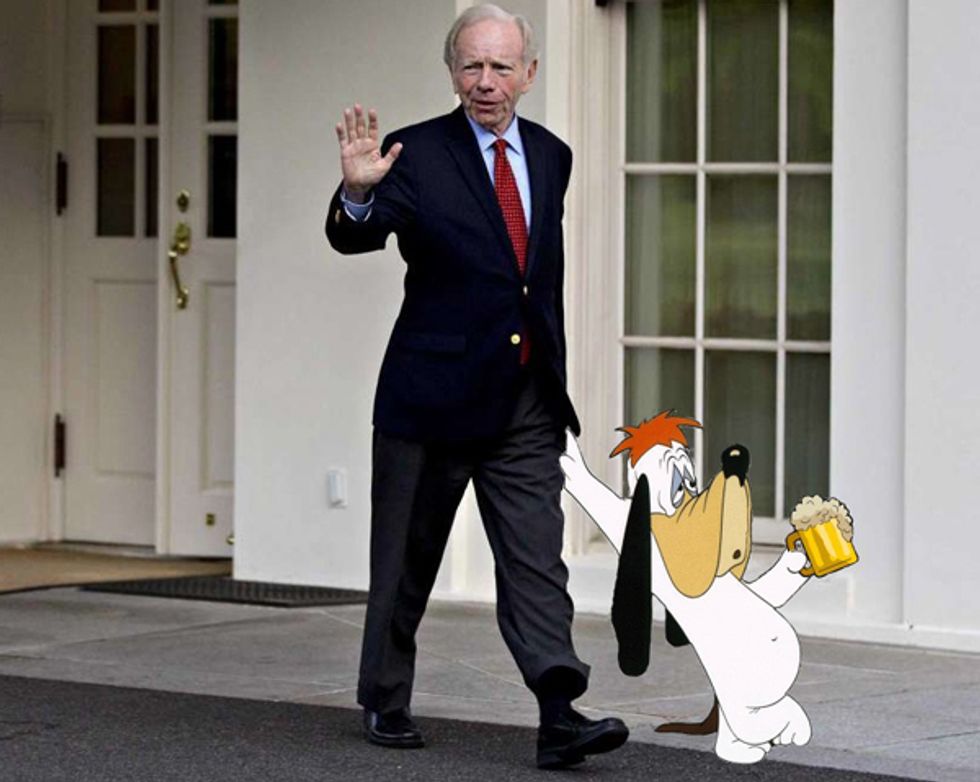 I'll just go back to tripping over this cartoon dog, OK?

In your "another bullet dodged for now" news for today, former Senator Joe Lieberman has officially withdrawn his name from consideration for the job of FBI director, since Marc Kasowitz, a partner in his law firm, has been named to lead Donald Trump's defense in the nonexistent Trump-Russia case that isn't real but would nonetheless be a possible conflict of interest, possibly the first to be recognized by anyone considered for the Trump administration. In a letter announcing his withdrawal, Lieberman thanked Trump for the "great honor" of considering him, but said it was best to avoid any appearance of conflict:

The New York Times reports that while Trump really, really liked Lieberman a lot, if only because his nomination would really piss off Democrats, the former senator

fell out of consideration after objections from several Trump aides, who urged the president to pick a younger candidate with deeper connections to the F.B.I., which has suffered low morale since Mr. Trump’s abrupt dismissal this month of the former director, James B. Comey.

Trump had hoped to name Lieberman to the post before leaving for his big trip to the Middle East and Europe, and whatever Israel is since Trump thinks it's not in the Middle East, but was dissuaded from doing so by top aides, including White House Counsel Don McGahn, who only sounds like a brand of shoe. Maybe Trump ought to consider a wider pool of candidates, the aides suggested, waving away Lieberman's old-man smell.

Mr. Trump, recognizing the sensitivity of the decision in the wake of revelations that he had pressured Mr. Comey to drop investigations into possible collusion between his campaign and Russian operatives, reluctantly assented, according to two administration officials.

We'll read that as "two administration officials being very diplomatic," because you just know there was pouting involved. And you can bet that whoever Trump does name, we'll hear in coming months that if that FBI director refuses to prosecute Hillary Clinton for email treason, Trump will whine he should have gone with Lieberman and never let anyone talk him out of it, because he's surrounded by fools, yes-men, and traitors.

The White House will begin drawing up a new list of candidates, attempting to find nominees who, like Lieberman, lack any law enforcement qualifications but are also likely to roll over for all Trump's whims. Ability to irritate Democrats is definitely a plus, but not an absolute must. Hey, send your resume in, they'll take almost anyone who's read a few mystery novels.

Yr Wonkette is supported by reader contributions. Please click the "Donate" linky to help out!