Joe Manchin Will Cut Whatever Fucking Taxes He Wants, You Think He Gives A Shit? 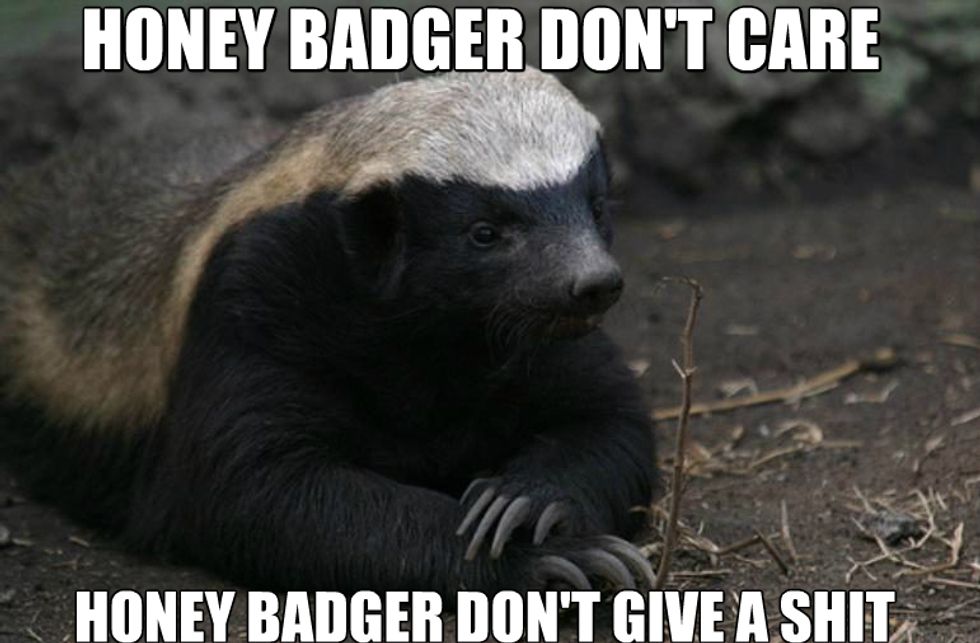 We're NOT saying Joe Manchin is a honey badger. But he don't give a shit.

West Virginia "Democrat" Joe Manchin said in a weekend interview that he's perfectly happy being one of three Senate Democrats who didn't sign on to a letter stating the party's line against Republican plans for a massive tax cut. (For laughs, the Rs are calling it "tax reform," although by all indications, all they plan to do is cut taxes.) Manchin is up for re-election in 2018 and says he supports the Democratic plan, but won't sign the letter because he's all mavericky and stuff, and wants the option of a bipartisan tax bill. Also fairy dust. What's more, he, a Democrat seeking re-election in 2018, says there is simply no way the election is influencing his decision. Heaven forfend!

The Senate Democrats' letter to Donald Trump and to House and Senate leadership outlines three prerequisites for Democratic participation in changing the tax code: the bill should neither raise taxes on the middle class nor benefit the already wealthy; it should go through "regular order" in the Senate, not be pushed through as a reconciliation bill, prepared in secret, that would only need 51 votes to pass; and Republicans must pledge not to endanger tax support for Social Security, Medicare, or Medicaid.

Two other Dems facing re-election in red states that went for Trump, North Dakota's Heidi Heitkamp and Indiana's Joe Donnelly, chose not to sign the letter, but didn't appear to feel the need to insist exactly how non-political their choice was. And of course, it's already pretty much a dead letter anyway. Despite Democrats asking for regular order, Mitch McConnell is already planning to push the tax cuts through using budget reconciliation (and then to complain he got no help from Democrats). You see, the letter told ol' Mitch that the Democrats are simply "not interested in addressing” measures that Republicans think are important, like cutting taxes for the richest Americans. Darn obstructionists!

In any case, Manchin's decision was completely unrelated to political concerns. Really. Last week, he told the Charleston Gazette-Mail,

The bottom line is, if it doesn’t help West Virginia, it doesn’t make sense to me, and just because there’s an election doesn’t mean I sign on or don’t sign on [...] If you look at all the time I’ve been here, there’s stuff I don’t sign on to. I just don’t think it’s a good way to do business when you don’t try to get people from the front end.

After Manchin refused to add his name to the letter, West Virginia's Republican Attorney General Patrick Morrisey, who's running for the Senate against Manchin, said if Manchin wasn't going to support his party, he should resign from Chuck Schumer's leadership team, which Manchin did not appreciate, although he reiterated that he wasn't going to be provoked into responding to such an obviously partisan attack. Here he is, not being provoked:

“I’m not scared of an election, let’s put it that way. Elections do not bother me or scare me. I’m going to continue to do the same thing I’ve always done, extremely independent.”

Manchin then insisted he didn't care who knew it, he is not worried about 2018, you hear him? It would be hard for him to give less of a shit, he is so fucking calm. Now get out of here and stop bringing up unimportant stuff the people of West Virginia don't care about, will you? And he knows what you did with his strawberries, too.

Yr Wonkette is supported by reader donations. We're not cracking up, YOU are. Please click the "Donate" linky to send us money. Like we care. (we really care a lot)