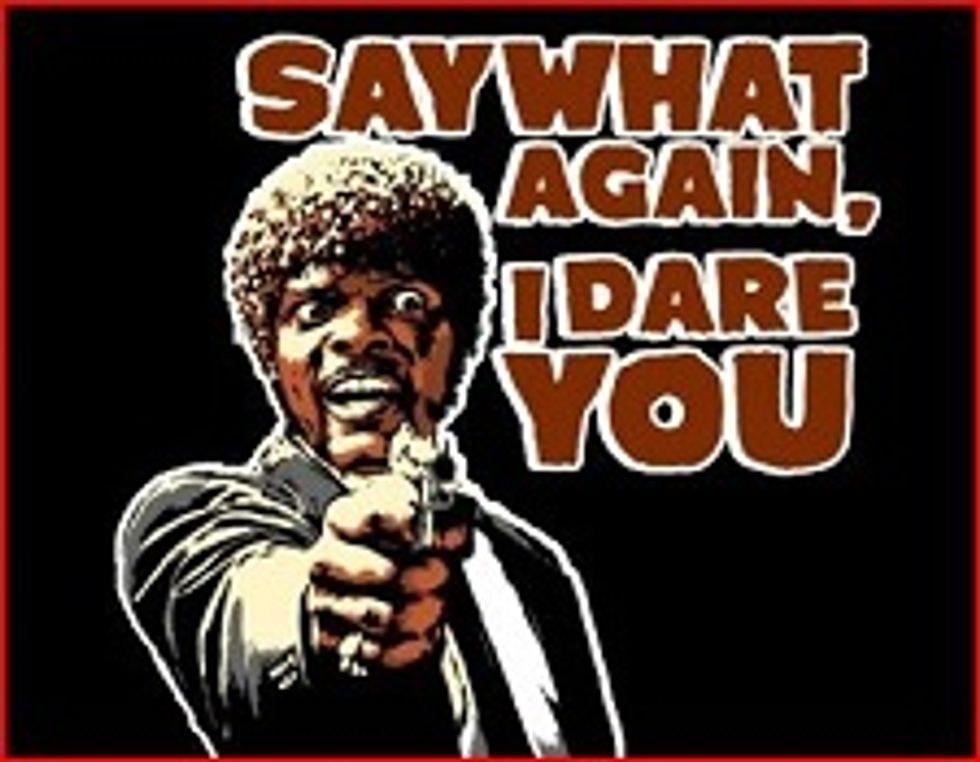 Of all the dimwitted leaking anal polyps rushing to write nine million words this weekend about Friday night’s terrible murder spree, of all the jabbering imbeciles determined to scream that “Guns don’t kill people!” and “Should we ban knives too, libtard?” and “My freedoms, you shall not take them!”, you know what washed-up cultural figure we most anxiously hoped would weigh in? No, not Sarah, Snow Queen of the Tundra. Obviously we were waiting to hear from Samuel Wurzelbacher, aka Joe the Not-Plumber, who took to his website to hunt and peck the letters he needed for words to compose thismasterpiece.

Joe was specifically peeved at Richard Martinez, whose son Christopher was among the dead. Martinez made a couple of appearances on television this weekend to lambaste “craven, irresponsible politicians and the N.R.A.” and the “rudderless bunch of idiots in Congress” who could have stepped up to the plate after Sandy Hook – or Aurora, or Tucson, or really at any time – and passed some gun control laws that might prevent more people from needlessly dying because they are unlucky enough to live in a country with too many angry paranoids who think the Founding Fathers would be most put out if they couldn’t own as many semi-automatic rifles as they can fit in their garage.

Sayeth Joe to the parents of the dead kids:

I am sorry you lost your child. I myself have a son and daughter and the one thing I never want to go through, is what you are going through now. But:

As harsh as this sounds – your dead kids don’t trump my Constitutional rights.

Yr Wonkette is of the opinion that after a tragedy like this, it would behoove all the Second Amendment fetishists to do one simple thing: shut the fuck up. Seriously, just shut the fuck up for a while. No one is planning on taking away your precious, precious penis substitutes. You will still have plenty of guns to fondle so you can feel like the big, macho alpha males you are. You will still have them long after Richard Martinez has buried his dead 20-year-old son and disappeared from your sight.

Because this is the world you have made for the rest of us by falling for all the paranoid garbage Wayne LaPierre spews so you will stay frightened enough to keep his clients rolling in dough by buying their weapons. But all those precious, precious penis substitutes should not and do not insulate you from having to hear the angry words of the grieving parents of the dead kids, or of those of us who are fed up with living in a society patrolled by you angry, heavily armed lunatics who have convinced yourselves and a lot of other people that there is no problem so terrible, no issue so knotty, that it cannot be solved by picking up a gun.

Having to listen to people pissed off at the damage guns do to our country is the price you have to pay in order to own that AR-15 you keep under your bed and the Glock you must have on your hip every time you leave your house so you can go all Rambo on anyone who steps to you, tough guy.

We still have the Right to Bear Arms and I intend to continue to speak out for that right, and against those who would restrict it – even in the face of this horrible incident by this sad and insane individual. I almost said “Obama Voter” but I’m waiting for it to be official.

Taking a cheap shot at Obama supporters before the blood has been hosed off of Isla Vista’s streets? (And Joe was far from the only wingnutdoing so this weekend.) Nice.