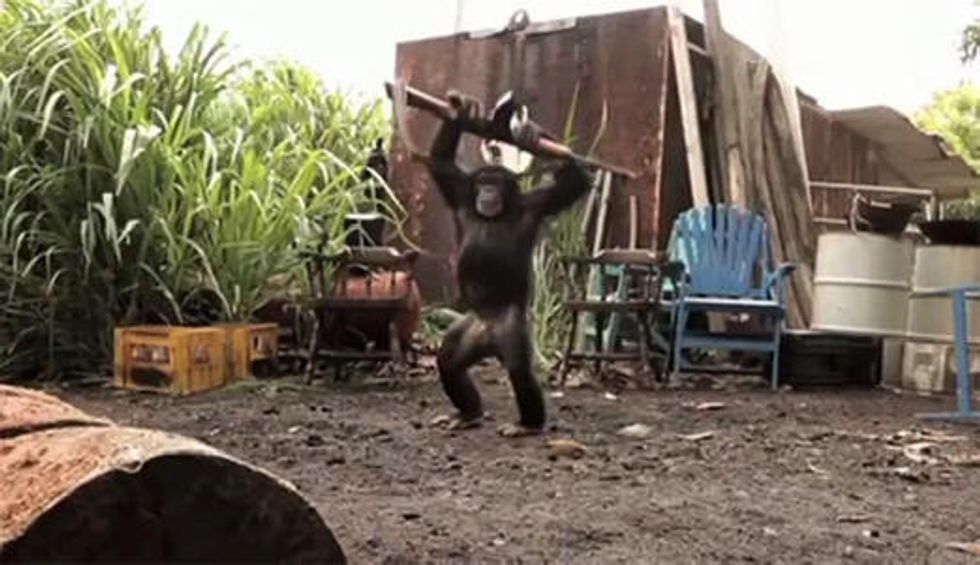 Leading conservative intellectual Joe the Failed Politician Not-Plumber has decided that he has not spewed forth enough frothing filth to remind us all of what a horrible shitpile he is. First, he told the parents of dead kids in Isla Vista to STFU and quit whining about their tragedy because he is a classy fellow. But that was just the tip (heh heh) of the iceberg of stupidity that is Samuel Wurzelbacher:

"Guns are mostly for hunting down politicians who would actively seek to take your freedoms and liberty away from you," Wurzelbacher wrote on Thursday in a blog post on his website.

Remember Giffords? Yeah, she’s the politician who got SHOT IN THE MOTHERFUCKING HEAD, but that was like in 2011, which means it is definitely not Too Soon to talk about ‘hunting down politicians,’ amiright?

In this follow-up post on his website (no link, because fuck that guy), Wurzelbacher notes that liberals don’t actually care about people dying from guns:

Left-leaning politicians and their lapdogs in the mainstream media want to use this “crisis” to further chip away our rights. They want to use these deaths to gain more power and more control. They only care about the victims so long as they serve a purpose:

The killings are useful, the grieving an opportunity, the survivors are props in a staged circus of phony outrage, but with real people now damaged by the very policies the Marxists hope to arrange more of.

Hahaha, the parents of young men and women gunned down by a misogynist asshole sure do have phony outrage! Look at those props, the parents crying for the television as if they actually loved their kids! Thank god Wurzelbacher is here to speak derp to tragedy. He knows that the real damage in Isla Vista was that too few people were strapped, and that gun control freaks are apparently hoping to arrange more tragedies.

We really don’t have enough words in the universe to adequately say fuck this guy. Despite dozens of children dying in Newtown a few years ago, plus the hundreds of gun deaths since then (including Isla Vista), politicians still kowtow to the NRA and gun-loving asshats like Wurzelbacher and refuse to enact even the most pansy-ass reforms. Does anyone really think Congress will act this year on gun control legislation? Of course not! Why invest time and energy in crafting policies that could keep Americans safe when you can instead spend time and energy holding eight gazillion more hearings on non-scandals like the IRS or Benghazi?

In the face of tragedies like Isla Vista, Our Glorious Editrix tried to remind people that not everything in the world sucks. As for Wurzelbacher:

As far as me being nice, cordial, respectful – don’t hurt people’s feelings… bla bla? We tried that and look where it got us?

First off, when has the gun-fondling community ever been nice, cordial, or respectful? There are plenty of stories about intimidation and dickishness. And second, there haven't been any goddam reforms! There is no Kenyan Socialist Gun-Grabber coming to steal your guns at night. For all the paranoia peddled by dumb fucks like Wurzelbacher, nothing has actually been done to curtail gun-fetishists from owning as many manhood-supplements they want.

But maybe he has a point for those of us in favor of reasonable gun control legislation: Where has being cordial gotten us, other than tragedy after tragedy after tragedy? Blood money from the NRA still pollutes the coffers of politicians, resulting in inaction, cowardice and fear. Richard Martinez, father of one of the victims in Isla Vista, got it right:

We couldn’t have said it better ourselves. Of course, we would have added, “And fuck that Wurzelbacher asshole,” which is why we would make bad liberal ‘props.’