John Boehner Cries; It's Beginning To Look a Lot Like Shutdown 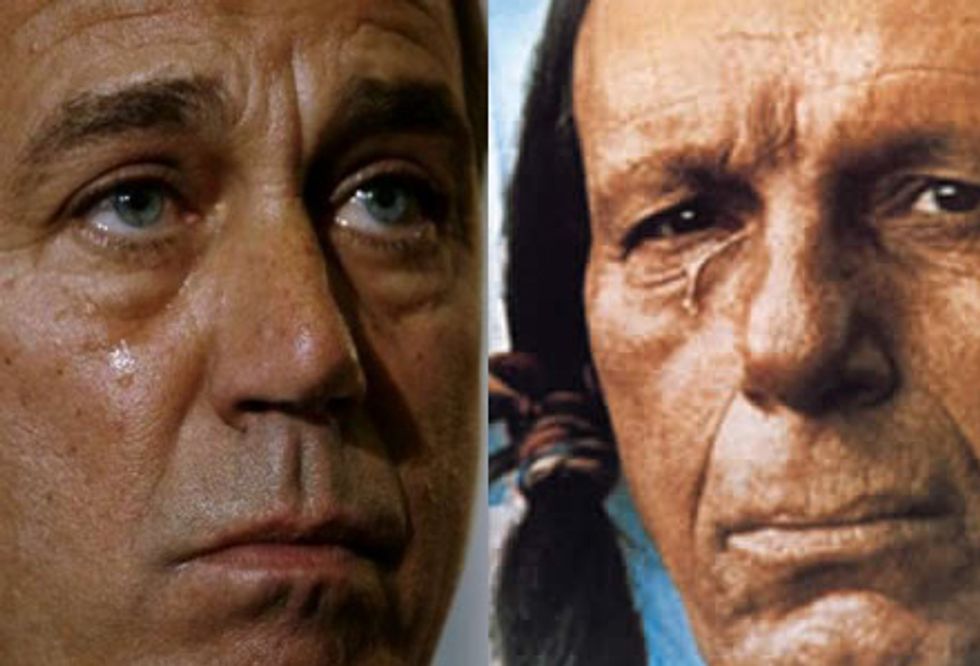 Last night, John Boehner and Harry Reid met for the most exciting event in human history: budget negotiations to avert a government shutdown. And Boehner returned to his caucus to deliverthe sob heard 'round the country. "He cried, but only briefly," said "one person at the meeting" to ABC News. Yes, it looks like the government is going to shut down tomorrow night. (Hopefully forever? We were getting sick of this country and law and order anyway.) Republicans are trying once again to get exactly what they want incrementally through another stopgap extension, but this time, Democrats are STANDING UP for spending money on some stuff. Boehner's tear ducts are stockpiling now. The Great Boring War is coming.

Many people and programs and events will be affected if the government is shut down. But both sides are focusing on members of the military, because something all Americans can agree on is liking the people who fight our unnecessary overseas invasions and occupations, and they can't agree on things that actually help or serve Americans. The troops will not receive paychecks if shutdown happens, and this is pretty much the only thing that concerns Republicans.

The one-week stopgap drafted by House Republicans would provide money through Sept. 30 for the Pentagon, which has said the budget fight is causing considerable problems for the military. The inclusion of the military spending should win support for the bill even from House conservatives who had previously said they would not back any more temporary spending measures. It also allows Republicans to say they are making certain that troops fighting overseas do not miss a paycheck.

See, there you go. This stopgap would allow many other shutdown threats and stopgap incremental wins to happen in that period time, and Republicans wouldn't have to worry about people saying they insufficiently love the troops.

But it doesn't look like Democrats will give in on this (probably because they hate the troops). [ABC News/NYT]