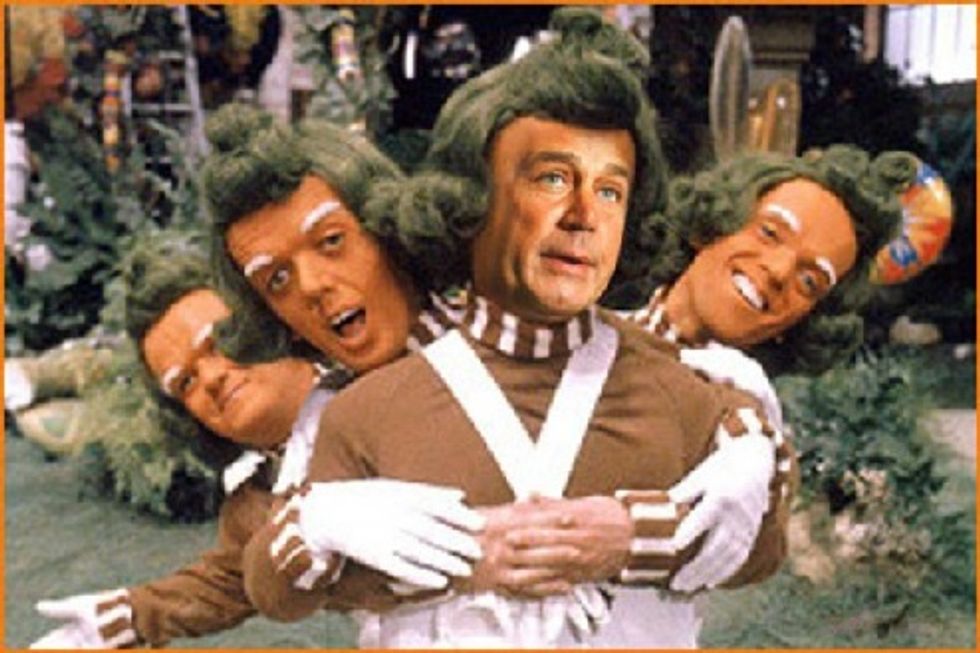 We really hope that thisNew York Times story from Thursday is true:

Speaker John A. Boehner has privately told Republican lawmakers anxious about fallout from the government shutdown that he would not allow a potentially more crippling federal default ... Mr. Boehner’s comments, recounted by multiple lawmakers, that he would use a combination of Republican and Democratic votes to increase the federal debt limit if necessary appeared aimed at reassuring his colleagues -- and nervous financial markets -- that he did not intend to let the economic crisis spiral further out of control.

It would be really nice to think that Orange Julius is willing to set aside the "Hastert Rule" that would normally only move bills to the Senate if they can be passed with a Republican majority; while it's possible that the "Let's crash America into a mountain to stop Obamacare" wing of the GOP might respond by taking away his Speakership (Speakerdom? Speakerhood? Speakercy?), we should not discount the possibility that he might also look forward to no longer trying to ride herd over the crazies in his own party.

There's no question -- at least, among sane people -- that a failure to increase the debt limit would be far worse than the current shutdown. So maybe, just maybe, Boehner is calculating that he can let the teahadis have a nice rant against the gummint and the Marxist plot to expand private health insurance, even with a shutdown that is hurting people, but that he'll also draw the line at letting them crash the world economy for the sake of "not allowing more debt."

While the NYT reports that several legislators have said Boehner assured them that he wouldn't allow a default, his spokesman, Michael Steel, is sticking to the we-demand-concessions script:

“The speaker has always been clear that a default would be disastrous for our economy,” Mr. Steel said. “He’s also been clear that a ‘clean’ debt hike cannot pass the House. That’s why the president and Senate Democrats should drop their ‘no negotiations’ stance, and work with us on a plan to raise the debt limit in a responsible way, with spending cuts and reforms to get our economy moving again and create jobs.”

It's not clear how far the Speaker intends to ride that wave of bullshit; the hope among the business wing of the Republicans seems to be that teabaggers' "victory" in bringing government to a standstill over the budget will get the Screaming Rageys out of their system. Haha, good one -- those guys have endless reserves of rage. Even so, we'd like to think that some kind of token concession -- how about repealing the tax on tanning beds? -- might be enough face-saving to get a debt ceiling deal. Maybe. Sorta-kinda.

And John Boehner? We can't think of a nicer guy to fall on his sword for the sake of not imploding the economy.