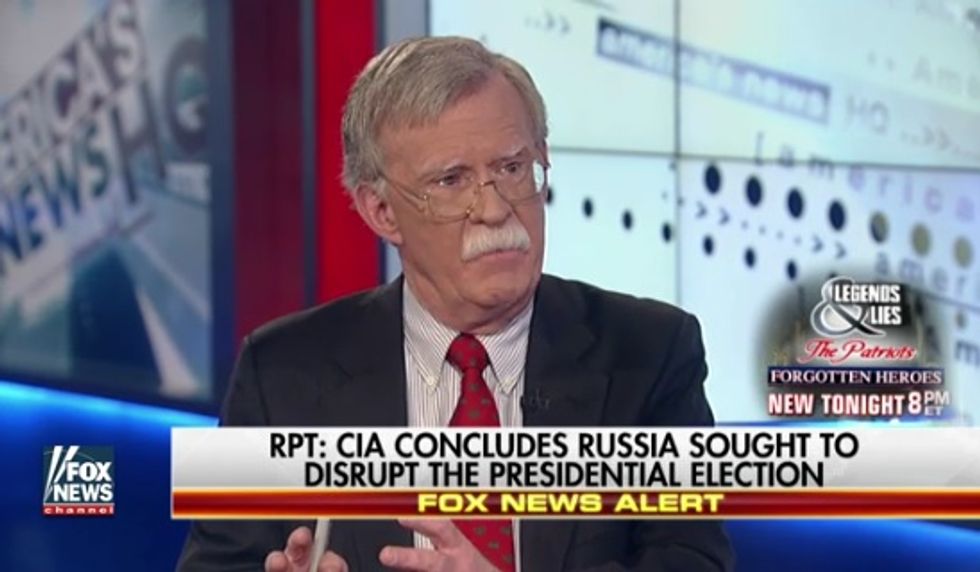 So here's longshot Secretary of State candidate and all around War Monkey John Bolton offering his evidence-free Hot Take on the Russian hacking story: Maybe it was all just a "false flag" by the Obama administration, because that's a perfectly responsible idea to float. Oh, did we mention that if Bolton doesn't get SecState, he's likely to be offered a job as a deputy Secretary of State, as a backup? Reassuring! We should point out from the beginning that as far back as July, even computer security experts outside the government were already pretty sure Russia had hacked the DNC; the only new wrinkle added by the latest reporting is about the motive: The CIA briefed Congressional security leaders that Russia's hacking was an attempt to influence the election in Donald Trump's favor.

You really have to admire Bolton's logic-like thinking in his interview with Fox News reporter Eric Shawn: Since FBI Director James Comey didn't find any evidence of foreign hacking on Hillary Clinton's email server, and everyone KNOWS she was hacked like 40 million times, then where does the CIA get off saying they have some way of telling where the hacks of the Democratic and Republican National committees, the Clinton campaign, and others were coming from?

“It’s not at all clear to me just viewing this from the outside that this hacking into the DNC and the RNC computers was not a false flag operation,” Bolton said. “The question that has to be asked is, why did the Russians run their smart intelligence service against Hillary’s server but their dumb intelligence services against the election?”

Also, how can anyone know anything, especially if it might make Donald Trump's good friends the Russians look bad? Now, Yr Wonkette is not a computer security expert, but we're going to go way out on a limb here and take a wild guess that perhaps Hillary Clinton's server was never hacked? (We think James Comey might have said a thing or two about it to placate his rabid Hillary-hatin' wife if there were any evidence for it at all.) Either way, we're pretty sure that the automatic conclusion that the CIA's conclusion was nothing more than the Obama administration lying is probably not likely to hold up to scrutiny. But it'll sound great in the rightwing fever swamps -- and once Alex Jones repeats it, Donald Trump will have all the proof he needs.

Bolton did at least call for "very severe consequences" if it could be proven some dirty foreigners were behind the hacks -- or, you know, a 400-pound guy on a bed somewhere -- but was skeptical whether any any intelligence service would leave behind any "cyber fingerprints," especially considering Hillary Clinton was able to get away with sending emails, or something.

Shawn asked whether Bolton was accusing the administration or the intelligence community of “trying to throw something.”

“We just don’t know,” Bolton replied. “But I believe that intelligence has been politicized in the Obama administration to a very significant degree.”

Shawn pressed him: “But would the intelligence officials politicize this — to go so far to something that could potentially damage the very issue of our republic and what we for 200-plus years have stood for?”

“I think the whole thing is called into question, which is why the notion of some kind of independent investigation becomes extremely important,” Bolton said. “I do think it’s critical to answer the question I posed: If you think the Russians did this, then why did they leave fingerprints?”

Gosh, if a person were really cynical, they might almost think Bolton was trying to suggest the Russians are just the bestest hackers around, and so it just doesn't make any sense they'd leave any trace of their activities. We're going to wait and see what the tech experts -- especially geek god Bruce Schneier -- have to say about Bolton's false flag theory, if you don't mind, because while John Bolton is really good at calling for the U.S. to bomb Iran and just about everyone else, his reputation as a computer security expert is pretty much nonexistent.

Near the end of the interview, Shawn pointed out to Bolton that accusing the Obama administration of just plain making up the Russian hacking was "incredibly serious to say that and very disturbing as an American," to which Bolton confidently replied that of course he wants a full investigation of whoever it was that tried to make it look like Russia was responsible for the hacks:

We would want to know who else might want to influence the election and why they would leave fingerprints that point to the Russians. That’s why I say, until we know more about how the intelligence community came to this conclusion, we don’t know whether it’s Russian inspired or a false flag.

It sure is reassuring to know that Team Trump, which sent surrogates to all the Sunday gabfests to ridicule the very idea that Russia may have tried to influence the election, is so worried about the possibility the Obama administration is playing politics with such an important matter as national security.