John Conyers Steps Down From House Leadership For Being Convicted Of MURDER ... Of Our Hearts! 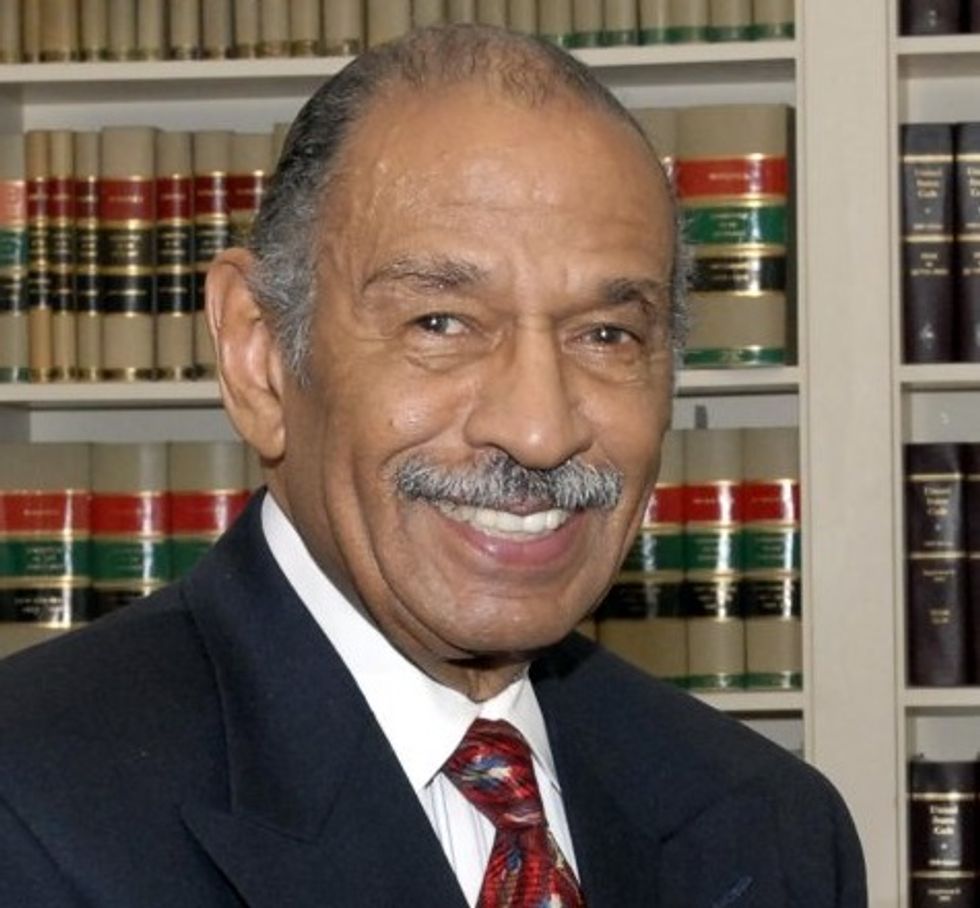 Rep. John Conyers, the Michigan Democrat who's the longest-serving member of the House, has stepped down from his leadership role as ranking member of the House Judiciary Committee after it was revealed last week that he'd settled a sexual harassment complaint brought against him by a former aide. Documents from the case alleged that Conyers had made sexual advances toward women who worked for him and that he asked staff to help him manage his extramarital affairs. Conyers is under investigation by the House Ethics Committee.

Another day, another gross story.

One good thing is coming out of the revelations about Conyers, and the claims agains Al Franken in the Senate: Congress may -- once it takes care of the really important work of cutting taxes on the super-rich -- modify a 1995 law that requires parties in harassment complaints against members of Congress to sign confidentiality agreements. As we've discussed, the existing process of handling such cases is just this side of Kafkaesque and designed to make transparency next to impossible:

In the House, a bipartisan group of lawmakers, led by Representative Jackie Speier, Democrat of California, and Representative Barbara Comstock, Republican of Virginia, is pushing for legislation that would require claims to be handled in public. In the Senate, Senator Kirsten Gillibrand, Democrat of New York, has put forth similar legislation.

“It was a system set up in 1995 to protect the harasser,” Ms. Speier said on the ABC program “This Week,” adding, “We say zero tolerance, but I don’t believe that we put our money where our mouths are.”

One major question, however, is whether the Speier-Comstock legislation should apply retroactively, meaning that those who have paid past settlements would now be identified. The legislation would cover any settlement reached since the beginning of this year.

So now we get to have a debate over how much protection past harassers who are still in Congress should have, which should make for a pretty disturbing whip count. If it's more Democrats than Republicans, expect the majority to insist on full disclosure, since healing can only begin with transparency, but if it's more Republicans than Democrats, then obviously there's no need to go digging into matters that are long past and which all the parties had agreed to, because that would be really unfair to folks who thought everything was all over, and how can healing ever begin if we insist on reopening old wounds?

Ohio Republican Senator Rob Portman said he'd be in favor of retroactive disclosure, while House Minority Leader Nancy Pelosi said she's fine with perpetrators being exposed, but if victims don't want to be named publicly, they shouldn't have to be unmasked:

“All of these nondisclosure agreements have to go,” Ms. Pelosi said on “Meet the Press.” But, she said, “if the victim wants to be private, she can be.”

An attorney who represents sexual harassment victims, Debra Katz, said some women would not want to be exposed along with perpetrators:

For a number of my clients, that’s the last thing in the world they would want and could have life-altering consequences [...] They settled their cases to be able to move on with their lives while protecting their privacy.

But Lisa Bloom, who represents the woman who settled in the Conyers case, said the nondisclosure agreement had prevented her client from speaking publicly, and asked Conyers to release the woman from the agreement so she could go on the record. So there's an idea: If there's going to be retroactive disclosure of past settlements, maybe give the victims a say in whether their names would be redacted? We are not lawyers, but maybe that could work, huh?

As for Conyers, we aren't sure his lawyer, Arnold Reed, is doing him any favors:

On Wednesday, Mr. Reed had said in an interview that Mr. Conyers believed that some of those suggesting that he step down, including fellow Democrats, had been scheming for years to push him out of his Judiciary post.

Conyers's decision to step down from Judiciary -- "temporarily" forever -- was apparently brokered with some nudging from Nancy Pelosi, who didn't quite call for him to step down on the Sunday shows, but also said, before he actually said he'd step down, that she was sure he'd "do the right thing," at least now that he had been exposed for doing the wrong thing. And yes, as we said before, even though the information appears to have come out as the result of Republican ratfucking, that doesn't make the settlement -- and the allegations in it -- not exist.

In other news, Donald Trump Jr. would like you all to know that "boys being boys" has never ever been a problem, at least not until there was such a thing as the New York Times. He really is a smart, smart man.

Yr Wonkette is supported by reader contributions. Please click here to send us money, and we can all smash the patriarchy together.