John Cornyn Meant To Say We Need F-22s To Bomb *China*, Not India 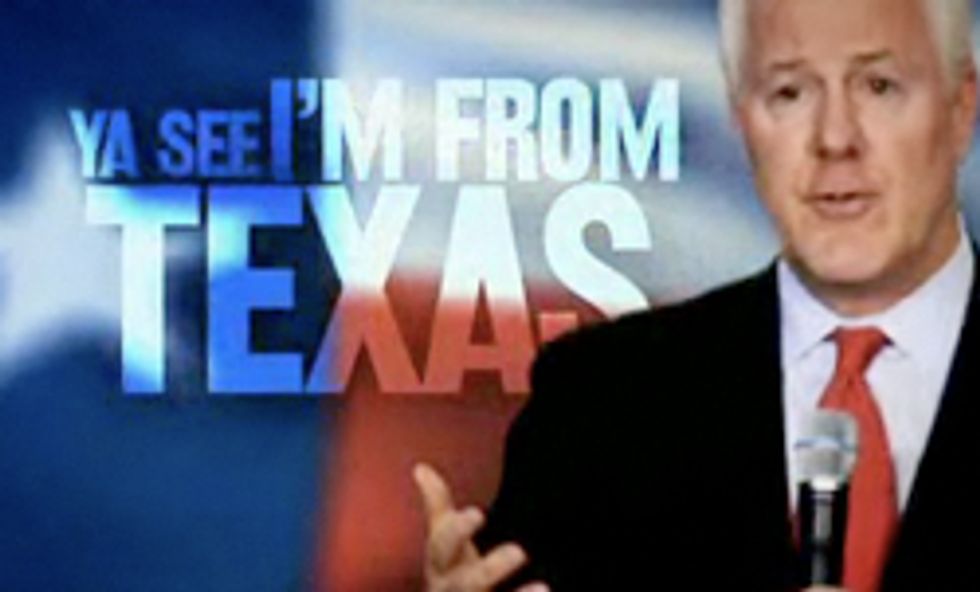 Like many proud leaders of the Grand Old Party, Texas Sen. John Cornyn recently said something inappropriate and terrible and damaging to his country while defending something expensive, war-related, and unnecessary.Last week he argued against curtailing the Pentagon's F-22 program on the grounds that we will need those bad boys to bomb various countries in the future. He then listed four countries that the United States currently has no intention of bombing, one of which was INDIA -- the American ally -- what with the "increased exercise of their military power." Ha ha, eat an ICBM of dicks, India! But this was all just a misunderstanding, according to Cornyn's spokesman. He meant to say that we need F-22s to bomb China soon. China. This just clears everything up! Cornyn/Santelli 2012...

"It (the F-22 program) is important to our national security because we're not just fighting wars in Afghanistan and Iraq,'' Texas’ Republican Senator John Cornyn said in a TV interview. "We're fighting we have graver threats and greater threats than that: From a rising India, with increased exercise of their military power; Russia; Iran, that's threatening to build a nuclear weapon; with North Korea, shooting intercontinental ballistic missiles, capable of hitting American soil."

Turns out the Senator had a 'slip of the tongue.'

"Senator Cornyn misspoke saying 'India' when he meant to say 'China.' As Founder and Co-chairman of the Senate India Caucus, no Senator has greater respect or admiration for India or values our relationship with them more. Sen. Cornyn regrets the mistake and apologizes for any misunderstanding this may have caused," his spokesman Kevin McLaughlin clarified after the remarks were brought to his notice.

Ah yes, the "Senate India Caucus," we all are familiar with Senator Cornyn's very important work there, about India, and the Indians -- "dot-dot" Indians, of course, not "naked dream-catchy Mexican" ones.

But wait, was that about bombing China with F-22s soon?