John Edwards And Rielle Hunter Broke Up Last Week, Or Possibly In 2008 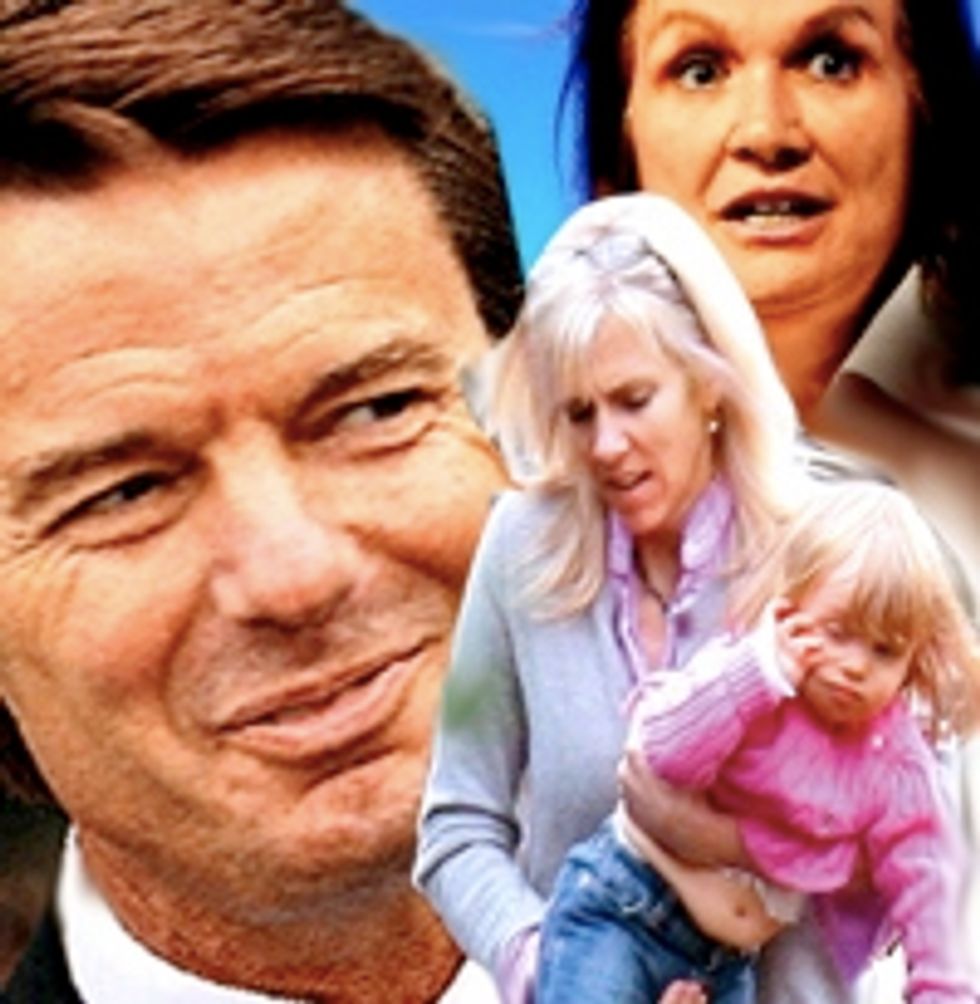 You guys, extra-sad news! John Edwards and Rielle Hunter, who as far as we knew six days ago were America's number one committed couple, are now totally broken up. Well, they're still a family, because when you knock up your crazy new age-y campaign videographer and/or are knocked up by a married sleazeball presidential candidate, and then have a baby, you are basically linked for life, but "as of the end of last week, John Edwards and I are no longer a couple," Rielle told important journalistic teevee show Good Morning America. So if you step outside and find that it's raining even though the forecast called for clear skies, that's probably angels crying! (Or maybe just water dripping from an air conditioning unit in a fifth-floor window.) But are John Edwards and Rielle Hunter still in love, despite breaking up? It's impossible for us to say for certain, but yes, almost certainly yes.

Hunter's public statements don't explain what the motivation for the ending of history's greatest romance could be, so let's speculate irresponsibly! Remember how John Edwards and Rielle Hunter had a baby that everyone pretty much knew about by mid-2008 or so, but Edwards never publicly acknowledged her as his daughter until the criminal charges against him went away, due to jury disgust in thinking about any of this, for legal purposes? Well, maybe his lawyers advised him to not change his Facebook relationship status until this was cleared up, also for legal purposes, which we don't understand why that should be but we're clearly no legal experts because we think the individual mandate is constitutional. Anyway, now that he's finally certainly not going to jail, he can dump Rielle and go make sex to juror #4 or whoever.

But here's another possibility! Let's revisit that very first bonkers public interview Hunter gave about all this, to GQ back in 2010, when she said the following somewhat disconcerting things:

Why and when did the affair end? Or did it ever end?

My stint as a mistress ended July 2008. And then our relationship evolved into something different.

That was when the National Enquirer — the whole Beverly Hilton thing. That changed our relationship. It changed him; it changed everything. And my stint as a mistress ended. And I was and am happy about that. [laughs]

Now maybe after John and Elizabeth separated John and Rielle got back together or maybe "my stint as a mistress ended" means some new age-y thing like "I became his primary partner in the eyes of chakra healing crystal aura something," but maybe also they just broke up then and the Post's tales of canoodling were misinterpreted? But their relationship continued, for years, in Rielle's mind? Or they were one of those couples who "break up" but then continue having sex and spending all their time together and so nobody understands exactly what they meant by "break up." Whatever, it's 100 percent splitsville now, for both of them!

Oh but don't worry, because even though they are not a couple, they are still in love, Rielle told GMT:

Hunter said she still loves Edwards despite the difficult split. "I do," she told Stephanopolous.

And she insists he still loves her too.

And oh hey, did Rielle tell GQ that they were still in love, back in 2010?

We love each other very much. And that hasn't changed, and I believe that will be till death do us part. The love doesn't go away. It's unconditional. It's unconditional on my part, but our connection is profound. There's a lot of passion there.

So there you have it: Rielle Hunter and John Edwards broke up last week, or four years ago, or maybe repeatedly over the past four years, but are still in love. We would like to assure you that this is the last you will hear from Wonkette on this subject, but we all know that would be a lie. [AP/GQ/NYDN]