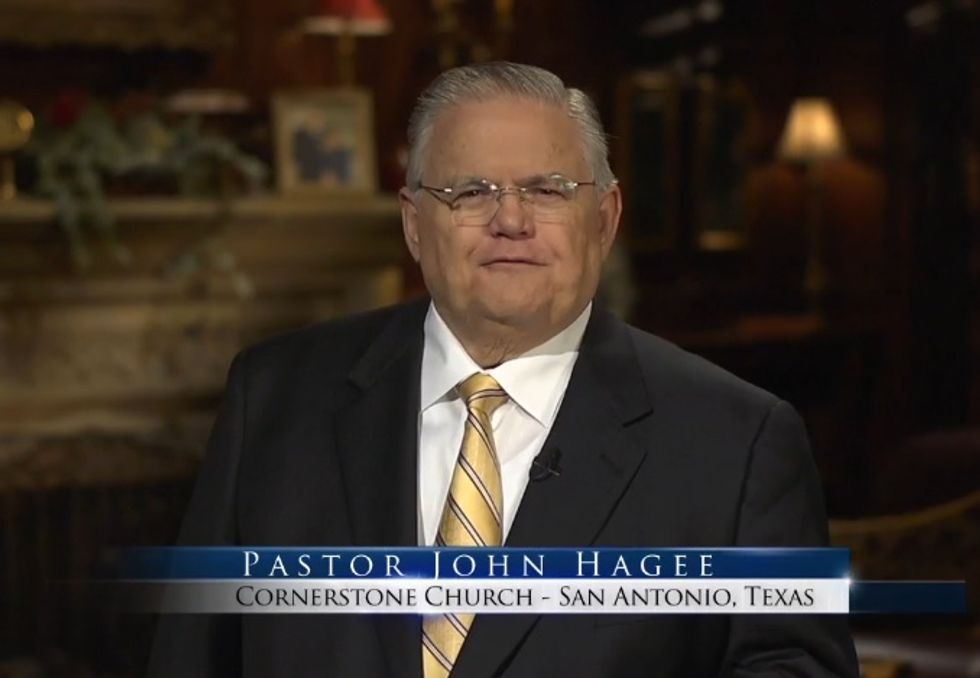 Wingnut San Antonio pastor John Hagee, who memorably explained that the Holocaust was God's gift to the Jews so they could return to Israel, told the Zionist Organization of America Sunday that Barack Obama is anti-Semitic because he is too friendly with Iran.

Hagee noted reports that the president is negotiating with Iran and asserted that he “is anxious to accommodate Iran and its nuclear ambitions. The executive branch… is in the hands of one of the most anti-Semitic presidents in the history of the United States of America.”

He mocked Obama for calling the U.S.-Israeli relations unbreakable. “He knows it’s unbreakable because he’s been trying to break it for the last five years,” Hagee said.

Hagee, who is the head of something called "Christians United for Israel" -- one of those groups that wants Israel to be safe and secure so it can be destroyed in the battle of Armageddon and then all the Jews will convert to Christianity -- was speaking at a dinner where he and Ted Cruz received awards for being awesomely pro-Israel.

The ZOA is apparently all good with Hagee, even after Sen. John McCain repudiated the pastor in 2008 over his charming 1999 sermon that explicated how the Holocaust was all part of God's wondrous plan. According to Hagee, God sent Hitler to hunt European Jews and drive them back to the land of Israel where they belonged, in fulfillment of prophesy:

Going in and out of biblical verse, Hagee preached: "'And they the hunters should hunt them,' that will be the Jews. 'From every mountain and from every hill and from out of the holes of the rocks.' If that doesn't describe what Hitler did in the holocaust you can't see that."

He goes on: "Theodore Herzl is the father of Zionism. He was a Jew who at the turn of the 19th century said, this land is our land, God wants us to live there. So he went to the Jews of Europe and said 'I want you to come and join me in the land of Israel.' So few went that Hertzel went into depression. Those who came founded Israel; those who did not went through the hell of the holocaust.

"Then god sent a hunter. A hunter is someone with a gun and he forces you. Hitler was a hunter. And the Bible says -- Jeremiah writing -- 'They shall hunt them from every mountain and from every hill and from the holes of the rocks,' meaning there's no place to hide. And that might be offensive to some people but don't let your heart be offended. I didn't write it, Jeremiah wrote it. It was the truth and it is the truth. How did it happen? Because God allowed it to happen. Why did it happen? Because God said my top priority for the Jewish people is to get them to come back to the land of Israel."

Hagee later apologized for his insensitivity in putting it that way, although he did not retract the notion that God planned the whole thing.

On the other hand, Barack Obama hasn't gone to war with Iran over its nuclear program, so he's pretty much the worst thing since Hitler, if Hitler was a bad thing, considering the larger picture.

Hagee apparently did not offer any insight Sunday into whether God had sent Barack Obama to toughen up the Jews in adherence with prophecy, or if maybe Obama is merely an anti-Semite on his own time.