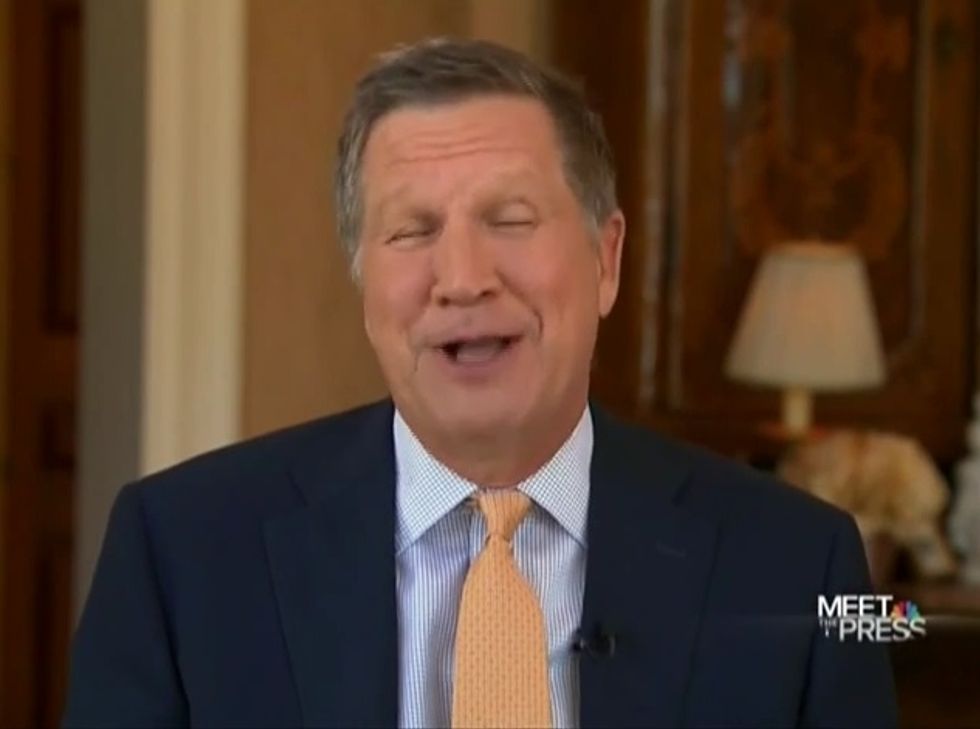 This screengrab is so mean, but why not?

Republican presidential candidate John "The Moderate One" Kasich raised the ire of yr Wonkette, and also probably all Latino voters who ever lived, by asserting last week that, unlike that Donald Trump character, he cherishes the Mexican Spanishes:

“A lot of them do jobs that they’re willing to do and, uh, that’s why in the hotel you leave a little tip,” said Kasich before a small group inside the Shady Canyon Golf Club, nestled in a gated Irvine neighborhood. [...]

“This lady wrote me in my hotel there in L.A. She wrote this note. It said, ‘I really want you to know that I care about your stay.’ Is that just the greatest thing?” he said. “So, you know, we can learn a lot and she’s Hispanic, ’cause I didn’t know it at the time, but I met her in the hallway — asked her if I could get a little more soap,” said a chuckling Kasich.

Isn't that the greatest thing? A little more soap! That's why you leave a little tip! Anyway, what he was saying is that Mexicans are just the best, but guess the liberal media misunderestimated what he was saying, because now he's had to clarify that yes siree, he definitely understands that #NotAllMexicans are hotel maid ladies. Hell, some of them even have big time jobs!

"I've always said that Hispanics are such a critical part of the fabric of the United States. They occupy jobs from top to bottom. They're so critical to our country. They're God fearing and they're hard working," he said. "And that means that they hold very important positions. I've got a friend right now who's a doctor. He's a doctor in oncology, you know. I mean, that shows you how crazy it can get in this business."

"To be clear," Kasich said, "I believe that, from top to bottom, Hispanics play a critical role in America, not only today, but going forward."

This Mexican oncologist wrote John Kasich a note. It said, "I really want you to know that I care about your cancer body." Isn't that just the greatest thing? So, you know, we can learn a lot, and he's Hispanic, 'cause I didn't know it at the time, but I met him in the hallway -- and I gave him a little tip!