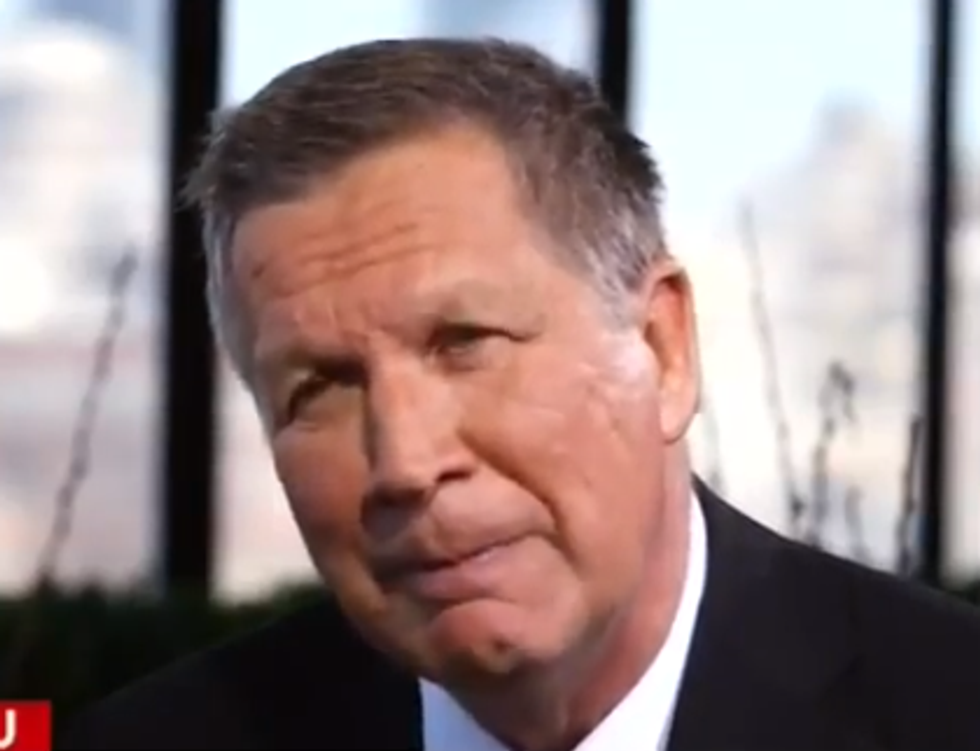 [wonkbar]<a href="http://wonkette.com/600540/moderate-john-kasich-wishes-gays-and-gay-bashers-would-just-be-sweet-to-each-other"></a>[/wonkbar]Poor John Kasich, he's really starting to let his freak flag fly. He's still clinging to his delusion of winning a contested convention like it's a gun or a Bible. And he's been trying so hard to figure out what to say about all the "religious freedom" gay-bashing laws flooding America right now. Discrimination is bad! But religious freedom is good! Can't we all just BE SWEET?

Now he has added a new element to his argument! Gays, are you upset because you've been discriminated against in employment, housing or basic goods and services? Transgenders, do you do the pee-pee dance so much it's basically a fucking pee-pee ballet at this point, on account of how it's illegal for you to pee now? Well have you considered saying some prayers for the people who discriminate against you?

BASH: You ... had some tough words for Mississippi's new laws, where you can deny somebody service because they're gay. You said, quote, "What the hell are we doing in this country?" Are there any steps you would take to try to stop states from passing these laws?

KASICH: No, I wouldn't, but ... here's what I think. There is a legitimate concern for people being able to have their deeply held religious beliefs, religious liberty. But there's also people who we shouldn't be discriminating against. We need to have a balance. ... And I just wish everybody would take a breath and calm down, because you see, trying to figure out how to legislate that balance is complicated and you keep doing do-overs because nobody gets it right.

So if we would just kinda calm down here, I think things would settle down. And what I like to say is just relax, if you don't like what somebody is doing, pray for them! And if you feel as though somebody is doing something wrong against you, can you just for a second get over it?

YEAH YOU GAYS, GET OVER IT. If you get gay-bashed, could you just take a moment to smell the roses, with your broken gay-bashed nose, and maybe pray about your bad attitude? RELATED: Last week, Kasich said ladies wouldn't get raped so much if they just stay away from "parties where there's a lot of alcohol." And if you don't heed his advice and you get raped, you probably should just get over it and say a prayer for your rapist.

Now, since you are all homosexuals and probably don't know the first thing about praying, Wonkette has written a few nice prayers for you to read to God if you're being discriminated against:

Those are some really good prayers. So hey gays and BLTs, you heard what John Kasich the huggy "moderate" said. Now get on your knees and start chatting with Jesus.