JOHN MCCAIN, ARE YOU OK? DO YOU NEED TO FIND A POLICEMAN OR A GROWNUP? 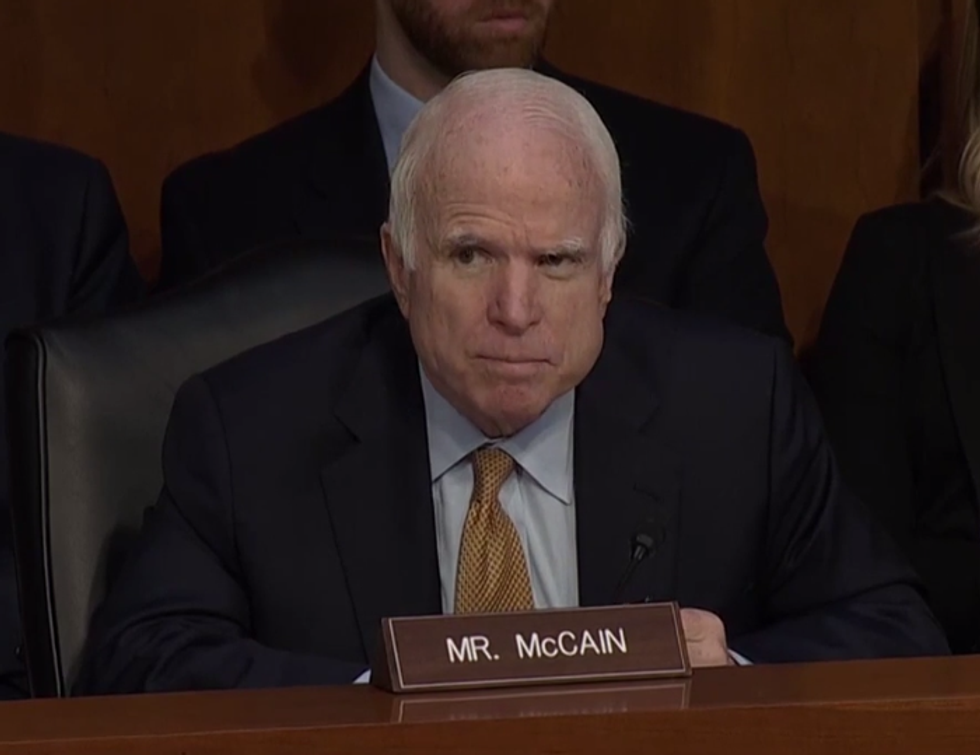 [wonkbar]<a href="http://www.wonkette.com/618342/happy-comey-day-lets-liveblog-story-time-with-uncle-jim"></a>[/wonkbar]Well children, we learned a bunch of new things Thursday morning when we all climbed on Uncle Jim Comey's lap and let him read us stories about Donald Trump! But one of the most memorable moments of the hearing came at the end when Senator John McCain, an "honorary" member of the Senate Intel Committee, dropped some SICK questions on Comey, and by "sick" we mean we are kind of worried his brain came down with a case of genital warts this morning.

Here are McCain's questions to Comey. We will not include Comey's answers, because Wonkette's answers are funnier than Uncle Jim's:

In the case of Hillary Clinton you made the statement that there wasn't sufficient evidence to bring a suit against her, although it had been very "careless" in their behavior, but you did reach a conclusion in that case that it was not necessary to further pursue her. But at the same time, in the case of Mr. Comey, you said that there was not enough information to make a conclusion. Tell me the difference between your conclusion as far as former Secretary Clinton is concerned, and mister, Mister Trump.

That investigation of any involvement of Secretary Clinton or any of her associates is completed.

Yes. The investigation into her emails. Which wasn't about Russia.

Well at least in the minds of this member there's a whole lot of questions remaining about what went on, particularly considering the fact that, as you mention, it's a quote "big deal," as to what went on during the campaign. So, I'm glad that you concluded that part of the investigation, but I think the American people have a whole lot of questions out there, particularly since you just emphasized the role that Russia played. And obviously, she was a candidate for president at the time, so she was clearly involved in this whole situation where fake news, as you just described it, big deal, took place! You're gonna have to help me out here.

In other words, we're complete the investigation of anything that former Secretary Clinton had to do with the campaign is over, and we don't have to worry about it anymore?

Comey tried to explain that, but WALNUTS!!!!!111! perhaps took a break to eat some mashed peas or maybe take a nap, because he still didn't get it:

So but at the same time you made the announcement there would be no charges brought against then-Secretary Clinton for any activities involved in the Russia involvement in our engagement in our election. I don't quite understand how you can be done with that, but not be done with the whole investigation of their attempt to affect the outcome of our election.

Cindy McCain? Can you please come collect your husband?

But you reached the conclusion that there was no reason to bring charges against Secretary Clinton. So you reached a conclusion in the case of Mr. Comey, you, uh, President Comey, uh, excuse me, case of President Trump, you have an ongoing investigation. So you got one candidate who you're done with, and another candidate that you have a long way to go. Is that correct?

Fool John McCain once, shame on him. Fool him twice ... can't get fooled again! We are beginning to for real worry, and also are feeling a little bit cruel for transcribing this in full.

You just made it clear in what you said, this is a quote "big deal" unquote. I think it's hard to reconcile in one case you reach a complete conclusion, and the other side, you have not. And you've in fact obviously there's a lot more there, as we know, as you called it, quote, a "big deal." She's one of the candidates, but in her case, you say there will be no charges. But in the case of President Trump, the investigation continues.

Meghan McCain? Have you called your dad lately?

Comey pointed out that there was no evidence Hillary's campaign colluded with Russia, but McCain was still having A Confuse:

So both President Trump and former candidate Clinton are both involved in the investigation, yet one of them you said, there's gonna be no charges, and the other one, the investigation continues. Well, I think there's a double standard there, to tell you the truth!

Lindsey Graham? Please check on your Senate BFF, as we worry he might be at risk of getting into a car with a stranger who offers him sweet delicious butterscotches.

For what it's worth, McCain has released a statement saying his questions obviously went over everyone's heads, and also he shouldn't stay up past bedtime watching action-packed baseball.

It is a nice statement! It is self-deprecating, and the questions as written make sense! And they have nooooooothing to do with the crazypants above, and hooboy poor old man. WALNUTS!