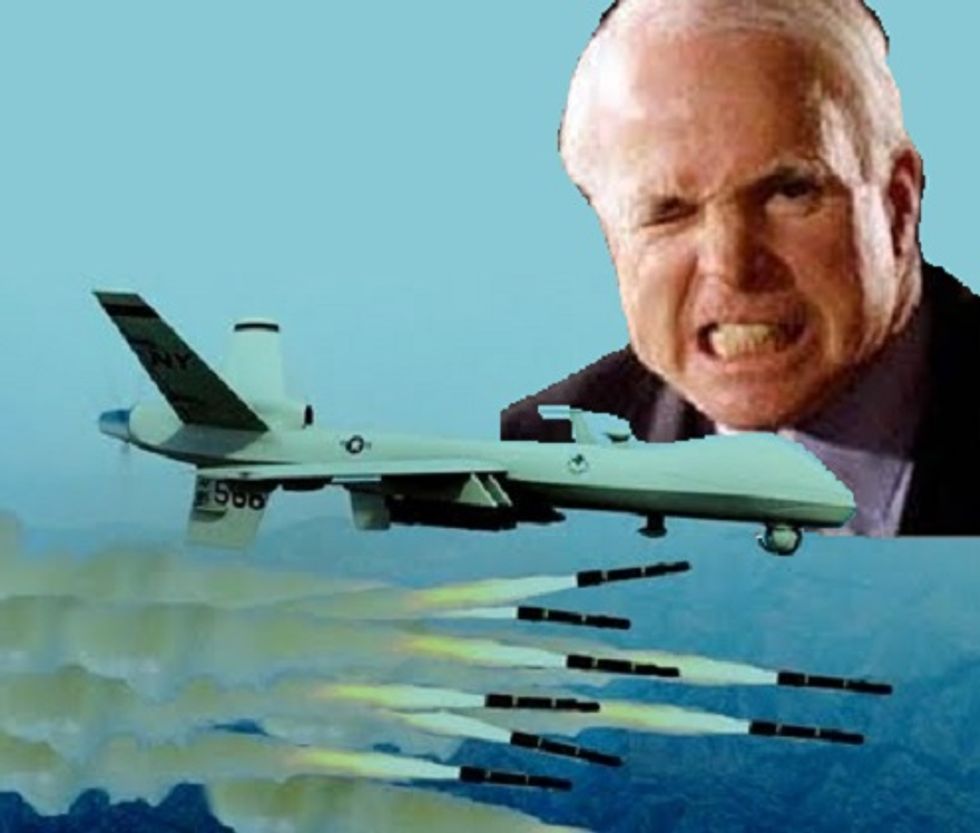 In one of those weird astronomical things that celestial mechanics throws the solar system now and then, Yr Wonkette andGhost Breitbart's House of Free-Floating Rage find themselves in a rare alignment, with both blogs asking, "Hey, John McCain, WTF dude?" Breitbart's AWR Hawkins (those are initials, but we always use our Pirate voice when we say his name) brings the head-scratching:

Senator John McCain (R-AZ) says President Obama should bomb Syria before Congress says otherwise and that he should ignore any talk of impeachment for doing so. "They're not going to impeach the president," said McCain. "They're not that crazy."

Let's back up to the story from The Hill where this comes from:

McCain said that if Obama acts before any vote in Congress, he could argue that he has acted in conformity with past administrations, including President Reagan’s invasion of Grenada in the 1980s.

“He notified everybody the next morning,” McCain noted at a Wall Street Journal breakfast roundtable.

Why, yes, that's pretty much the model for how good governing works: Do whatever the hell you want, and then let Congress know about it, just like the Founders wanted.

And just to make things weirder -- because that's his forte -- McCain invoked the beautiful harmony of the Constitution's separation of powers before suggesting that presidents have some awesome ways to avoid all that nonsense:

"There are times when the president of the United States has to act in the national interest and that clashes with my view we are a nation of laws, governed by the Constitution and the separation of powers,” he said.

“I do believe there are times, particularly prior to World War II, we have the example of Franklin Roosevelt taking actions that Congress would never have approved … Abraham Lincoln acted unilaterally in the Civil War,” he added.

And so, if it turns out that the Russian-brokered Syria deal goes south, Obama could simply make his case on teevee, then act before Congress can slow him down:

And again, no need to worry about congressional reaction, because no way is Congress going to impeach a president for acting in the national interest. They might bluff, but that's all. Like that time so long ago, last week, when McCain said "No one wants American boots on the ground" and promised -- pinkie swear -- that if such a thing happened, Barack Obama would be SO impeached.

John McCain is starting to sound a little like that old Calvin and Hobbes strip: "Dad, will you buy me a flamethrower?"

[The Hill via Breitbart.com]