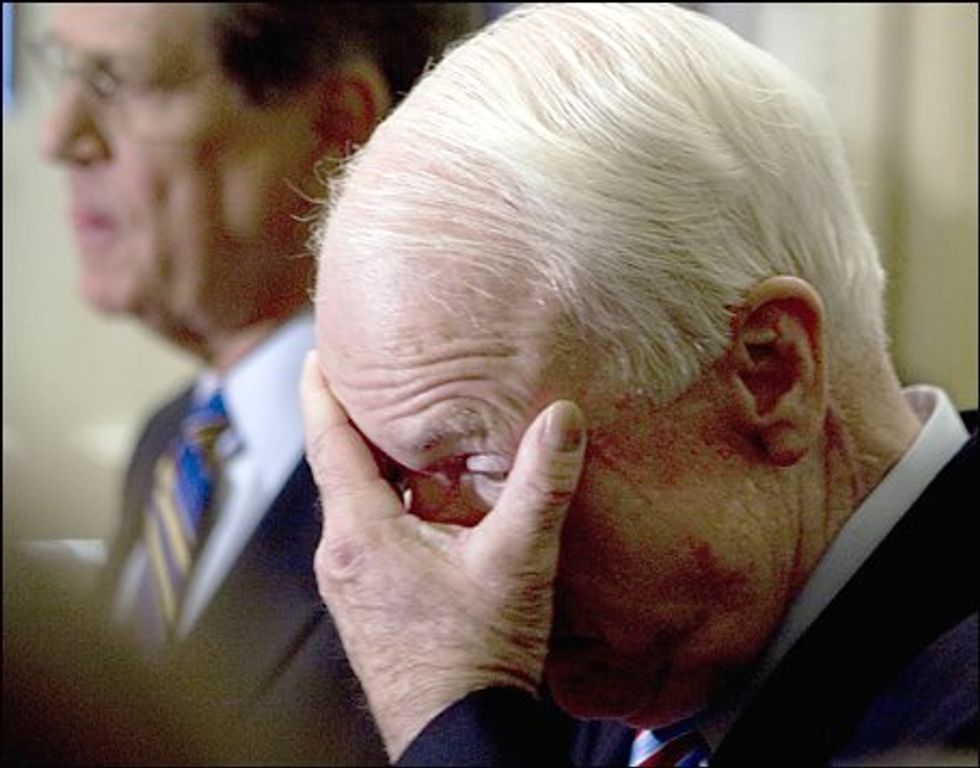 Sure, you might think the whole Republican Party has gone round the bend and off the deep end about President Obama's decision to destroy America (again!) with his unprecedented executive action on immigration. But no, that is A Illusion because a few young congressional newbies are making it look that way. So sayeth Sen. John Bitterpants McCain, always the voice of reason and rationality (unless there is a slight problem with The Economy, in which case drop everything and proceed immediately to crapping in your Depends, or unless someone somewhere isn't currently being bombed).

“It only takes a couple” of comments for an unflattering narrative to build about the Republican response, said Sen. John McCain (R-Ariz.). “That’s the trouble with having some of these new, young punks around here. They ought to listen to us old geezers.”

According to carbon dating, McCain does qualify as an old geezer. So these young'uns should definitely listen to him and stop saying crazy things that make the party of crazy sound crazy.

Like fresh-faced Rep. Michele Bachmann, who is sure that the country will drown in Democrat Messican illiteracy, THANKS OBAMA.

And new kid on the block, retiring Sen. Tom Coburn, who said we "could see instances of anarchy" and "violence." What does he know? Maybe once he's been in Washington for more than 19 years, he'll understand that is not how we have adult conversations about important policy matters.

Then there's some guy named Rep. Steve King, no idea who this pimply-faced teen is, who has warned that Obama's actions will create a "constitutional crisis" now that the president has officially rolled out the welcome mat for "families to give their daughters birth control pills and send them down a rape path all the way through Mexico." Why don't you take a seat in the back, freshman, and learn a few things from your elders, huh?

And the good lord knows the GOP doesn't need this silly lady from Alaska besmirching the party's pristine name with nonsense talk about how immigrants are mostly Muslim terrorists who will infect us with Ebola. Sure, she might be the nation's foremost expert on energy policy, according to some dude who has no idea what he's talking about, and also too Russia also too, but that doesn't mean she's been around long enough to know a thing or a other thing about immigration policy.

It really doesn't help to have kids these days like Rep. Don Young, also of Alaska, referring to illegal Muslim terrorist illegals as "wetbacks," either -- and no, McCain doesn't care if that's some newfangled term all the millennials are using on their FaceSpace nowadays.

Maybe once these children have been around for a century or two, like McCain, they'll learn how to tone down their rhetoric so we can have a grown-up national conversation about immigration policy, the way Geezer McCain would prefer. And instead of hyping up all the hyperbole, we can stick to the relevant topics -- like how the browns (probably, why not?) are sneaking across the border to set Arizona on fire, but we still need them to pick our lettuce.

That's how a grown-up non-punk with a haircut and a real job talks about immigration, kids. If you punks would sit down and shut up and listen to grandpa, you just might learn something.