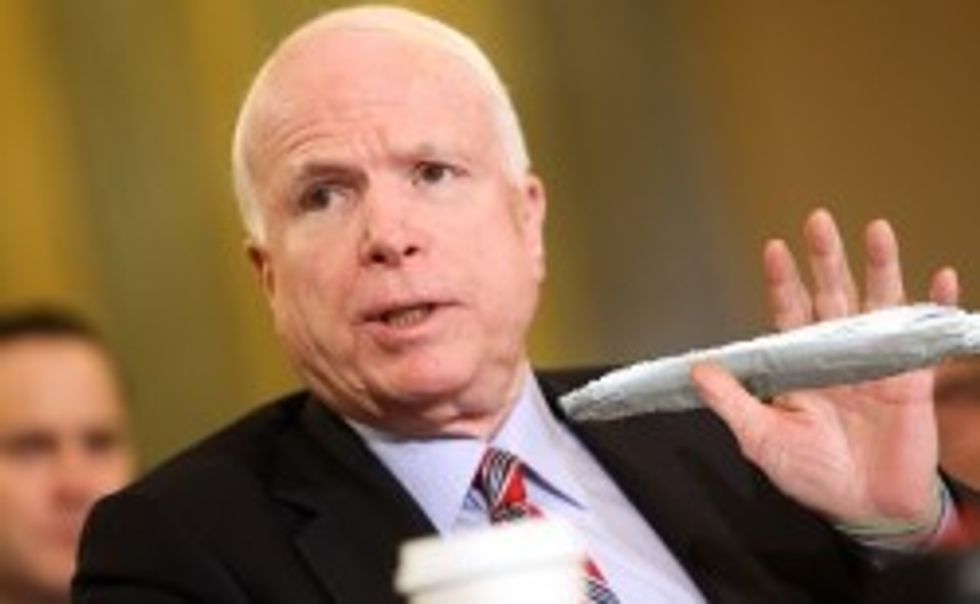 Senator John McCain isdoing that thing again, bouncing between that "senior statesman" image that he's fond of, and sliding back into the petty, crotchety grumpbag persona that he seems to relish almost as much, maybe more. Sunday, he was back to Voice of Reason mode again, telling CNN that he thinks "stand your ground" laws should be reconsidered and that he found Barack Obama's recent speech on race "very impressive." The only real question is whether McCain's periodic flashes of reasonableness occur when he's taking mood stabilizers or when he's free of chemical influence altogether.

He also said that he thought that Arizona should review and possibly repeal its version of "stand your ground," adding that he was "confident" that the Arizona legislature would reconsider the "very controversial legislation." He also said that he rejected Senator Ted Cruz's opinion that any talk of rolling back "stand your ground" laws was an attempt to subvert the second amendment.

"Isn't it time for America to come together?" McCain asked. "I'd rather have a message of coming together and discussing these issues rather than condemning.

"I respect (Cruz's) view, but I don't frankly see the connection," he added.

Doctors were unable to explain whether McCain's optimism reflects wishful thinking, a need to adjust his meds, or a wholesale disconnect from reality.

McCain also appeared to entertain the possibility that the verdict in the George Zimmerman trial highlighted actual tensions in American culture, which of course is impossible, since all other Republicans know that the only racial tensions in America are stirred up by race hustlers like Barack Obama and Al Sharpton.

McCain's remarks drew immediate criticism from conservatives online. Minority groups can be talked at, but McCain's comments indicate a dangerous willingness to listen to those people.

Having said something reasonable, Sen. McCain is doubtless headed for yet another episode of petulant rage by the end of the week; Speculation on the John McCain Emotional Futures market is expected to be brisk, and longtime McCain watchers predict the Arizona senator will next be seen kicking an adorable kitten on national TV.