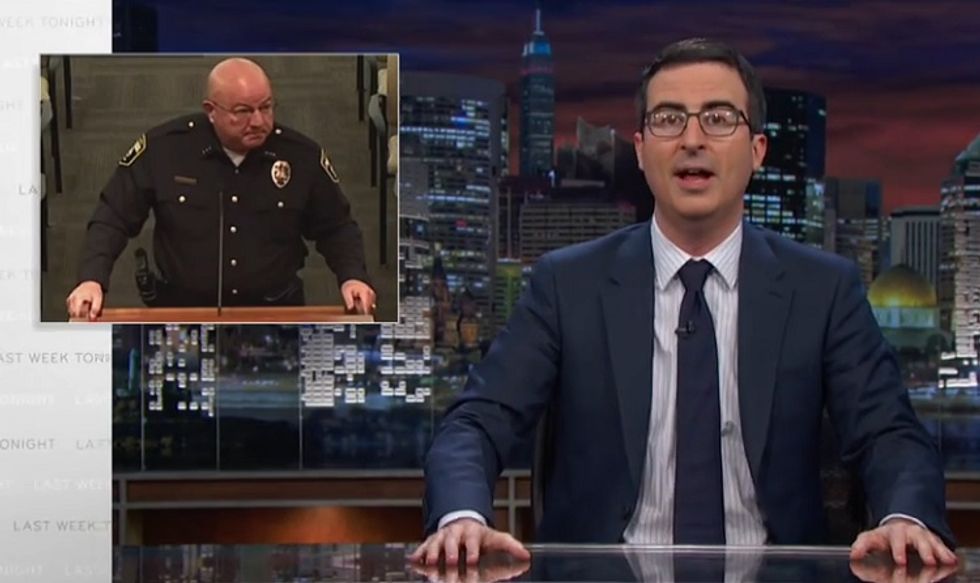 John Oliver takes on one of the more boring but insidious scandals in Our Republic today: the phenomenon of civil asset forfeiture. That's when police seize cash, vehicles, or any other property they believe was used in a crime, regardless of whether the stuff's owner is found guilty of a crime or not.

Typical scenario: A guy who was stopped while traveling from Michigan to California with $2400 in cash to cover the costs of his move and get settled in a new job. Pulled over in Nevada, he was asked if he had any cash in the car, at which point the cops decided he had to be on the way to California to buy drugs with all that filthy money, so they seized it. Oliver exclaims:

Wow! There is so much wrong there, including the fact that any policeman who genuinely believes you need to travel from Michigan to California to purchase drugs needs to be introduced to the concept of the University of Wisconsin-Madison. It's right there!

It's not just traffic stops, either. There was also a 2008 raid at the Contemporary Art Institute of Detroit's "Funk Night" event, where police seized every vehicle in the parking lot -- 44 of them -- on the pretext that the Art Institute didn't have a liquor license, and therefore all cars driven there were participating in a criminal enterprise. Owners had to pay $900 each to get the cars out of impound -- except for one poor bastard whose car was stolen from the impound lot. Not mentioned in the last Week Tonight story: the ACLU filed suit, and the raid was determined to be unconstitutional, so there's that, at least.

If the causes for asset forfeiture are flimsy and ridiculous, the "law enforcement repurposing" of those assets is similarly crazy. For instance, there's the Massachusetts police department that bought a Zamboni -- the DA's office "could not determine where this machine is located or the law-enforcement purpose it serves." Oliver acknowledges there may have been a perfectly legitimate use for it: "If you're robbing a bank and the police pull up in a Zamboni, you're going to give yourself up out of sheer curiosity."

It's jaw-dropping and enraging. Happily, with the resources of HBO on hand, they're at least able to put together a pretty good promo for a new TV show: Law & Order: Civil Asset Forfeiture Unit, starring Jeff Goldblum.

And also, here, have some outtakes with Jeff Goldblum: