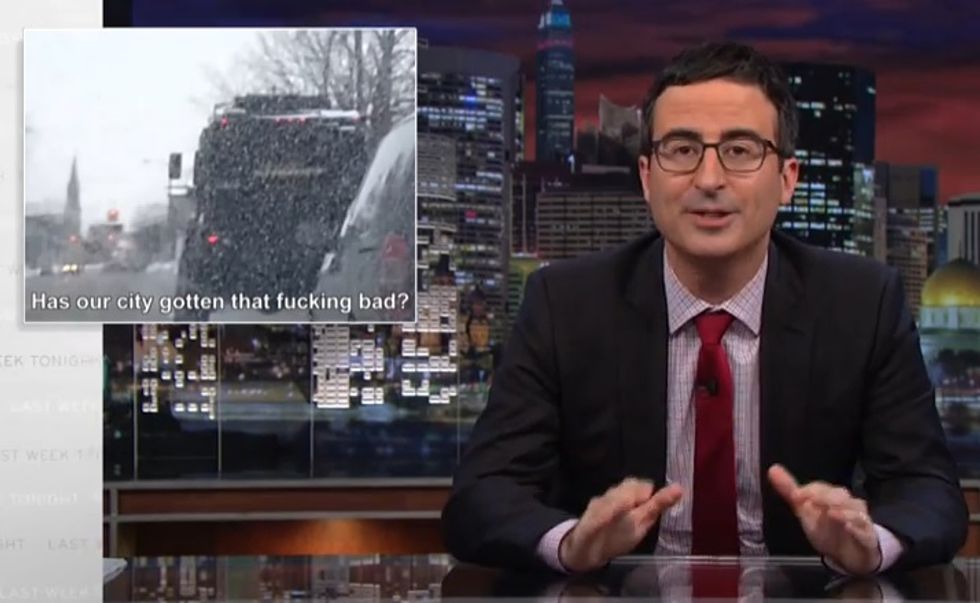 John Oliver responded to the madness in Ferguson, Missouri, by noting that the story is "depressingly familiar," and that while we still don't have any definite answers in the shooting of Michael Brown, "what is absolutely clear is that the police have handled everything since then terribly." The tone-deaf police response started with St. Louis County Police Chief John Belmar's explanation that Brown had been shot not a wholelot more than a few times with more than a couple of bullets. And then there was the identification of the officer who did the shooting, which was packaged with "a DVD extra that nobody wanted": the video of Brown allegedly robbing a convenience store, which doesn't actually have anything to do with the shooting but was excellent fodder for painting Brown as a thug who needed to die.

Just to add to the cluelessness, there's the mayor of Ferguson on national TV, explaining that Ferguson has never had any racial tensions, ever, to which Oliver astutely replies, "As a general rule, no one should ever be allowed to say 'There is no history of racial tension here,' because that sentence has never been true anywhere on earth." Particularly not in Ferguson, where in 2009, police beat Henry Davis, a black man whom they'd wrongly arrested after mistaking him for someone else with the same name -- and then charging him with "property damage" for bleeding on their uniforms.

And then it's on to the hyper-militarized police -- not just in Ferguson, but everywhere -- and the observation that maybe, just maybe, police need to realize that they're not really soldiers, no matter how much they love their toys: