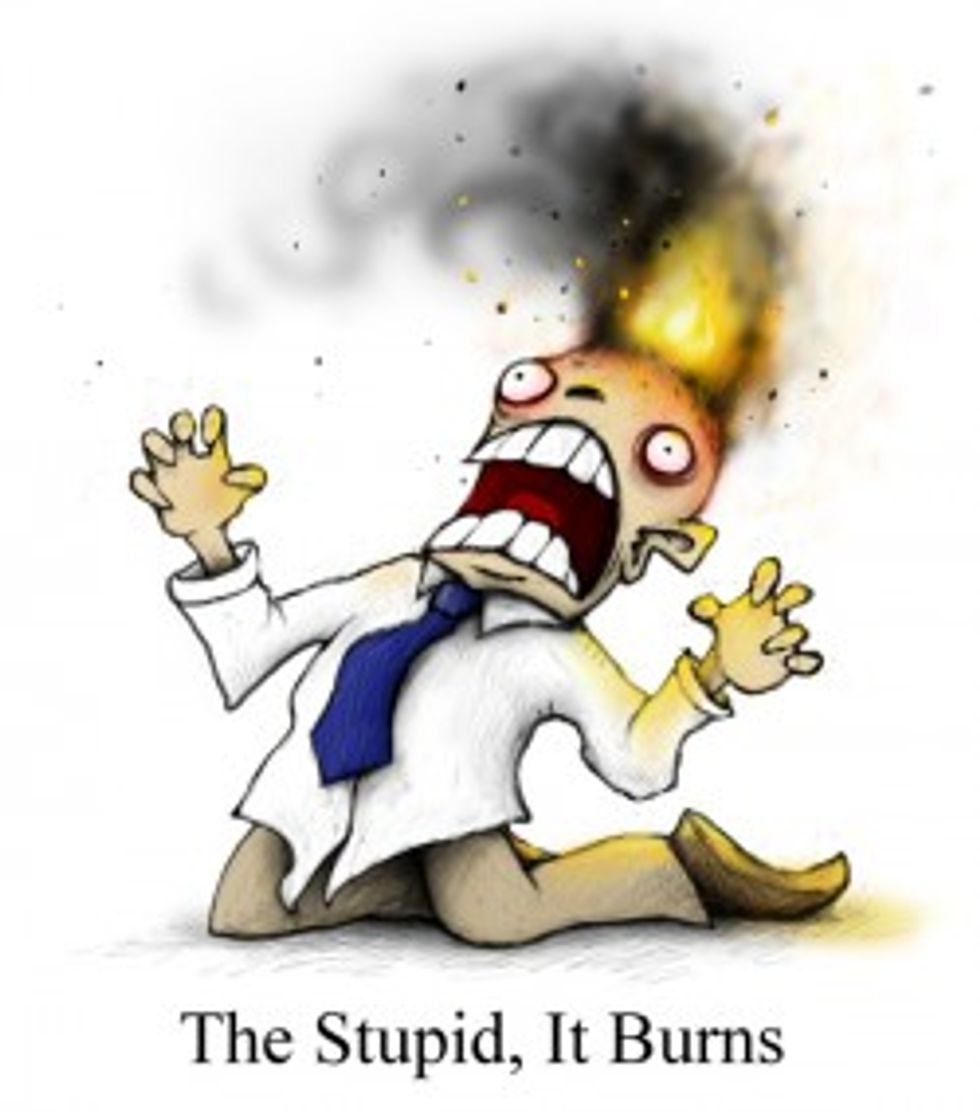 Senator Jon Kyl (R-Arkham Asylum) had a very insightful analysis of theU.S. Embassy's statement condemning religious bigotry. In a stunning combination of cluelessness, partisanship, and a basic misunderstanding of analogy, Kyl told a group of reporters

It's like the judge telling the woman who got raped, 'You asked for it because of the way you dressed.' OK? That's the same thing. 'Well America, you should be the ones to apologize, you should have known this would happen, you should have done — what I don't know — but it's your fault that it happened.' You know, for a member of our State Department to put out a statement like that, it had to be cleared by somebody. They don't just do that in the spur of the moment.

Leaving aside the trivial detail that the Embassy's statement said nothing about America being at fault or needing to apologize, Kyl's odious comparison achieved epic levels of assholishness on several counts. Un: You might think that, given the late unpleasantness over Todd Akin, which threatened to derail the GOP convention, a Senator might be a tad careful when it comes to throwing around comments regarding rape. Deux: You might also think that, given his own high-profile non-factual statement about abortion being "well over 90 percent of what Planned Parenthood does," Kyl might think a little bit before opening his stupid hack mouth. Trois: Jon Kyl is from the Great State of Arizona, where a judge prompted widespread condemnation a few days ago for actually telling a victim of sexual assault that she asked for it.

In that shining example of jurisprudence, Coconino County Judge Jacqueline Hatch found it advisable to use the sentencing hearing for the perpetrator as a forum to lecture his victim on how she invited her own sexual assault by existing in public after dark.

Last summer, off-duty state police officer Robb Evans, already drunk, entered a Flagstaff bar, approached the victim ("a friend of a friend") from behind, put his hand up her skirt, and groped her genitals. The jury at his trial convicted him of felony sexual abuse and he was fired by the Arizona Department of Public Safety after an internal investigation. Instead of the six months to 2 1/2 years in prison that the conviction could have brought, Judge Hatch sentenced Evans to two years of probation. He will also not have to register as a sex offender. Clearly, there must have been some pretty mitigating circumstances!

Judge Hatch, appointed to the bench by feminist icon Gov. Jan Brewer, told the victim that wantonly going to bars while in possession of a vagina is a recipe for trouble:

Bad things can happen in bars, Hatch told the victim, adding that other people might be more intoxicated than she was.

"If you wouldn't have been there that night, none of this would have happened to you," Hatch said.

Hatch told the victim and the defendant that no one would be happy with the sentence she gave, but that finding an appropriate sentence was her duty.

Hatch said that the victim was not to blame in the case, but that all women must be vigilant against becoming victims.

"When you blame others, you give up your power to change," Hatch said that her mother used to say.

Also, Judge Hatch has apologized to the victim. So everything is OK now, there is no war on women.

So, getting back to Sen. Kyl: You can see how the U.S. Embassy saying that maybe religious bigotry is a bad idea is EXACTLY like blaming a rape victim. Which a judge in his state literally did. This week. One might think that Kyl would be somewhat aware of all that. Actually, this is Senator Jon Kyl, so any expectation that he would be "aware" of anything is maybe a bit optimistic.