Jon Stewart Can't Believe How Obamacare Got Blown, Right In The Ear (Video) 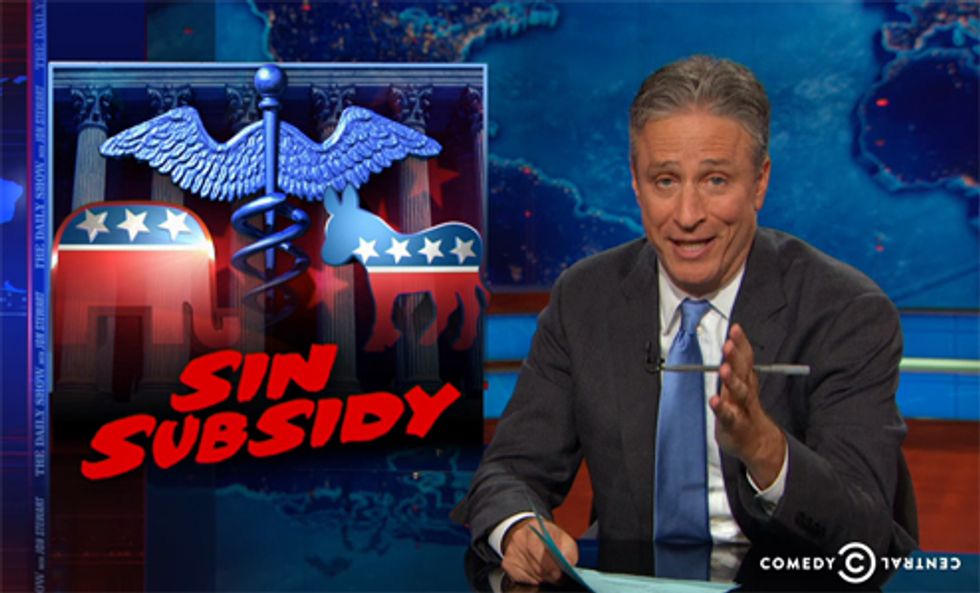 TheDC Circuit Court's ruling on the ACA Tuesday was, according to everyone on cable, "a major blow to Obamacare," as Jon Stewart dutifully notes with clips of a slew of cable news people saying it was a huge, catastrophic, major deadly blow. As you recall, the appeals court insisted that a bit of sloppiness in drafting be interpreted as narrowly as possible -- since the law says subsidies will go to those who buy insurance “through an exchange established by the state,” two Republican appointees held that there's no way the law actually allows subsidies for those who bought insurance on the federal exchange. Says Stewart,

I’m just happy both judges got to work that morning, assuming that once they hit stop signs, their days ends. Until the law expressly provides a "go" sign, we can in no way ascertain the intent of the framers of the sign.

So, asks Stewart, now that the ACA has run up against "two judges more literal than Amelia Bedelia," what happens next? Mostly a bunch of cable talking heads proclaiming that the law is irreversibly tangled, and doomed to chaos and madness, DOOMED, they say. "Obamacare is made of people!" But then of course, a second appeals court ruled in a separate case that policies bought on the federal exchange still get subsidies, because that's pretty obviously Congress's intent. Oh. Well, maybe put away the zombie invasion plans, then, since America might not be blown after all.

It's a complete mystery, really -- how on earth did the two Republican appointees decide the law had to be read as literally and as painfully as possible, while four Democratic appointees said nah, mang, it's good? Is there any hope at all for fixing this incredible chaos? Like maybe adding one sentence clarifying that the subsidies go to policies on the federal exchange, too? Gosh, maybe Congress could quickly and easily do that? Oh...