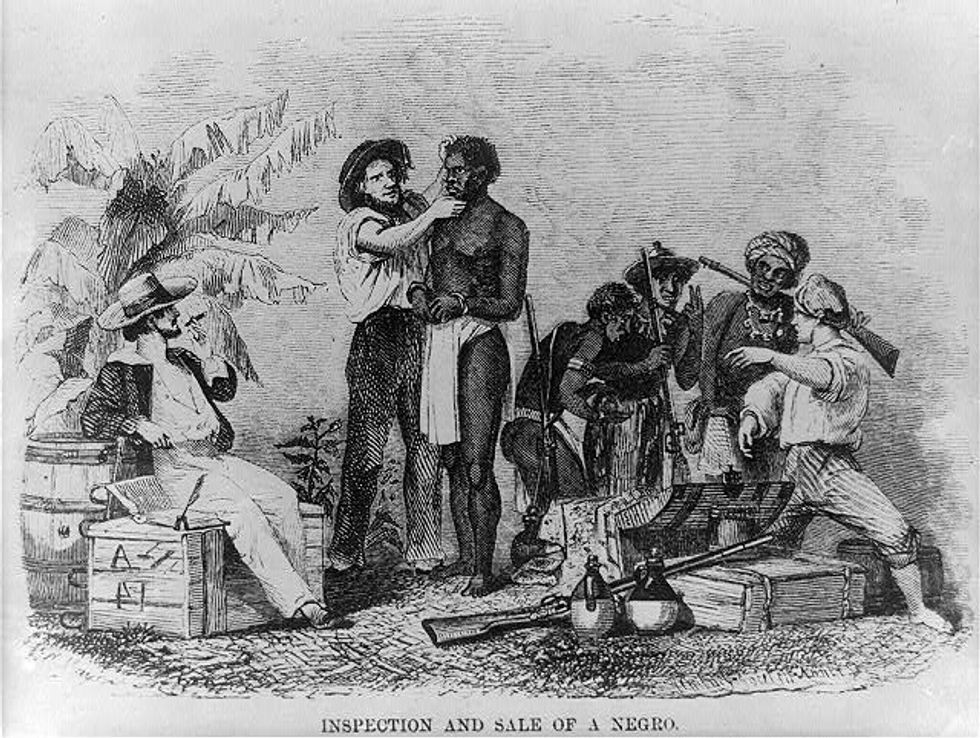 Joseph Farah, the editor of Serious News Outlet WorldNet Daily, has aSerious Question he wishes you to consider: “Are we better off now than we were in 1776?” And while the real answer involves glancing at the illustration above, remembering that women couldn't vote until 1919, rolling our eyes, and saying "Duh, Joe," we are pretty sure that we would not get paid for this blog post if we didn't engage Farah's dumb column in further detail.

So sure, for the sake of argument, let's grant that Farah might grudgingly extend to the ladies and the dusky-hued savages the same level of freedom that white men had in 1776, and further assume that he doesn't literally want us to return to 18th-century levels of medicine and technology, either -- which are pretty big concessions, considering that Farah doesn't mention any of these trivial details of the material realities of life in colonial America, which he insists "wasn’t all that bad."

Let's even assume that we could somehow shoehorn most of the good stuff about today's material reality into the political and economic norms of 1776 -- or really, 1791, since Farah immediately shifts the goalposts to a discussion of "constitutionally protected rights we secured through the War of Independence," as if the Bill of Rights had magically appeared when Jesus handed the Constitution to George Washington. Which is to say, Farah is engaging in historical & cultural fantasy from the get-go, but sure, we'll play along.

Farah starts with our very favorite amendment, the First:

The so-called “free press” has become as abominable as the state-controlled media of the 18th century – maybe worse. As I write in my book, Stop the Presses! the very concept of the God-given right to a free press was first articulated by America’s Founding Fathers. They saw the press as a vital check and balance against government tyranny.

First, the nitpicks: We'll happily grant that the press in Colonial America was subject to licensure and censorship, though we'd note that free-press champion John Peter Zenger won his landmark case well before revolution was even a going proposition...and that the Alien and Sedition Acts cropped up after the establishment of the Constitution. We're more annoyed by Farah's idiotic suggestion that free speech sprang full-grown from the foreheads of the Founders, as if John Milton hadn't written Areopagitica nearly 150 years earlier. But Milton wasn't American, so forget him.

a corporate media, regulated in so many ways by the state, [has] become, in essence, a tool of the furtherance of state power. Rather than serving as a “watchdog” against corruption, fraud, waste and abuse by government and other powerful institutions, the statist media became a “lapdog” of those interests.

What's hilarious here is that he gets so close to identifying the real problem -- the power and influence of corporate money -- and then turns around and suggests that "government" is the problem, when it's largely another wholly-owned subsidiary of our, you know, corporate overlords. Who need to have more "free speech" in the form of making campaign donations. Mr. Farah's own organization, on the other hand, has suggested that journalists who say nice things about the tyrant Barack Obama should be arrested and executed for treason.

But on to another chunk of the First Amendment, freedom of religion:

Barack Obama often refers to it as “freedom of worship.” But that’s a whole different animal. Yes, it’s true, you can worship virtually any way you want in America in the assembly of your choice. But just try taking your faith into the public square. Religion in America today, especially in the Judeo-Christian, biblical form that inspired the concept of self-government, the rights of the individual and the rule of law, is on the run. The Ten Commandments are forbidden in any institution controlled by government. Prayer is forbidden in public schools by the order of the U.S. Supreme Court. The Bible, which was the foundation of early education in the 18th century, is forbidden from government schools.

Poor oppressed Christianists! If only we could have the good old days, when Americans were free to be almost any kind of Christian they wanted to be, as long as they weren't Quakers or Unitarians or some other weird cult. If only we were allowed to endlessly mention God in our political discourse, which never happens anymore because of all the oppression.

Then of course, there's the second amendment, which is under such severe threat that nobody is even allowed to pack a few hundred people with loaded AR-15s into a state capitol building anymore.

Strangely enough, we actually agree with Farah that the Fourth and Fifth Amendments are being eroded by the expansion of law enforcement and Executive power, though we think that has a lot more to do with the War On Some Drugs and post-9/11 paranoia over terrorism than anything else. Farah's chief examples of such tyranny? The IRS, the EPA, and the ATF. Oh, and he at least pays lip service to the distrurbing idea that "tyrants in Washington claim the right to assassinate or indefinitely detain American citizens without due process," a concern which is maybe undercut just a little bit by his declaration, during the Bush administration, that the Supreme Court had pulled off a "coup d'etat" by deciding that prisoners at Guantanamo were entitled to due process.

But anyway, yes, we are all less free than we were in 1776. Or 1791. We would urge Mr. Farah (who is threatening to write a book on this theme) that he should go have a barber apply some leeches to him, since his humours are clearly out of balance.

Check out Wonkette on Facebook and Twitter and even on Tumblr. And if you wifh to haue Tweetf Of Liberty fent to your fmarte-Phonne, you can follow Ye Olde Doktor Zoom on Twitter, alfo, too.