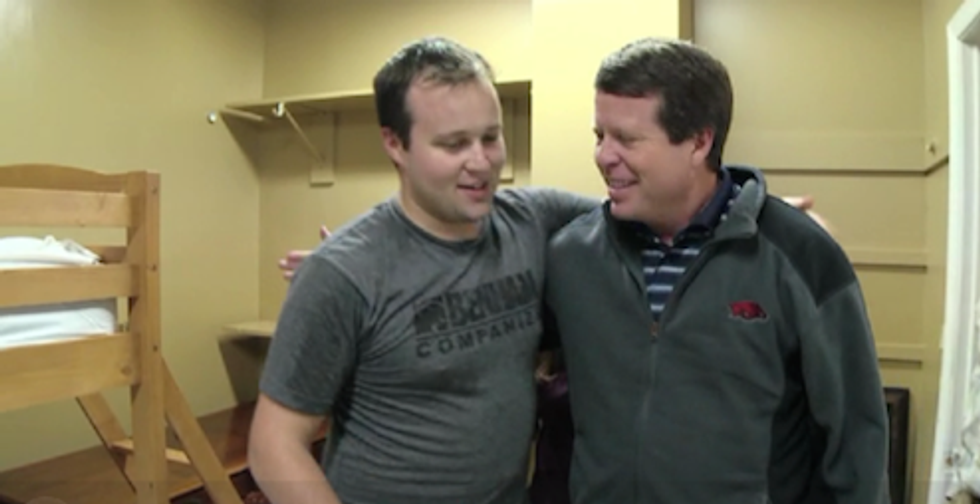 Well that was fast! Late Wednesday, we learned that "family values" fuckstick Josh Duggar was one of the eleventy-million dudes (they are almost all dudes) who had accounts on the Ashley Madison website, we guess for the purposes of getting his dick wet in ladycaves what do not belong to his wife. This is very much a sin according to Leviticus 18, which you'd think he would have read at least once, considering how he and his family have been fighting their own low-rent version of the Crusades against LGBT people for all these years. Guess the only part of that passage that's really important is verse 22, affectionately known by devout believers as "the one about buttsex."

Anyway, he's made a statement of apology, let's tear it apart and call it not good enough:

I have been the biggest hypocrite ever. While espousing faith and family values, I have secretly over the last several years been viewing pornography on the internet and this became a secret addiction and I became unfaithful to my wife.

I am so ashamed of the double life that I have been living and am grieved for the hurt, pain and disgrace my sin has caused my wife and family, and most of all Jesus and all those who profess faith in Him.

I brought hurt and a reproach to my family, close friends and the fans of our show with my actions that happened when I was 14-15 years old, and now I have re-broken their trust.

The last few years, while publicly stating I was fighting against immorality in our country, I was hiding my own personal failings.

In other words, first the demons made him do the Devil Diddles to his sisters, and then while he was saying sorry to Jesus for that, a whole new set of demons led him into a whole new kind of temptation, this time involving grown-ups for a fucking change. Meanwhile, he was working for a hate group that exists to deny rights to gay people, telling everyone that the gay sex those people have with their gay spouses is somehow not as holy and good as what he did to his sisters or the ladies from Ashley Madison.

But what does the rest of the Duggar clan have to say about this? Meh, not much. There was probably a fight at the homestead last night with the missus -- "you said you had only been with your sisters!" -- and Ma and Pa Duggar, they say their "hearts were broken" when they found out, for the millionth time, that their firstborn son is a pervy bag of smegma crust.

"Twelve years ago, as a young teenager, I acted inexcusably for which I am extremely sorry and deeply regret. I hurt others, including my family and close friends," Josh, 27, tells PEOPLE in a statement. "I confessed this to my parents who took several steps to help me address the situation. We spoke with the authorities where I confessed my wrongdoing, and my parents arranged for me and those affected by my actions to receive counseling. I understood that if I continued down this wrong road that I would end up ruining my life."

Awwww, and then he got the counseling he needed and he never messed with the wrong girl parts ever again, except for all the times he did, in Jesus' name, Amen.