Journey To The Center Of The Derp: Ted Nugent Tries To Mash All Wingnut Buttons At Once 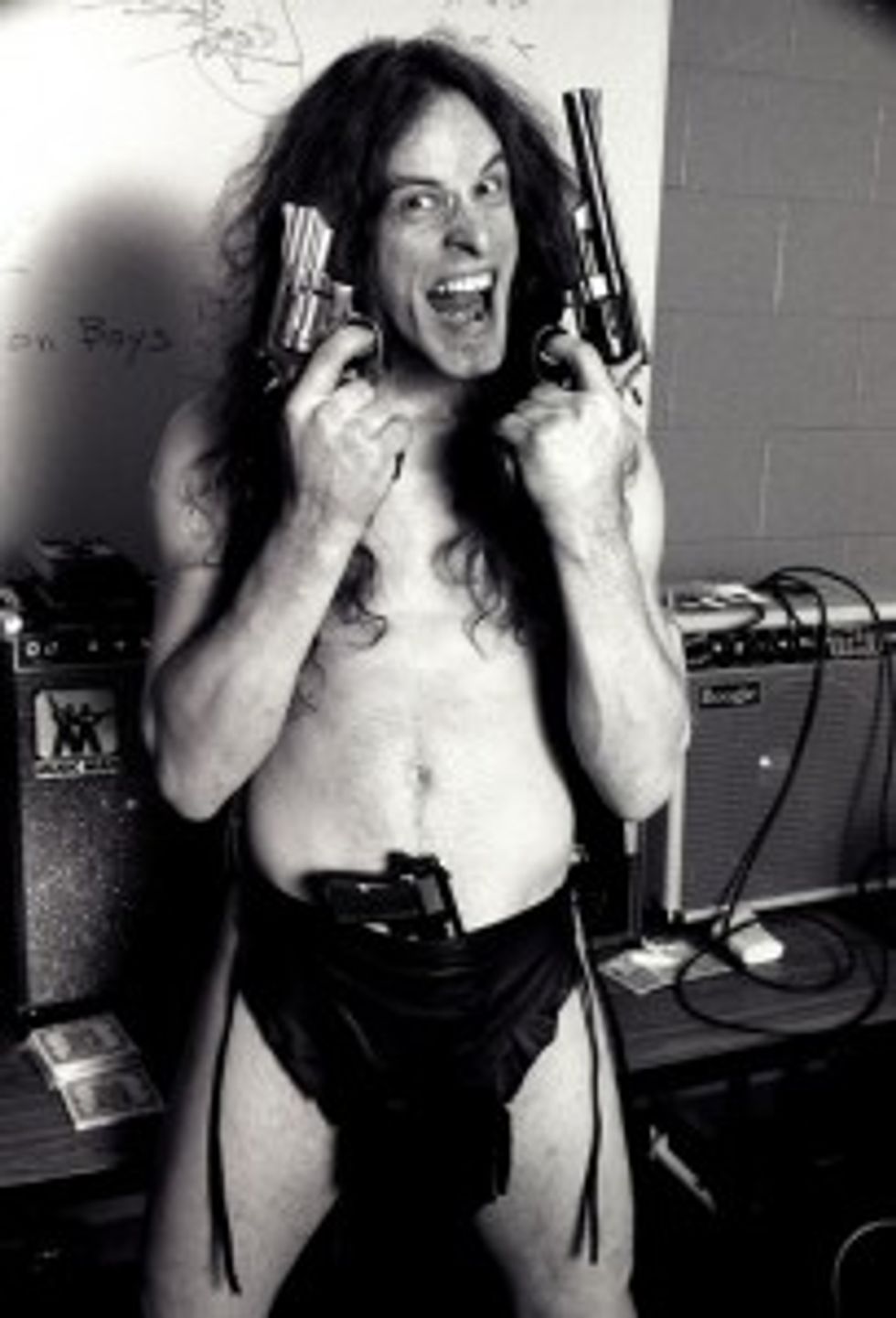 Ted Nugent. Yes Ted Nugent and do not start yelling lovely commenters, because maybe he says this crazy shit all of the time, but this time he has joined up for an interview with a radio talking guy who is just as wingnutted and wrong as him, and they hit every single rile-up-a-redneck-talking point there is for all wingnuttery forever and maybe NOW they will shut up? (They will not shut up.) But still, this is a good link to keep for the next time there's a chance to play Wingnut Bingo.

Santilli, who has promoted conspiracy theories relating to the December 14 massacre at Sandy Hook Elementary School that left 20 children and six educators dead, does little to hide the fact that he is a conspiracy theorist. The recorded introduction to his radio show says that it is broadcast from "FEMA region nine" and that the show's purpose is to counter "the New World Order, the global elite and their eugenics agenda."

All right! This sounds like this should be fantastic! Get ready, as Nugent brings on the perfect storm of crazy, a whirling all-encompassing final theory of everything - he's got your Godwin, Sandy Hook, NRA, fucktard radio host, sexism, xenophobia and fat-shaming!

My parents taught me that my gift of life is embodied in the sacred temple. So no drugs, no alcohol, no tobacco and no fat chicks. Stuff will kill you, Pete, I'm telling you, it's deadly. But I have been known to chew on a Cuban, that's a cigar. I wouldn't chew on a Cuban, they haven't figured out personal hygiene yet. But I do chew on a cigar once in a while when I shoot my machine gun around the camp fire.

Well hell yeah, Nuge, chew on that cigar - and no one tell this super smart guy about the oral cancer, okay? Also, did he just say his parents told him "no fat chicks"? That might explain some things about Mr. Poopy-Pants-Draft-Dodger for reals.

Oh and speaking of Viet-Nam, he's got some pot-kettle criticizing to do

The President of the United States Barack Hussein Obama went to the Vietnam Memorial Wall. He did his smoke and mirrors scam. He pretended to show respect and honor, 58,000 American warriors who died fighting communism. And then he hired, appointed and associates with communists.

Does anyone know who these "Communists" might be? They are doing a terrible job of spreading their message if it is only being received by the ham radio receivers the aliens implanted in Ted Nugent's molars.

If you can't see through the dishonesty and the scamming of this president with that scenario fresh in your mind, then that's literally like, I guess that would be like, I don't know, a German in 1938 pretending to respect the Jews and then going home and putting on his brown shirt and forcing his neighbors onto a train to be burned to death.

During a commercial break, Santilli continued to broadcast his conversation with Nugent. In the recording, Nugent can be heard saying of filmmaker Michael Moore, "the man has no soul" and added that if he would have been there when Moore interviewed then-NRA president Charlton Heston for his Bowling For Columbine documentary that he would have "socked [Moore] in the throat."

Charlton Heston's hands have been cold and dead long enough that we should not have to hear about them any more, no? And whatever happened to this guy going to jail or being dead or something this year?

Reacting to Santilli's claim that the government is arming Al Qaeda in Syria, Nugent claimed that "the devil got [Obama] elected" and that the president is "pure evil."

Ahhhh, so Mormon God is weaker than Black Devil? NOW we have finally learned something!

The Nuge is like the Tasmanian Devil of stupid-crazy, a whirling vortex of dumb-assery, cause ya know, thats what it comes down to - if the Nuge can't have a clip that holds 20 rounds, that just proves it, Commie Fascist Obama and FEMA camps and from my cold dead hands! To your second amendment bunkers, freedom lovers, don't forget to grab some grade-school hostages!