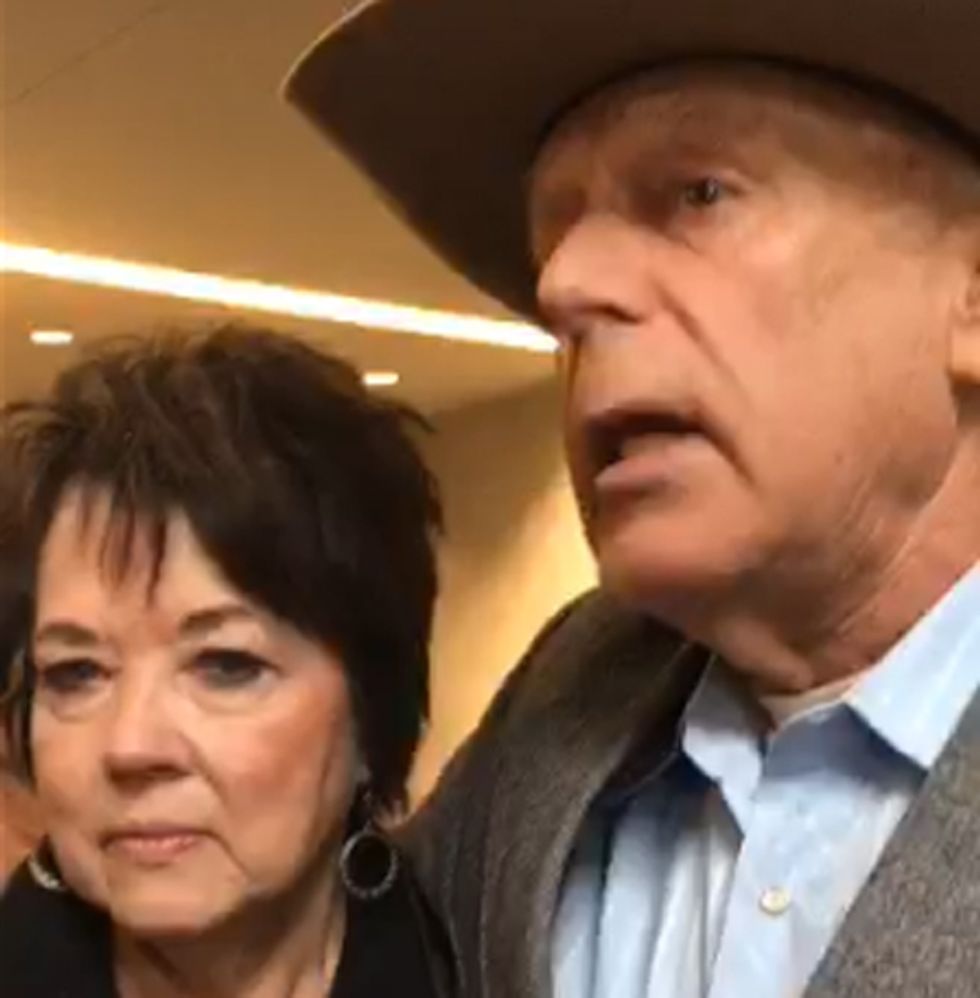 Virtually all the major figures in the 2014 armed standoff between federal agents and supporters of welfare rancher Cliven Bundy have now escaped any punishment. US District Court Judge Gloria Navarro today dismissed all charges against Cliven Bundy, his idiot sons Ammon and Ryan, and Montana militia thug Ryan Payne, because federal prosecutors had so badly bungled their case that the defendants could not get a fair trial. The case was dismissed "with prejudice," meaning the four can't be tried again on the same charges, so the government will have to wait until the next time these morons decide to take up arms against the government. We'll assume the Gang that Couldn't Think Straight will go home and rest up a few weeks before finding some bit of federal land to take over with the help of a bunch of fellow armed loons, but who knows? They may see a rest stop along the freeway and decide to liberate it.

Clearly the federal prosecutors need a refresher course at the Derek Zoolander School For Kids Who Can't Litigate Good.

Navarro, who had previously declared a mistrial in December, said in today's hearing that the federal prosecutors had willfully violated the defendants' due process rights by failing to turn over potentially useful information to the defense. Navarro said, "The court finds that the universal sense of justice has been violated," because even anti-government jerks with bizarre theories about the Constitution still have rights.

Following his release in Las Vegas, Cliven Bundy had a few words for reporters, as captured by the Oregonian's Maxine Bernstein:

After some weird rambling about the wonders of beef, which is a God-Blessed natural commodity that he'll be having for dinner tonight, Cliven Bundy suggested Judge Navarro had a secret motive for shutting the trial down when she did: If she had let it go on, his defense would have proven that the feds and Clark County Sheriff Joe Lombardo -- the highest real constitutional authority that Bundy's weirdass belief system recognizes -- were thoroughly corrupt. Bundy went on to vow that if the Bureau of Land Management tries to impound his cattle again because of the over $1 million in back grazing fees he owes, then all sorts of sovereign citizen magic words will happen, plus guns if need be:

Bundy also insisted that he'd only ever grazed his cattle on land belonging to Clark County, Nevada, because in his very special copy of the Constitution, there is simply no such thing as BLM land, because the federal government isn't allowed to own land (a position no federal court has ever agreed with, which just proves the courts are disobeying the Constitution, too). He insisted he never had a "contract" with the federal government, and therefore the court that had just released him "has no jurisdiction over this matter."

As for what's next for Cliven Bundy, there's no telling, but he thinks he may have to be part of the great movement to "go after" the "aiders and abettors" who are guilty of taking freedom away from all Americans. Among those who may have to face the people's justice are the Clark County Sheriff, county commission, and the governor of Nevada, too:

Good old Sovereign Citizen flummery there. And now that the feds have fucked up the prosecution, the Bundys and their heavily armed fans certainly aren't likely to start acting like they're untouchable, oh heavens no.

Might be a good week for BLM employees to drive their private cars to work, or just take that leave they have built up. The loonies will be in a celebratory mood.