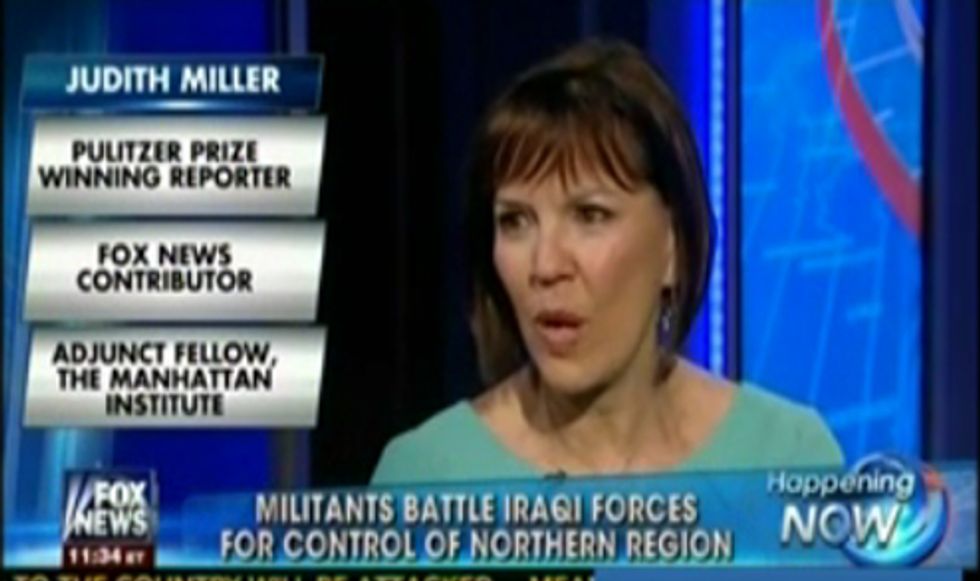 Since they're getting the old Iraq War band together for a Greatest Misses tour, it only stands to reason that we'd hear from the group's publicist, Judith Miller. On Fox News Friday, Miller said that it is just SO UNFAIR for anyone to doubt the counsel of the people who were so spectacularly wrong on Iraq the first time around. After all, they probably have a lot that they can contribute, considering their expertise in being dead wrong. Maybe they'll be right this time. It could happen!

Jon Scott: There has been Iraq fatigue among the public in this country for a long time. What about the media?

Judith Miller: Not the media. Not so, because the media still loves to beat up on who was responsible for the Iraq War, and who is to blame for the current controversy, the current crisis, and that is not helpful, Jon. What we should be doing, what the media should be doing, is encouraging everyone who has a view of what to do now in Iraq to come forward and to discuss it rationally. But they're doing the opposite. They're trying to shut down people like Dick Cheney, Liz Cheney, all of the, quote, "neo-conservatives," who brought us this war. It's not helpful.

You know what would be helpful? Just shutting up and listening to people who deliberately pushed fake evidence for WMDs, and who used Judith Miller's reporting of their own unattributed leaks as proof that Saddam Hussein was going to blow us all to pieces if we didn't get into an unnecessary war. That would be helpful to Judith Miller, it really would. After all, did you catch her résumé in that Fox clip?

In a world where the Obama Administration is actually consulting with Ahmed Chalabi, Miller's discredited source for some of her crap reporting, maybe Miller hopes she can get a job as Iraq's new Minister of Information.

Follow Doktor Zoom on Twitter. Sure he's a lousy typiost. But the Supreme Court should hire him as a transcriptionist anyway.