Justice Department Gets All Nixony Up In AP 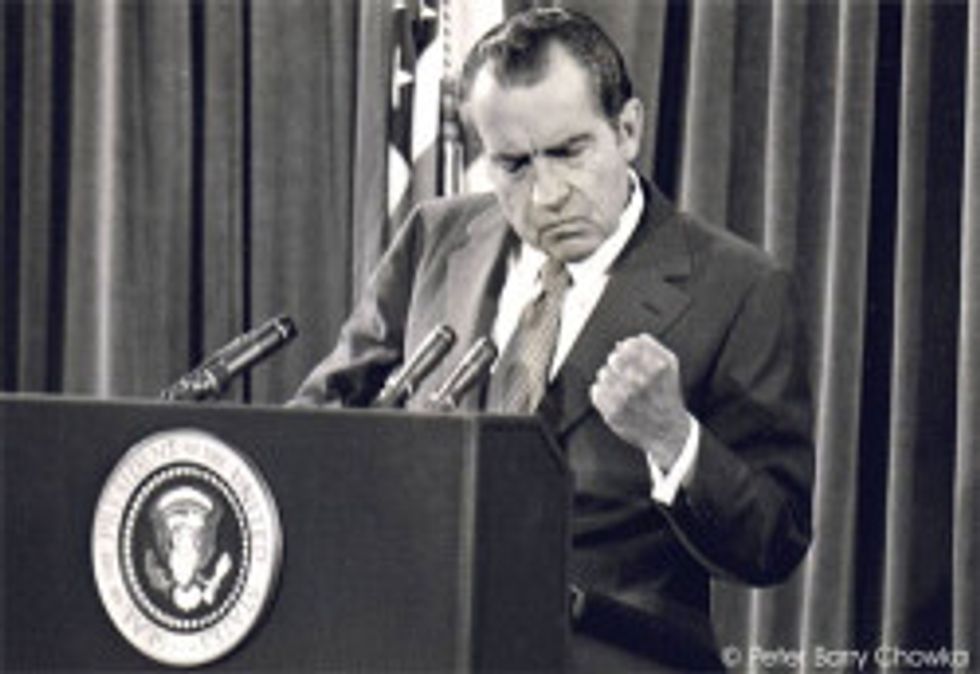 The Associated Pressreports that the Justice Department "secretly obtained two months of telephone records" of its reporters and editors in what appears to be an attempt to discover the identity of a leaker. Not to stop a terrorist or save a hostage or rescue adorable puppies from the Grinch, but to figure out who gave the AP information that made its way into a 2012 news story. For crying out loud, John Boehner's spokesman said today, "The First Amendment is first for a reason. If the Obama Administration is going after reporters’ phone records, they better have a damned good explanation.”

The revelation led Kid Zoom to say "Damn, there's something I agree with John Boehner about instead of Obama?" Shame on you, Mr. President! We have a really hard time worshipping the water you walk on when you pull shit like this.

The records obtained by the Justice Department listed outgoing calls for the work and personal phone numbers of individual reporters, for general AP office numbers in New York, Washington and Hartford, Conn., and for the main number for the AP in the House of Representatives press gallery, according to attorneys for the AP. It was not clear if the records also included incoming calls or the duration of the calls.

In all, the government seized the records for more than 20 separate telephone lines assigned to AP and its journalists in April and May of 2012. The exact number of journalists who used the phone lines during that period is unknown, but more than 100 journalists work in the offices where phone records were targeted, on a wide array of stories about government and other matters.

While the DOJ won't comment on why it sought the records, the U.S. Attorney in Washington, Ronald Machen, Jr. has been investigating possible leaks of classified information that was included in a May 7, 2012, AP story about a CIA operation that foiled a terrorist plot to bomb a US-bound airliner. Since that plot was, you know, foiled, it's pretty clear that the investigation of reporters' phone records was about finding the leaker, not national security.

The ACLU said that the use of subpoenas to obtain an excessively wide range of records "has a chilling effect both on journalists and whistleblowers," and not the good kind that makes your nipples hard, but the bad kind that makes getting at the truth hard.

Following required procedure, the Justice Department did at least notify the AP in a letter last Friday that the records had been investigated.

The records were presumably obtained from phone companies earlier this year although the government letter did not explain that. None of the information provided by the government to the AP suggested the actual phone conversations were monitored.

...News organizations normally are notified in advance that the government wants phone records and then they enter into negotiations over the desired information. In this case, however, the government, in its letter to the AP, cited an exemption to those rules that holds that prior notification can be waived if such notice, in the exemption's wording, might "pose a substantial threat to the integrity of the investigation."

So, hey, everything's all nice and legal. Screw that. This aggression will not stand, man.

The Obama administration has too much of a hard-on for secrecy, and Eric Holder has to go.