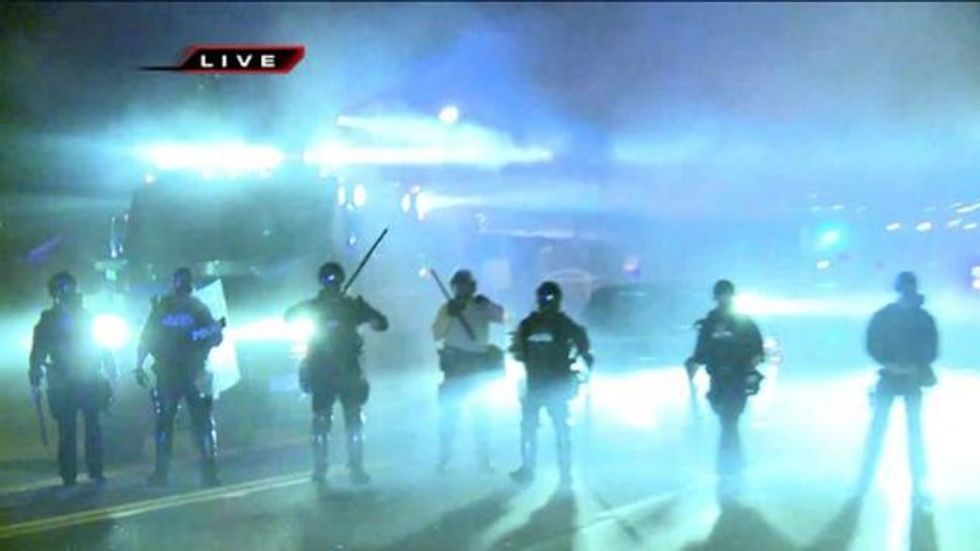 A draft Justice Department report on the police response to demonstrations in Ferguson, Missouri, last summer finds -- and we hope you're sitting down here -- that the heavily armed police were heavy-handed in their tactics, poorly coordinated, and tended to make tensions between police and protesters worse. Who'd have guessed?

The report describes a chaotic scene in which the police violated people’s constitutional rights and it was often unclear who was in charge and what the orders were.

Do tell! We seem to recall a fair bit of chaos ourselves, but it's good to know we didn't just hallucinate all that, like the Ferguson police chief who dreamed up a bunch of journalists clamoring for the release of videotape of Michael Brown stealing cigarillos.

This is the third DOJ report on events in Ferguson, and was prepared by the department's community policing branch as a means of helping other police departments "improve their policies and tactics." The report faulted the police response for going just a tad overboard, as detailed by the New York Times:

Snipers trained their rifles on protesters. Officers patrolled city streets in an armored truck that was built with combat in mind. Some officers used tear gas and police dogs to control crowds. Others pointed assault rifles at civilians. Much of the equipment was paid for with federal counterterrorism grants, which have similarly outfitted police departments nationwide since the terrorist attacks of Sept. 11, 2001.

Again and again, the equipment was misused, the Justice Department concluded: Tear gas was fired inappropriately, an armored vehicle was deployed in situations that did not warrant it and snipers should not have been used.

The report found that while use of military equipment was "warranted at times during the Ferguson incident because of threats to public safety," the police escalation from zero to full Apocalypse Now mode actually made things worse, or in the report's more careful language, "the highly elevated initial response of tactical units limited options for a measured, strategic approach." Especially during daytime, when the streets were calm and protestors were simply marching, bringing out the tactical equipment “was not justified and served to escalate rather than de-escalate the overall situation.”

Excerpts from the report in the St. Louis Post-Dispatch also said that the situation was made worse early on by the Ferguson Police Department's refusal to communicate even the most basic facts about Brown's shooting for nearly a week after the incident:

“Had law enforcement released information on the officer-involved shooting in a timely manner and continued the information flow as it became available, community distrust and media skepticism would most likely have been lessened,” according to the document.

Yes indeed. Remember when the St. Louis County PD released its official incident report on the shooting, which was remarkably free of any details except the names and dates? Or when we learned there was literally no report at all filed by the Ferguson PD?

The Post-Dispatch also notes that the report criticizes the use of police dogs for crowd control, and the use of tear gas without warning, sometimes on people who were boxed in and unable to retreat. Kind of hard to disperse a crowd with tear gas when there's no place for them to disperse to.

And the report does at least provide an explanation -- though not a justification -- for why some officers in Ferguson may have removed their uniforms' name tags:

The departments also were unprepared for the use of technology and hacks into personal computers which led to identity theft for some officers. The threats led some officers to remove name tags from their uniforms, which the report says “defeated an essential level of on-scene accountability that is fundamental to the perception of procedural justice and legitimacy.”

It's unclear whether the draft report considers the possibility that the cops wanted to behave with unaccountable dickishness. The report suggests police departments worried about officer safety "allow some alternate form of unique identification that still protects their names and to provide a more streamlined process for citizens to file complaints and compliments," according to the Post-Dispatch.

A fourth and final DOJ report on Ferguson is expected to be released in July; that one will analyze the practices of the St. Louis County Police Department. That should be a fun read, given the department and its Keystone Storm Troopers were commanded by the level-headed Chief Jon Belmar, who explained that not a single peaceful protestor was tear-gassed or hit with nonlethal projectiles, because those were only used on perpetrators of "unfortunate criminal activity that spun out of the protest."

Note to self: Stock up on alcohol before July. Damn.