Justice Gorsuch Accidentally Forgets To Bone Immigrants For A Second, But Don't Worry, He'll Get Better 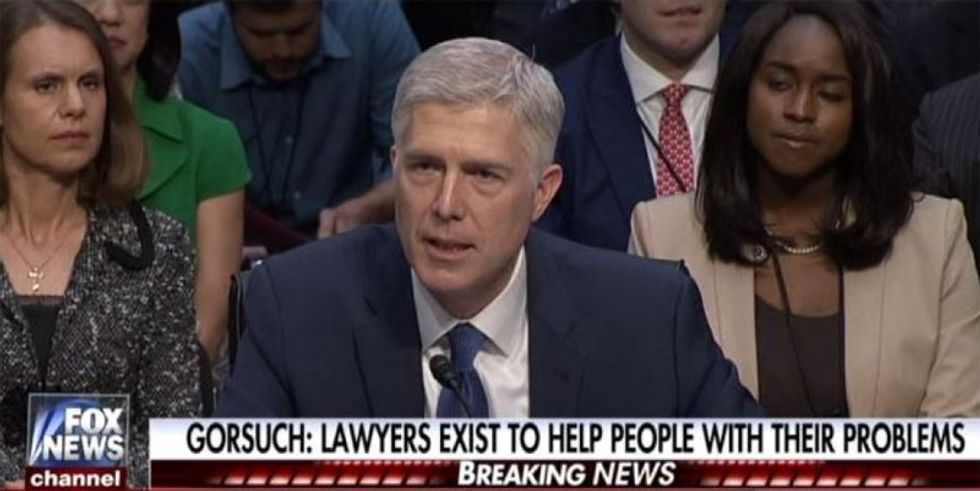 You ain't my daddy, Mitch!

Stop the presses! Supreme Court Justice Neil Gorsuch was right about a thing! Mitch McConnell's golden boy just told Jeff Sessions that he can't even deport anyone he wants for being "a criminal." WHOA IF TRUE! (It's totally true.)

Undoubtedly, President Baby Hands is rolling on the floor, banging his tiny fists in a fit of rage. Good luck White House staffers! Maybe try explaining the reasoning to him -- it's a bit dry, so he'll probably just drift off to sleep and you can leave him there on the carpet while you pour a shot of Jameson into your coffee and wonder if it was a good idea to sell your soul.

But no booze yet for the Wonkers, who are mentally and spiritually intact! Let's Lawsplore!

Defendant James Dimaya was a legal immigrant from the Philippines who had been in America since he was 13. California courts convicted him twice of burglary, in 2007 and 2009. The Immigration and Nationality Act (INA) allows for deportation of a legal immigrant if he is convicted of a "crime of violence," and the Obama Department of Homeland Security (DHS) initiated deportation proceedings against Dimaya in 2010.

"But wait," you are saying. "Is burglary really a crime of violence?"

That was mighty clever of you! The California Penal Code defines burglary as entering an inhabited building with the intent to steal something. It specifically includes tents, outhouses, and mines. So under DHS's interpretation of the INA, stealing a flashlight from your neighbor's tent is a crime of violence and appropriate grounds for deportation. Which is pretty harsh!

See, when Congress wrote a law that referred to "crimes of violence," without defining the term, it gave DHS sole discretion to decide what it meant. And that is not how due process works -- a reasonable person should be able to figure out whether he's breaking the law. Which is why Justice Scalia struck down a similar provision of the Armed Career Criminal Act (ACCA) in 2014, ruling that the undefined term "crime of violence" was "void for vagueness."

Don't think of it as telling Jeff Sessions to get fucked. This is more like a love note to Antonin Scalia. So simmer down, wingnuts. He's still your guy!

The headline on an earlier version of this story incorrectly stated a lawful permanent resident was an illegal immigrant.

We said SIMMER DOWN! (And learn to read the damn case before riling up the nativist loons!)