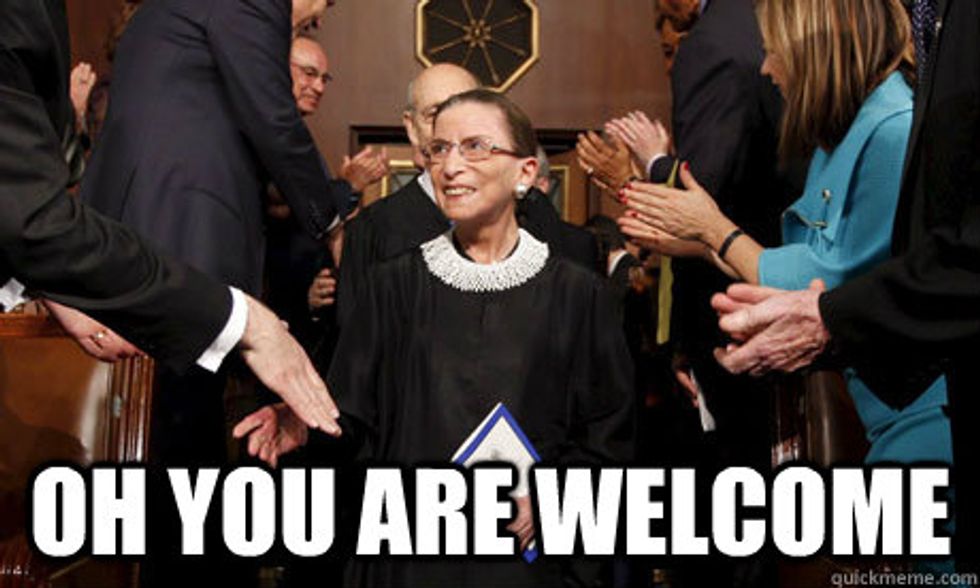 The baddest boozing broad on the bench, Justice Ruth Bader Ginsburg, presided over yet another same-sex wedding this weekend (or "wedding" as normal people call it), because all the haters can SUCK IT:

Wearing her black robe with her signature white lace collar, Justice Ruth Bader Ginsburg presided over the marriage on Sunday afternoon of Michael Kahn, the longtime artistic director of the Shakespeare Theater Company in Washington, and Charles Mitchem, who works at an architecture firm in New York. [...]

But the most glittering moment for the crowd came during the ceremony. With a sly look and special emphasis on the word “Constitution,” Justice Ginsburg said that she was pronouncing the two men married by the powers vested in her by the Constitution of the United States.

Ginsburg has been not-so-subtly hinting that she is prepared to personally cram marriage equality down every single U.S. American's throat. In February, she pointed out that most Americans have realized they have a friend, family member, plumber, interior decorator, or favorite character on TV who is gay, so it won't take "a large adjustment" for the country to accept equality as the law o' the land. Subtext: The Court is totally going to make equality the law o' the land, and we'll all survive, even after the gaypocalypse in June.

Ginsburg also showed her hand -- by waving it vigorously and saying "Look at this!" -- during oral arguments on Obergefell v. Hodges, aka The Gay Marriage Case To End All Gay Marriage Cases, by setting up a nice softball question so the attorney representing gay couples could demolish the "states' rights" argument, and then by historysplaining to her idiot dude colleagues that the definition of marriage has changed throughout history, wives used to be property, and holy Christ, read a book, why don't you?

Ginsburg has also refused repeated demands from some very sad temper tantruming bigots who have insisted that she and Justice Elena Kagan must recuse themselves because they cannot be objective because they do not hate homosexualistas. Just as wingnuts have called for Justice Antonin Scalia to recuse himself for his dissent in Lawrence v. Texas, in which he said decriminalizing buttsex would destroy America and ha ha, yes, obviously we are kidding, no one has questioned Scalia's objectivity on gay rights, that would be ridiculous.

Molotov to the happy couple, and thank you once again to Justice Ginsburg for being awesome and not giving a flipping fuck what the bigots say because she's actually read the Constitution, so there.