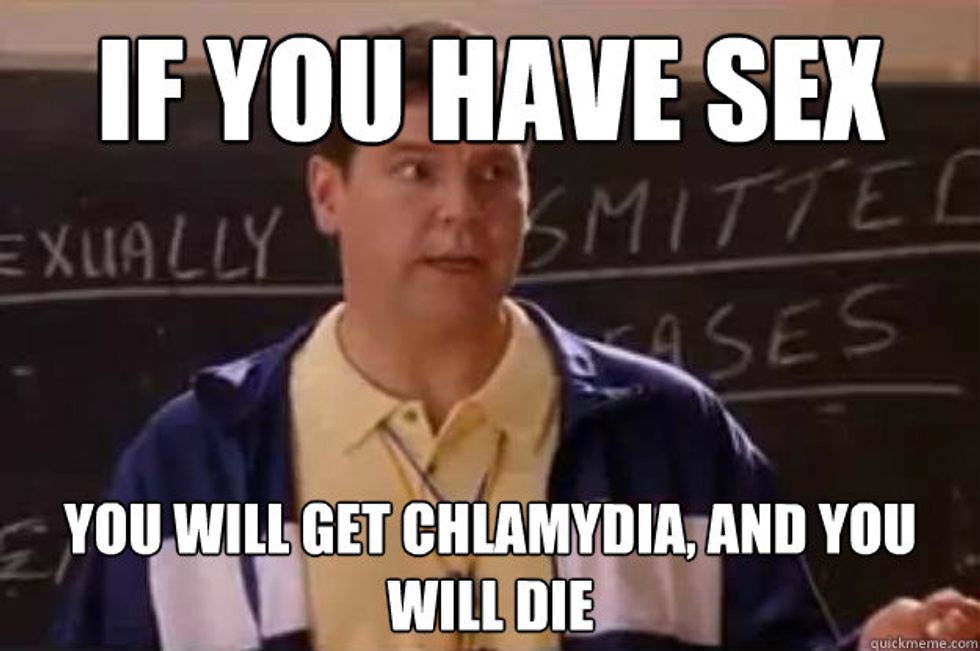 Kudos to Kansas for pulling quite the sleight of hand. Instead of another story about its slashed and burned debacle of a state government, the state's new PR strategy is to distract onlookers with a law prosecuting teachers who present materials about S-E-[redacted].

A new bill would eliminate protections for teachers and allow for criminal prosecution of those who present materials “harmful to minors.”  Stop giving out vodka and cigs, stupid teachers. Those things are bad for children. Also harmful to children, according to some Kansas Republicans, pretty much anything related to sex education.

Leading the charge is the world's worst dinner party guest, state Sen. Mary Pilcher-Cook. Last year, Pilcher-Cook sponsored a bill that requires schools to get parents' consent if they want their children to learn how storks actually carry parasites and diseases and how babies are typically created through genital contact.

“Pornography and obscene materials are becoming more and more prevalent in our society,” Pilcher-Cook said. “It’s all too common to hear of cases where children are not being protected from the harm it inflicts.”

To be "harmful," the bill does require that "a reasonable person would find that the material or performance lacks serious literary, scientific, educational, artistic or political value." Of course the reasonable person standard is to be applied by a state that elected Sam Brownback to statewide office six times. Teachers might want to issue a disclaimer before uttering the word "fallopian," or handing out basically any piece of classic literature.

What a great time to be a Kansas school teacher. The same people who want to cut another $127 million from education now conceivably want you to be charged with a Class B Misdemeanor for doing your job. Now some poor teacher is going to be in cuffs trying to explain to the cops that she doesn’t even like The Canterbury Tales.