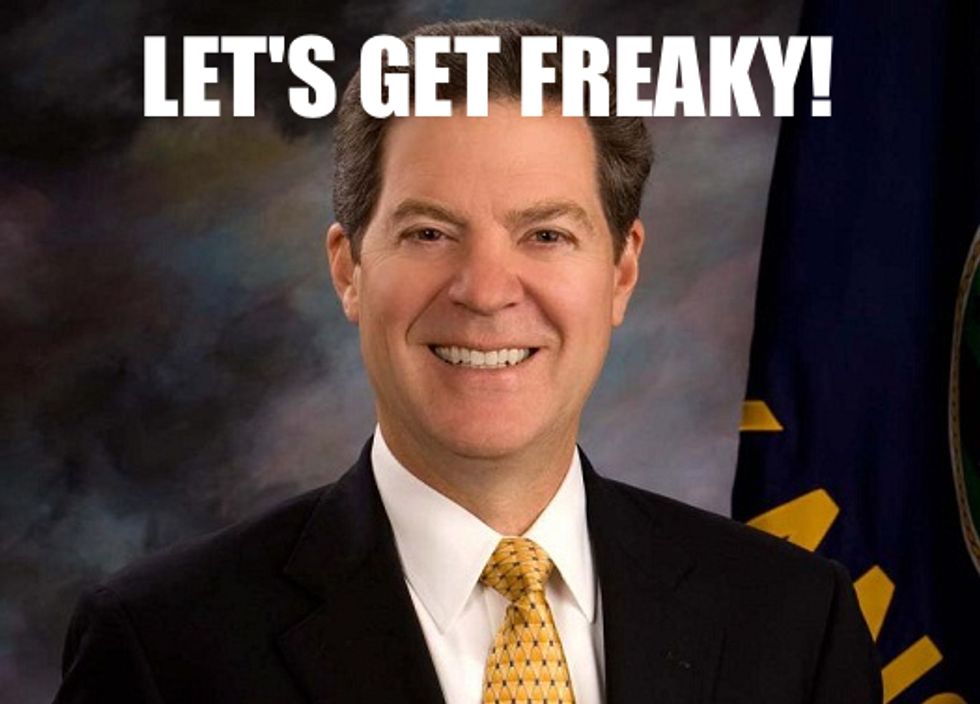 Sometimes a governor needs to get a little rough with his constituents. You know, just to spice things up a little. So five years ago, Kansas Governor Sam Brownback convinced the state's legislators to take their relationship to the next level with a massive tax cut plan that Brownback referred to as a "real, live experiment." With supermajorities in both houses, Republicans would finally get to enact every batcrap crazy tax idea that they'd been fapping to since Reagantimes. Laffer Curve, Trickle Down, and Brackets Eliminated! OH YEAH, BABY! Kansas would be the economic powerhouse of the plains, thousands of businesses would relocate to the Sunflower State, and Liberals would be so owned!

We ARE still in Kansas, Toto! And Brownback's experiment to grow the economy by slashing income tax revenues by 23% ripped through the state like a tornado. As the Center on Budget and Policy Priorities reported in August,

The state’s economy has grown less than half as fast as the national economy; Kansas’ gross domestic product (GDP) grew 4.8 percent from the end of 2012 through the first quarter of 2016, while national GDP rose 11.9 percent.

Kansas’ share of newly opened business establishments in the United States has actually declined slightly rather than increased.

All this and taxes on the poor are up, too! Sammy B really does like it rough! Per the Washington Post:

The poorest 20 percent of households -- those making less than $23,000 a year -- are paying about $200 more, on average, according to an analysis by the Institute on Taxation and Economic Policy in Washington.[...]

Brownback warned them that it was natural to feel awkward at first. But every relationship goes through ups and downs. Then he handed them a dog collar and told them they just needed to cut taxes MORE!

"We have worked hard in Kansas to move our tax policy to a pro-growth orientation," Brownback said in a statement on vetoing the legislation. "This bill undoes much of that progress. It will substantially damage job creation and leave our citizens poorer in the future."

Last night, Kansas Republicans finally decided that getting tied up and spanked isn't as fun as it looked in that Fifty Shades movie. S&P cut the state's bond rating twice, school funding was slashed, and the entire "rainy day fund" is gone -- all so the governor can dress up as the Republican Discipline Daddy. Plus that collar thing really chafes! Turns out they are not that kind of girl after all. So they called up the Democrats who rushed over for some good, old-fashioned bipartisan coupling to override Governor Brownback's veto of a $1.2 billion tax increase.

Kansas's legislature is overwhelmingly Republican, but moderate GOP lawmakers joined with Democrats, overriding Brownback's veto of a bill they'd already passed once that would raise taxes again by $1.2 billion over two years. Eighteen of the state's 31 GOP senators and 49 of the 85 Republican members of the House voted against the governor.

And no one ever mentioned Trickle Down Economics again. THE END.

Because Brownback's kinky tax fetish bears a strong resemblance to Donald Trump's #MAGA tax plan. Ahem..."tax plan." Because despite Trump bragging that "Our tax bill is moving along in Congress, and I believe it's doing very well," all he's got is a one-page memo of vague policy goals that hasn't been proposed to Congress.

But he definitely wants to pass a yuuuuuge tax cut for businesses, reduce the number of brackets from seven to three, and eliminate the Estate and Alternative Minimum taxes. Which will create eleventy billion new jobs and usher in an era of prosperity, believe me. Just like in Kansas! HOORAY!

Please donate to the Wonkette fund for Laffer Curve Research!