Kellyanne Conway Needs Our Thoughts And Prayers Right Now, Y'all 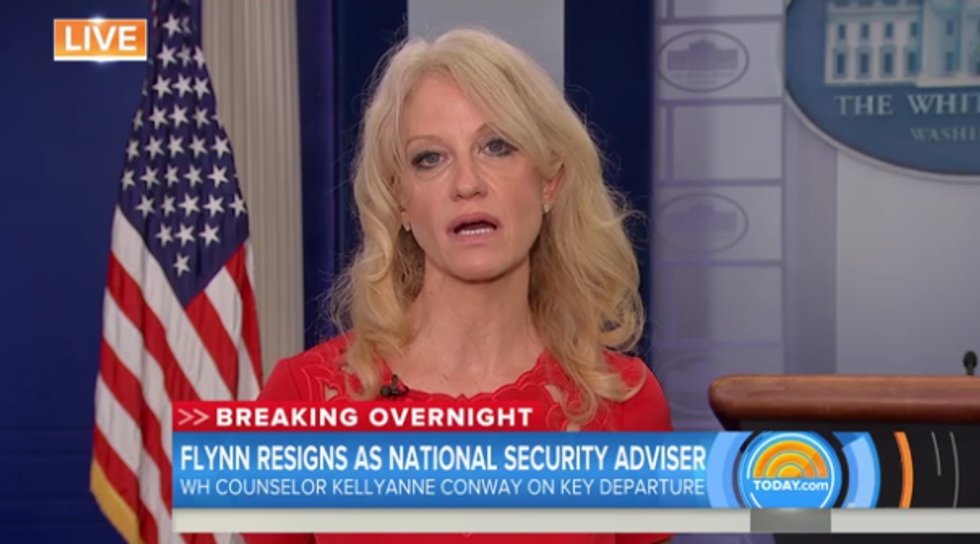 Oh lord, what hath become of our lie-faced blueberry princess Kellyanne Conway? Her last twenty-four hours of human-esque life on this planet haven't seemed much fun, and we're worried she finds herself in the doldrums! We're also worried she's about to lose her job, due to how nobody likes her, everybody hates her, and Donald Trump won't even come to see her anymore, because he's scared of the staircase between his office and hers.

Gaze upon this tweet, and feel the resignation and ennui wash over you:

OK, first of all, that is a shitty poem. Only the last line rhymes, the entire thing is formless, and oh holy crap, is she quoting those old lesbians in the book of Ruth?

And Kellyanne said, "Entreat me not to leave you, Donald, or to return from following after you: for where you go, I will go; and where you lodge, I will lodge: your people shall be my people, and your God my God."

LOL. Lady's position in the White House must be on the damn rocks.

[wonkbar]<a href="http://wonkette.com/612726/joe-and-mika-just-turned-on-lying-kellyanne-conway-like-a-couple-of-heathers"></a>[/wonkbar]Conway's terrible, horrible, no-good, very bad last twenty-four hours started Tuesday morning, when those mean girls Joe and Mika decided to spend an entire segment telling the whole world what a liar she is, and Mika said she "blathers" and cries "SEXISMS!" whenever she gets caught in a lie. They suggested Our Kellyanne is not even worthy of appearing on "Morning Joe"!

At roughly the same time, Conway was appearing on the hard-hitting investigative journalism program called "The Today Show," getting the third degree from extremely tough reporter Matt Lauer, who made her look like a great big dumb liar idiot with split ends, making fun of her for saying Mike Flynn has the "full confidence" of the president AT THE SAME TIME as Press Secretary Sean Spicer was saying the president was "evaluating the situation." Just a few hours later, Flynn was fired unceremoniously as a scapegoat in the mounting Trump/Russia scandal. Lauer said to her, "Kellyanne, that makes no sense," in response to some bullshit done fell out her mouth that ain't made no sense! Unfair!

WATCH: @MLauer's full interview with @kellyannepolls on departure of #MichaelFlynnhttps://t.co/PZ1PGtACUY