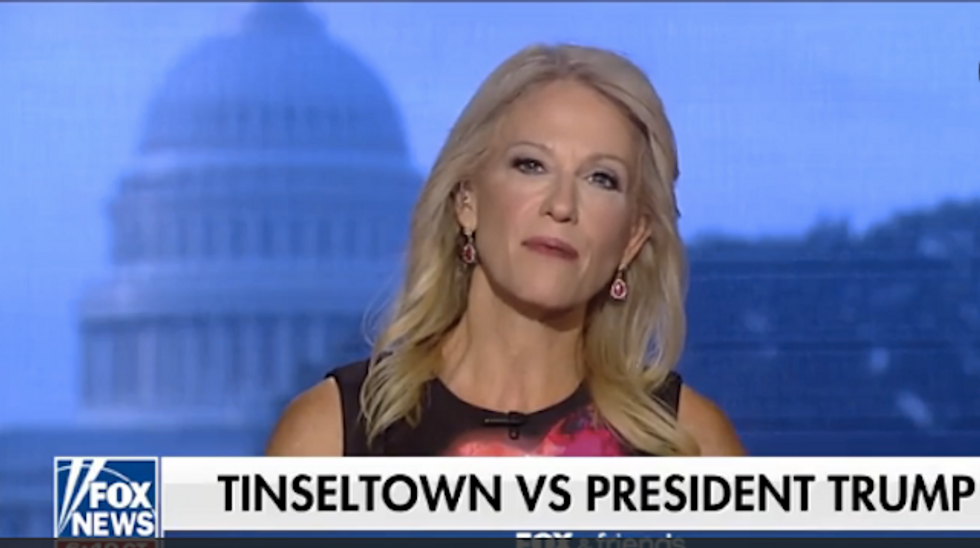 According to the intel at Fox and Friends, Kellyanne Conway is a big fan of the Emmys. Alas, her enjoyment of the event this year was spoiled a bit by what co-host Pete Hegseth deemed a “three-hour celebrity political rally.” In an appearance on the show this morning, Conway attempted to spin it as celebrities being both boring and out of touch with what the people are into, which is "our leader" Donald Trump.

"It did feel that way. I guess -- it's sort of the sameness? They got plucked and polished and waxed and some of them didn’t eat for two months. And all for what? To sound the same?”

Yes, because otherwise, award shows are definitely not the same thing over and over again.

Conway noted that these people do have a right to free speech, almost as much as all the Nazis who love her boss do, but then rambled on about how if you're watching the show and you're an average American, you're going to be alienated. Or something? She does not get to that point here, actually. She gets to it later. At this point she just started on another ramble about how everything is all politicized now, and that ratings are suffering because of that?

The ratings were pretty low this year, but the Emmys were competing with football, so it's not actually that surprising.

Conway then tried to say that these shows and people airing their opinions "doesn't fit" and compared it to the old Sesame Street song we all know and love, "One of these things just doesn't belong here." Ahem ... [SIC].

It was at this point that Conway finally got on with her comments about how these shows are "alienating" viewers who want Donald Trump to succeed.

“You’re alienating at least 63 million Americans [...] You are showing the world that you’re so easy with an insult about our leader. I think that’s really unfortunate, actually.”

Is it though? Allow me to point out Trump voters were more than happy to alienate the rest of us by voting the Pussy-Grabber-In-Chief into office in the first place. They want to deport our friends and take away our reproductive rights and our healthcare. If nothing else, they deserve to be "alienated" by the freaking Emmy Awards -- and yes, even Miss America.

Donald Trump regularly "alienates" large portions of this country with his tweets. Is turnabout not fair play? Why is Kellyanne not worried about all this alienating her boss is doing?

Donald Trump Unpopular At Beauty Pageant Not Owned By Him

Can Miss America be our president now?

Frankly, I hope that we can all work together, as a country, to ensure that nothing, least of all awards shows, is at all enjoyable for Trump supporters. Ruin as many things for them as we possibly can, I say! Music, movies, Miss America pageants, parades, trips to the grocery store, coffee shops, social media -- anything we possibly can. Because why should they get to enjoy anything? Why should they not feel alienated?

If Trump supporters wish to be entertained, I suggest they all go down to the border and stare at the land where that wall that Mexico is never going to pay for is never going to be built. Or take some "personal responsibility" and figure out how to entertain their own damn selves instead of relying on liberals to provide that for them.

Wonkette alienates Trump voters every day, providing an important service to all of America. Tip us to show your appreciation!