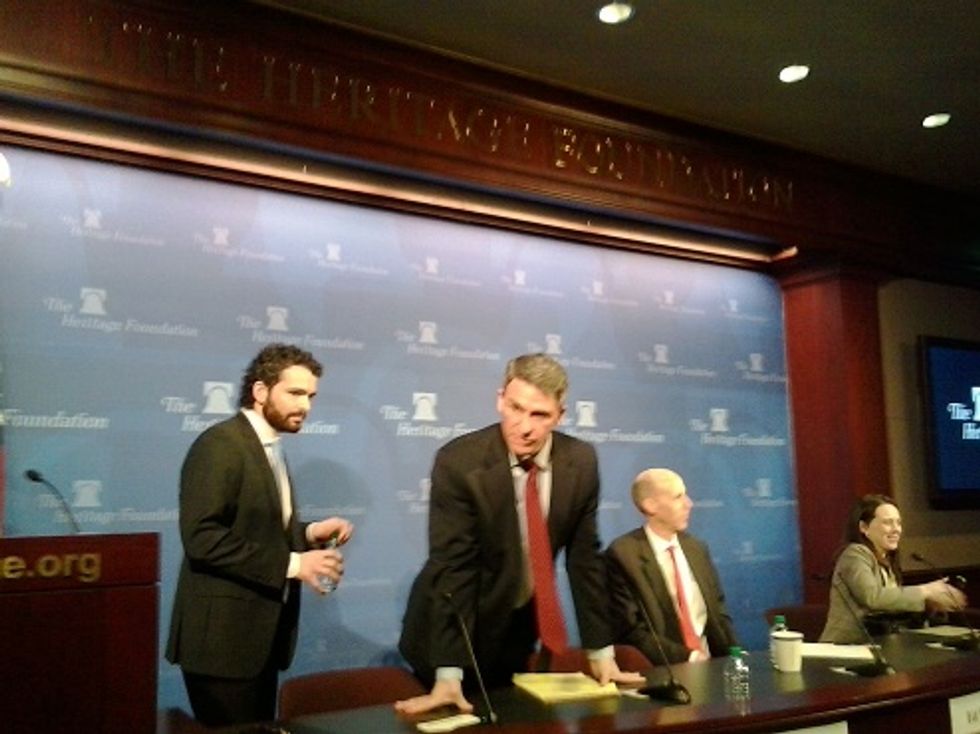 As recently as last November, there was a chance that Ken "the Cooch" Cuccinelli might have been elected Governor of Virginia. He'd knocked good-kind-of-boring Republican Lieutenant Governor Bill Bolling out of the way by convincing the Virginia GOP to call off the primary and select its slate of candidates at a statewide wingnut convention instead. He'd been wooing the loony wing of the Republican base for years as state AG by indulging every right-wing conspiracy theory and knee-jerk judgment imaginable. He sued climate change scientists. He tried to force state universities to discriminate against LGBT people. In perhaps his most epic battle against the forces of evil, he went to the mat and fought hard for the state's right to outlaw sodomy. He kept going at it even after the Supreme Court, and many less-supreme courts, were all oral and anal sex can't really be outlawed, and why do you care so much, dude?

But like Icarus, Ken flew too close to the something trying to be Governor and got his wings all sticky with airborne unregulated coal ash and woke up mid-January to find himself funemployed. So what is he up to now?

We almost very nearly felt a little bad for Ken Cuccinelli after he lost the race for Governor, because he'd given up his old job to run and anyone could tell that, as Attorney General of Virginia, he'd truly loved going to work in the morning. Not to worry, though! Ken's been keeping busy. He started his very own law firm that serves all-you-can-shoot legal defense if you Stand Your Ground someone to death or if some nosy cop doesn't like you carrying your weapon someplace, and he's got friends at the Heritage Foundation who invite him over to have lunch and complain about the guy who has his old job.

Virginia's new Attorney General, Mark Herring, has been violating Ken's beloved Commonwealth in a way Ken would never allow if he were still in charge of defending Virginia's honor. Even though Mark Herring voted against marriage equality in 2006 as a state legislator, he's come out publicly saying his position has changed and that Virginia's ban on same-sex marriage is not legally defensible, and a federal judge struck down the state's ban about a month ago.

This has Ken so upset that he braved the wilds of the District of Columbia on Friday to appear at "Dereliction of Duty," a Heritage Foundation panel discussion about how Democratic state attorneys general better get their keisters in court and defend those gay marriage laws, because that's the job they signed up for, and never mind that Ken failed to defend the state when he didn't think a law was defensible. This is about TRADITIONAL MARRIAGE, guys.

The panel was in an auditorium with about 80 seats, and a few dozen were empty when they got started at noon. One office lady sitting behind us said to another, "Thanks for sending your interns down." Shocking to think that Heritage could not pack the house on a Friday to hear from the Cooch and two guys who write for a blog at National Review Online

Cuccinelli called Mark Herring's decision not to defend the ban on same-sex marriage "an act of political violence to our legal system that is driven by political considerations" and said that while complaints had been filed in an attempt to have Mark Herring disbarred, he wasn't optimistic that anything would come of it because of the "political bomb" that had been "thrown in for cover." If state AGs were allowed to let challenges to state marriage bans go through unchecked, Ken warned darkly, the result would be "chaos in the law and tyranny in the exercise of power."

That all sounds pretty scary! What can be done to stop the slide toward absolute Gay Power? Ken didn't say what we, the humble audience members, could do to avoid this inevitable Thunderdome scenario of equal marriage and clan warfare. We got the feeling he was resigned, believing that the business of attorney generaling just wasn't what it was in his day, and he'd have to stand by and watch as Virginia, once his faithful lover, went gallivanting off with this puckish Herring fellow.

As the crowd made its way out for moderately priced sammiches in the lobby, we asked Ken how his new law firm was coming. Any cases make it to court yet? "Well, we're only a month in," he said, and added that he expected most of his cases wouldn't be self-defense shootings but grievances over harassment for law-abiding gun-toters. "It's those with open-carry licenses who get hassled," he said, but seemed hopeful that he'd be able to keep his clients out of trouble. We told him we hoped to see him in the courtroom soon, because this is a thing that is true! He smiled, looking out at the sea of interns indulging in their free lunch, and said that while he'd happily defend someone's Second Amendment rights, "the idea is that you don't need it."