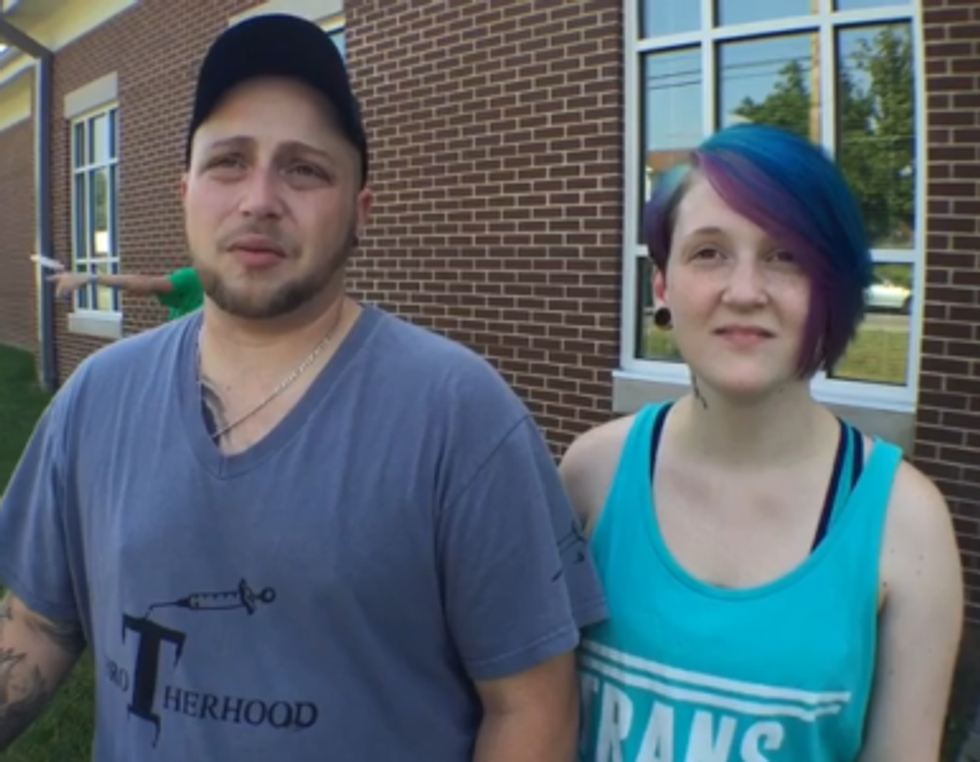 Oh, Kim Davis, clerk of Rowan County, Kentucky, all your fighting has been for naught! Your constant refusals to do marriage licenses for same-sex couples, even though the Supreme Court ruled for marriage equality and a federal judge and your governor have both TOLD YOU to do your fucking job? Wasted. Your pathetic attempts to appeal to higher courts, based on bad advice you've gotten from bad lawyers at the Liberty Counsel? Well, those were already dumb, since the 6th Circuit told you to get bent, and now you're appealing to the Supreme Court, which will also tell you to get bent. But even if you somehow were to win, you have ALREADY violated your Sincerely Held Religious Beliefs, without your knowledge, and according to what you probably believe, this means that your loving savior Jesus Christ will roast you in the fires of hell for all eternity, and why?

Well, there was a transgender trickster demon:

A transgender man and his wife stepped forward Saturday with paperwork showing that Rowan County Clerk Kim Davis apparently issued them a marriage license in February even though she has blocked forms for same-sex couples over the past two months.

Camryn Colen, who is transgender, and his wife Alexis, who identifies as pan sexual, said Davis’ office provided the license on Feb. 26 without asking to see Camryn’s birth certificate, which still identifies him as female. The couple married that night.

UH OH SPAGHETTI-O! The couple says that even though they are surrounded by bad wingnuts, they felt it was important to step forward now, on account of how Kim Davis is being a real dick about this. (They said it nicer than yr Wonkette.)

Davis seems to sincerely believe her mean God will punish her if she does gay marriage licenses, but how awful it must be to learn that her name is ALREADY written in the Lake Of Fire! WITH THE GAYS! Maybe that other Kentucky clerk, Casey Davis, the one who's real sure he's going to have to die in order to stop the gays from marrying, can help his colleague Kim come to terms with what she's done, TO HER LORD.

Oh well, couldn't have happened to a nicer lady.