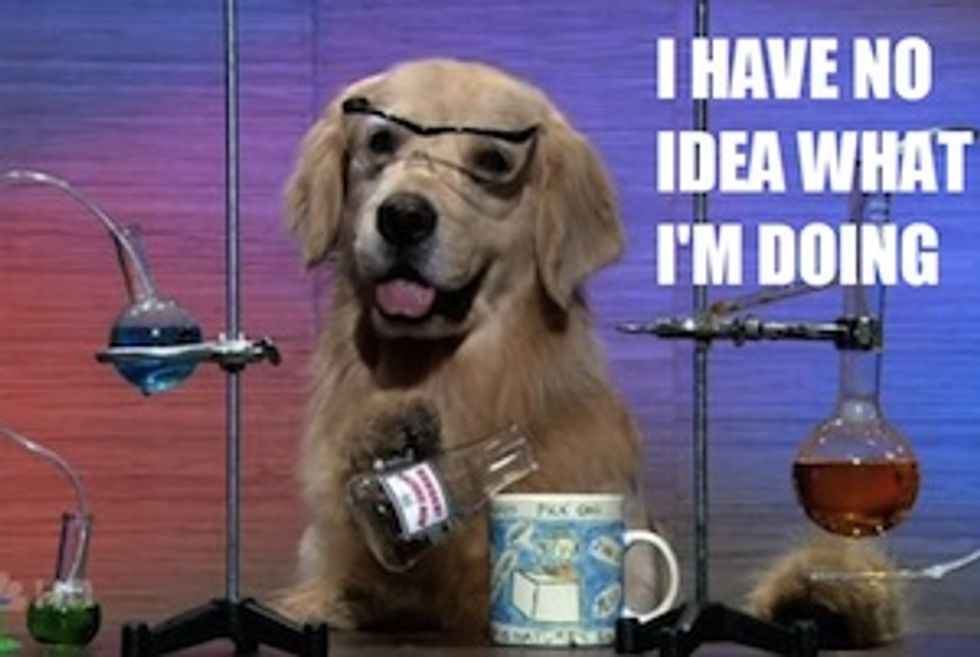 Kentucky Republicans passed education legislation in 2009 that made it easier to compare the state's students to other states. Now they'revery upset that the results came back Stupid.

ACT, the state's testing company, interviews professors to figure out the things most important to student readiness for college, which sounds like a smart thing to do. Unfortunately, those professors have bad news: If you want students to do well in biology classes, they have to know about evolution.

Rather predictably, the Kentucky GOP is madder than a plumber in a Chipotle.

"I think we are very committed to being able to take Kentucky students and put them on a report card beside students across the nation," said Republican Sen. David Givens. "We're simply saying to the ACT people we don't want what is a theory to be taught as a fact in such a way it may damage students' ability to do critical thinking."

Yes! Let's teach students about how Chuck E. Cheese made the Earth out of popsicle sticks three years ago. We don't want to damage them.

It gets even better. From the Lexington Herald-Leader:

Givens said he asked the ACT representatives about possibly returning to a test personalized for Kentucky, but he was told that option was very expensive and time-consuming.

Aw, come on, Smart People. Is that so unreasonable? All Kentucky wants is national guidelines that exempt the state from knowing science, because the best way to prepare students for college classes is obviously to ignore the advice of the people teaching them. Don't worry, they have a totally real and responsible argument:

See? It's simple — evolution isn't real. Not like Jesus! Have you even HEARD of the scientific method, biologists? It's a little thing where you get evidence for a thing, and continue testing that thing, except in cases where an invisible man made the heavens and the earth, then you have to believe it and definitely teach it as science and DON'T YOU BE ASKING QUESTIONS ABOUT IT, HEATHEN.

What say you, Vincent Cassone, chairman of the University of Kentucky biology department?

"The theory of evolution is the fundamental backbone of all biological research."

"There is more evidence for evolution than there is for the theory of gravity, than the idea that things are made up of atoms, or Einstein's theory of relativity. It is the finest scientific theory ever devised."

Wait wait wait. Are you saying... are you saying we have more evidence for evolution than for gravity? ARE YOU SAYING WE DON'T HAVE EVIDENCE FOR GRAVITY?

Somebody get Kentucky on the phone. It's about to float away. [Lexington Herald-Leader]