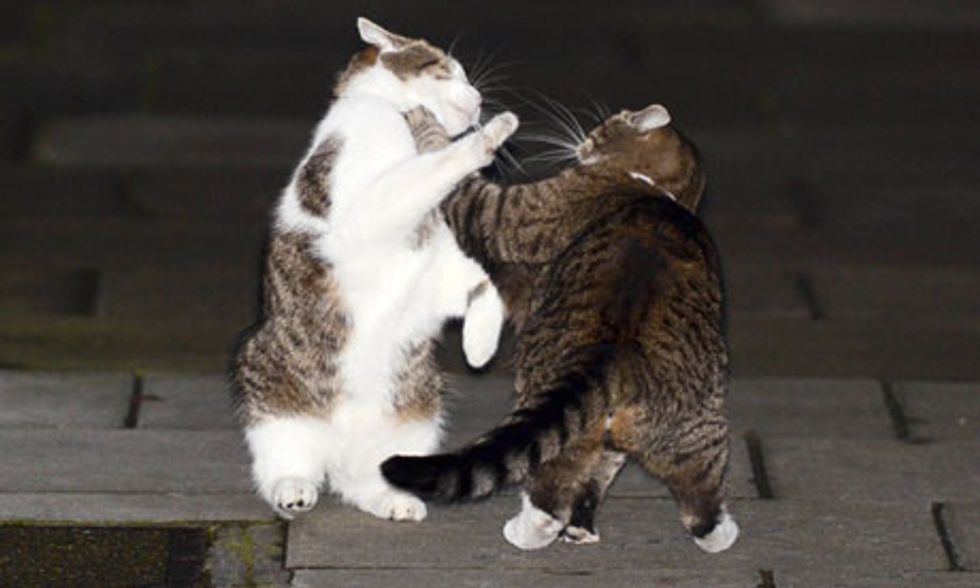 Wowsers, wonkadoodlers, we have a bona-fide catfight on our hands in Kentucky. Claws are coming out, and before long, we imagine that there will be hair-pulling, eye-gouging, and possibly bitch-slaps, all with words, of course. The primary battle between ninja-turtle-reject Sen. Mitch McConnell and Tea Party challenger Matt Bevin is quickly going from nasty to NARSTY with a new ad from McConnell, as reported by The Hill:

“Newspapers say Bevin was dishonest about his resume, claiming he graduated from prestigious MIT. Not true again,” a narrator intones on McConnell’s ad.

Bevin made the 21st mistake of padding his LinkedIn page with a mostly false line about graduating from MIT. He sounds like that intern you once supervised who now claims to have supervised you. Seems like a classy guy.

On Bevin’s LinkedIn page, he claimed to have graduated from the Massachusetts Institute of Technology, misleading the four people that read it into thinking he was some sort of smart fella. Bevin actually graduated from the “EO/MIT Entrepreneurial Masters Program,” which despite having MIT in the name is not actually affiliated with the prestigious Massachusetts Institute of Technology. We did no research, but imagine this program is the sad, forgotten love child of Devry University and the University of Phoenix.

As Daily Caller points out in their morning email (no link), this ad has the dual benefit to McConnell of pointing out that Bevin is both a liar, and attended some fancypants east coast librul school, while McConnell was edumacated properly in Kentucky, where he graduated high school just before joining Sherman’s army and marching down to Savannah.

Bevin’s team shot back like a middle-school pro, saying that whatevs, man, the school has MIT in the title, and besides, Mitch is being all cozy with NObummer and voting for tax increases and amnesty and he is the one who really sucks, so there. And besides, why throw a hissyfit over a technicality like that when there are real issues to discuss, like who to ask to the Sadie Hawkins Dance. They then flicked their hair over their shoulder and went to pout in the corner.

And just to make sure that the news media remembers his catch-phrase from like 800 years ago, hairpiece to the stars Donald Trump decided to enter the twittersphere and say that Bevin should be… can ya guess? … FIRED for lying on his online resume page. The media obligated Trump’s ego by publishing his tweet in a gazillion stories, because our media sucks and loves a good intraparty catfight between two conservative asshats, one of whom is the leader of the Asshat Party in the Senate. Also, too, the media wants to suck up so they are invited to Trump’s Inaugural Ball in January 2017.

What’s the lesson from this story, kiddos? Well, there are four: First, don’t lie on LinkedIn and then run for public office against a man who wins elections by slinging buckets of mud – that’s just plain stupid. Second, it doesn’t matter if you are the descendant of turtles and regularly obstruct anything from happening in Congress, you can probably get re-elected if your opponent is a dumb(er) piece of shit who lies on his resume. Third, Donald Trump is a media whore, but you already knew that. And finally, the media would never actually describe this as a catfight, using derogatory gender imagery like Yr Wonket, because it is two men, but you can bet your ass they would if it was two chicks. Ending with social commentary and not a dick joke, cause sometimes we roll like that.