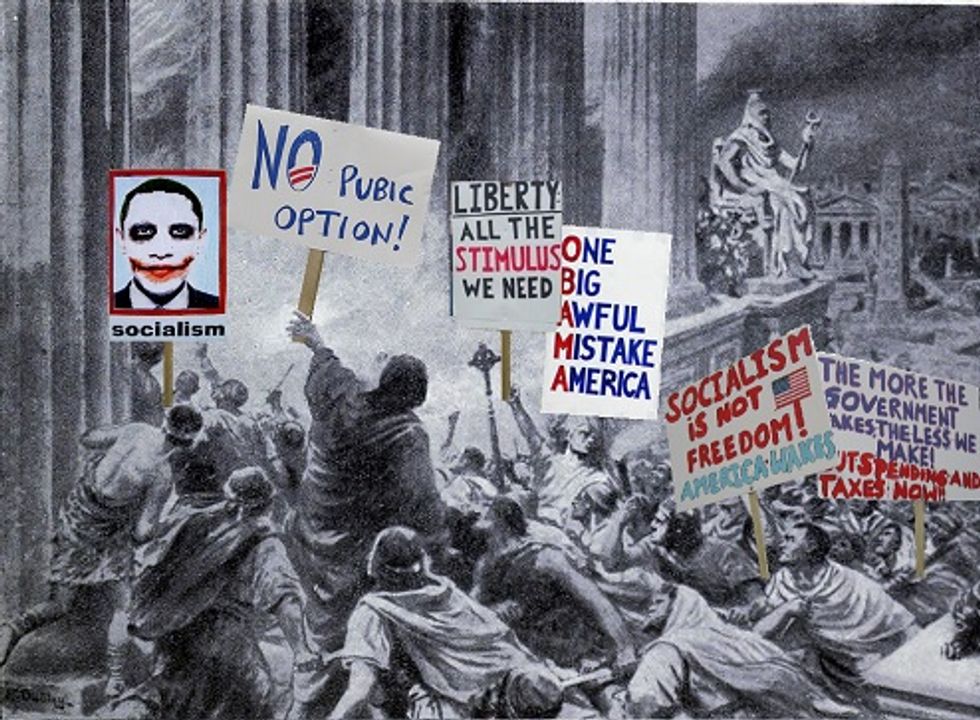 Score another WIN for Liberty! Residents of several Kentucky counties have beenrescued from the tyranny of public libraries -- or more specifically, from the tyranny of library boards being able to levy incremental increases in property taxes without an election being called every year or two. The details are buried in the boring particulars of a state law governing the funding of library districts, but the final score is: Homeowners will save a whopping average of $50 a year in property taxes, for FREEDOM. Oh, and the libraries will have their budgets slashed between 55 and 70 percent, effectively gutting them. But hey, LIBERTY!!!!!

As Alternet's David Morris reports, it all started in 2012, when the Library Board of Pulaski County, Kentucky, used its taxing authority to add an average of $1 a year to property taxes, to support existing services at five libraries. An alert tea partier saw evidence of an out-of-control government agency ramming socialism down the throats of Pulaski County residents, who did not get to vote on the increase (although in 2006, they had approved a bond election to build a new library). So the tea party launched a drive to dissolve the library board's taxing district, and also sued to invalidate a 1979 law that gave county library boards the ability to increase the libraries' portion of property taxes without an election -- we won't go into the details, which are interesting in a wonky kind of way, but basically, the teabaggers went all "taxation without representation" over a system that had financed libraries pretty well for over 30 years, with only minimal increases to property taxes (in general, well below the rate of inflation, and well below the maximum rate of increase the law allowed). But since each increase was not subject to voter approval, that was socialism.

When state judges ruled that the 1979 law was invalid, and that three county library systems would have to roll back tax rates to 1978 levels (and in one county, 1967 rates), a tea partier who had been one of the plaintiffs announced

"The people of Campbell County won ... Our country was founded upon those taking action against tyrannic government.”

Kentucky legislators could fix the problem, but they’ve indicated they won’t do anything until a higher court has ruled on it. That could be a year away. Meanwhile, cities have to budget for the next fiscal year and any new debt will be considered more risky by investors.

But the teabaggers, they do not care for this ridiculous socialist experiment of public libraries, a Marxist invention that has only been around for a couple hundred years and is clearly a tool of oppression. As one tea party blog asks,

“Why should my neighbors be able to rent non-educational DVDs and video games at a cost to the taxpayer when I rent mine at Redbox? Redbox charges a $1.27 per movie including taxes which I think is a steal.”

And there you have the tea party in a nutshell: I got mine, fuck you and your access to things I don't think are important. If you want videos, pay for them yourself, and if you can't afford them, get a job. Also, the minimum wage is communist, too.

And if the court decisions hold, Kentucky libraries will have to win elections in order to stay open and provide services. On the other hand, with the rollback of library taxes to rates from decades ago, Libraries will close, but homeowners will save an average of $50 a year, which is almost enough to buy a single new video game, or two hardback novels, or fifteen bags of Doritos, so it's pretty clear who comes out ahead on that deal.