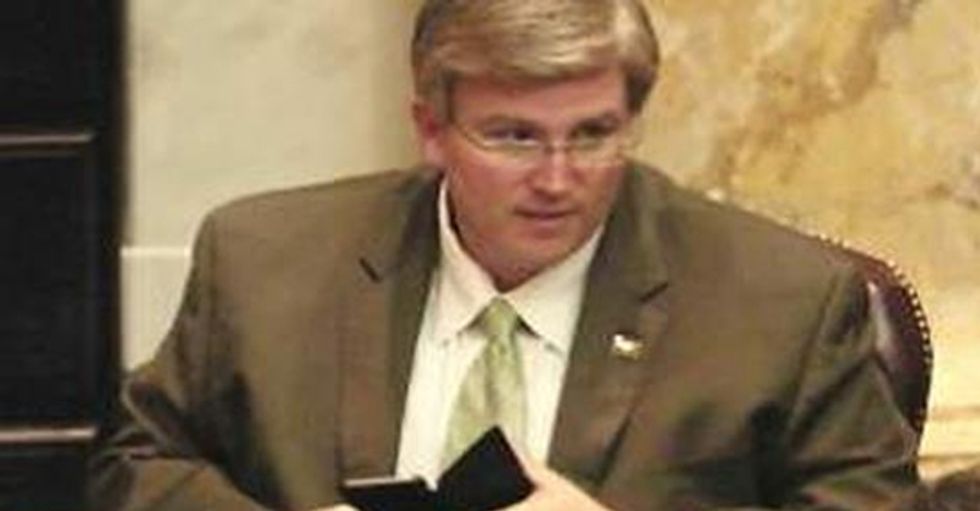 He stopped making sense long ago

Remember Justin Harris, the Arkansas state representative who "rehomed" two adopted daughters with another family, where the new "daddy" raped one of the young girls? Not only is he a state legislator and an adoptive parent with terrible judgment, he's also a super-fundamentalist Christian who sponsored a restrictive abortion law, so it only makes sense that a "family values" group calling itself "The Family Council Action Committee"chose Harris to receive its "Power Of Courage" award, because Justin Harris is clearly one brave guy, standing for the integrity of the American family even while making an unspeakable mess of his own.

The award was originally scheduled to be given to Harris and another sponsor of the bill at a Lincoln Day Dinner held by the Crawford County Republican Party Wednesday night, where Sen. Ted Cruz would be the guest of honor, but the presentation was rescheduled at the last minute when somebody in the county party realized just how terrible that looked. The Family Council will still give Harris the award, just at a different time and venue. Bullet dodged!

The Family Council selected Harris and state Rep. Charlene Fite for its "Power of Courage" award to single them out for their bravery in making it much harder for minors to bypass parental consent requirements to get an abortion, which is clearly a very courageous thing to impose on scared teenaged girls with unwanted pregnancies. In the press release announcing the award, the Family Council says Harris and Fite "demonstrated courage by standing strong in faith when situations were tough at the State Capitol and they did so with grace. They are consistently models of their Christian values in their homes, their communities, and their churches."

The citation doesn't make any direct message of Harris's courage in giving away to a child molester two little girls whom he reportedly believed to be possessed by demons, or his brave press conference where he explained that he'd been victimized by the state Department of Human Services throughout the saga. It did praise him for how courageously he faced all the mean liberal media scrutiny of his actions, though:

Even when opposed by the liberal media, Representative Harris has always held firm and stood tall in his faith. No one can deny Representative Harris’ faith has always led him while serving at the Arkansas State Capitol. In 2015, Harris sponsored the Parental Involvement Enhancement Act, requiring parents to be involved in their children’s decision to terminate life by requesting an abortion. This is now law today.

You know what else is law today? A prohibition on rehoming your adopted children that was fast-tracked after the scandal involving Harris's discarding of his two adopted daughters. Since that law was only passed in April, Harris was not subject to prosecution for giving away his daughters to another family to raise, but he has courageously announced that he won't run for re-election in 2016.

Also not mentioned by the Family Council, but surely a very courageous act on Harris's part, is his willingness to set aside his certainty that big government and social service spending are both ungodly evils so that he could collect $4 million in taxpayer funds since 2010 for subsidized tuition at his Jesus-centric preschool, "Growing God's Kingdom," where the daily lessons used to include lots of Bible readings and Christian prayer until the Godless heathens at Americans United for the Separation of Church and State complained. Now the Jesus stuff is still in the preschool, but only during "after-school" hours, so everyone's pretending it's legal.

Jerry Cox, the Family Council's president, said he was asked by the organizers of the Lincoln Day Dinner to reschedule the award to Harris and Fite Wednesday, because duh, publicity. As of yet, it's unclear whether the county Republican Party came up with that suggestion itself, or may have been passing on a suggestion from the Ted Cruz campaign, which may have been less than enthusiastic about having the senator from Alberta sharing a dais with the man who made America aware that such a thing as rehoming even exists.

Yr Wonkette would like to congratulate Rep. Harris on his Courage Award, and to compliment him on his great fortitude in even being willing to show his face in public, let alone have it poking out of those ridiculously large David Byrne suits.