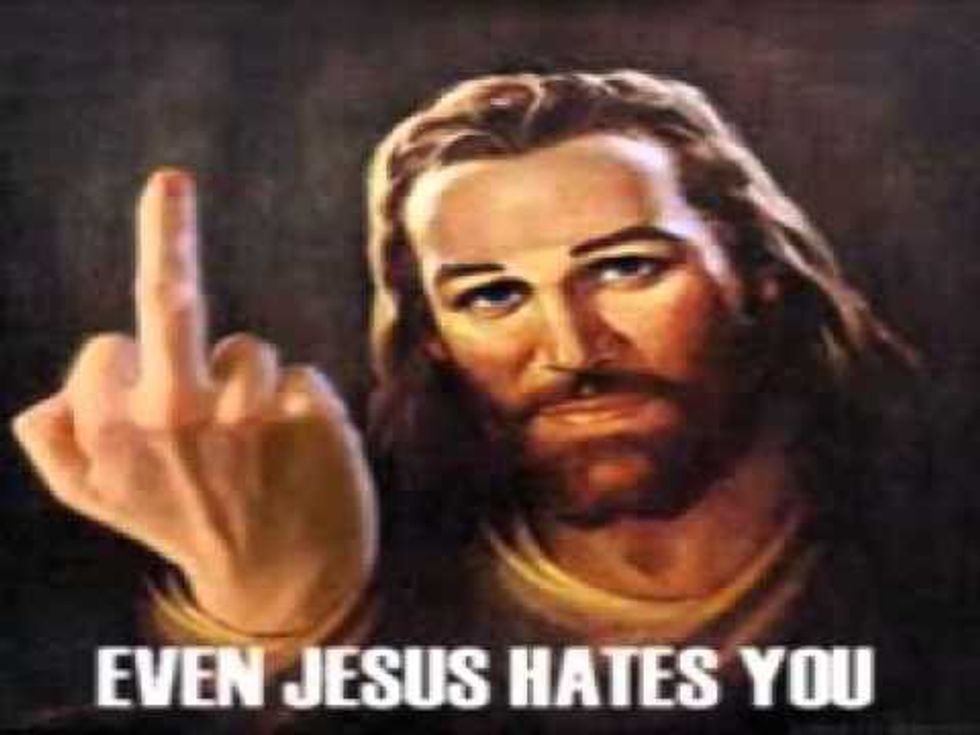 C'mon, gov'nah! If Kim Davis PROMISES to be as big A Idiot as she was being before, and if she PROMISES not to obey any of the court's earlier orders, and if she PROMISES to continue trying to be the World's Stupidest Martyr, she can go home now? This seems to -- fucking seriously -- be the game Davis's lawyers are playing at the moment, because they are bad lawyers who lie to their clients about how THIS TIME they're going to win:

Kim Davis, the Kentucky clerk who's refused to issue same-sex marriage licenses, on Monday asked the Kentucky governor to immediately free her from jail, according to court documents obtained by CNN.

"We would like them to release her from jail and provide reasonable, sensible accommodation so she can do her job," one of her lawyers, Horatio Mihet, said in a statement. "That would be taking her name off of marriage licenses in Rowan County and allowing her deputies to issue the licenses."

Kentucky Gov. Steve Beshear's office said Monday he won't respond, noting that the conflict was a "matter between her and the courts."

NO FAIR! It's like the state of Kentucky wants her to comply with the law or whatever, and who even does that? Davis is back in front of the 6th Circuit too, because guess they didn't tell her to fuck off hard enough the first time. Will THEY let her out of jail?

Mathew Staver, the founder and chairman of Liberty Counsel, which is representing Ms. Davis, said her incarceration violated her right to due process because it appeared to stem from the judge’s “previous intention to incarcerate.” He said Ms. Davis had been jailed after a motion of contempt filed by the plaintiffs that asked the court only to fine her.

Mr. Staver said an official from the Carter County Detention Center in Grayson, Ky., where Ms. Davis is being held, had attended the court session and led her away at the end. That, he said, indicated that the judge, David L. Bunning, had planned to jail her before the merits of the contempt motion were heard.

Yeah, probably because Bunning already knew what the "merits" were -- that this asshole lady was defying HIS court, and that fines probably wouldn't work, since this one wingnut law firm called Liberty Counsel would just pay them for her, and she would continue to break the law. So he listened to Mat Staver and Kim Davis bitching, and decided America would be a lot better off if they were both in jail forever, or maybe crucified like Jesus, except for how Jesus was a good person and Staver and Davis aren't. But, because he didn't want to be an activist judge, he didn't crucify ANYONE, and he let Staver keep his freedom, while Davis gets to stay in jail and fantasize about how if Martin Luther King Jr. and Anne Frank had a baby and Rosa Parks was its nanny, it would look just like her. Seems pretty fair to us?

Davis's supporters, whose collective IQ is apparently comparable to a hunk of dolphin smegma, don't think it's fair. In fact, they KNOW it's not fair because Congress hasn't passed a special law that says the Supreme Court's gay marriage ruling is legitimate, because that is the thing they have all decided to say, even though a casual glance at history shows that such "enabling legislation" is not necessary.

Mike Huckabee, who has decided this is his chance to make his presidential run count for something, will be holding a rally today in Kentucky, where he and Mat Staver probably plan to 69 each others' Huckapenises (Staver has one too), for Davis's freedom. Huck has been doing the teevee rounds most of the weekend, and he's given the exact same speech each time, always starting by saying if you support what's going on, then you hate Abraham Lincoln. He also consistently asks exactly what statute the U.S. American Congress has passed that would even give Davis the authority to issue marriage licenses to the homos. This is a very convincing argument, if you are fucking stupid and have no idea how American government works. But according to Huck, laws and court orders only apply to you if you agree with them. And despite the Supreme Court's orders, Davis, as a government employee, is free to refuse to comply because "you obey it if it’s right." And since the Supreme Court is obviously wrong here, Davis can ignore it completely.

Huck also says this is a "different equation altogether" from Loving v. Virginia, even though George Stephanopoulos points out that it's the SAME EXACT EQUATION. Huckabee understands this is totally different because faggots are gross:

And here is Mat Staver, Kim Davis's very stupid lawyer, sounding like a very stupid lawyer and telling MSNBC's Chris Hayes how his client is just like Dr. King, because he was in jail one time too. Then Staver gets all uppity at the suggestion that maybe his law firm is just using Davis for profit and to advance an agenda: And to cleanse your palate from all that, here are some legal panelists on Fox News talking about how everybody involved in this situation is A Idiot, and how Mat Staver is "ridiculously stupid" when it comes to being a lawyer. Again, this is Fox News. This is not the Democracy Now! Libtard Hour, For Libtards. When Fox is making fun of your conservative beliefs, it's probably time to pack it in: Wasn't that a nice video? Fox News is good for something once in a while!