King Obama To Give Citizens Choice Between Voting Or FEMA Camps, Thanks Obama! 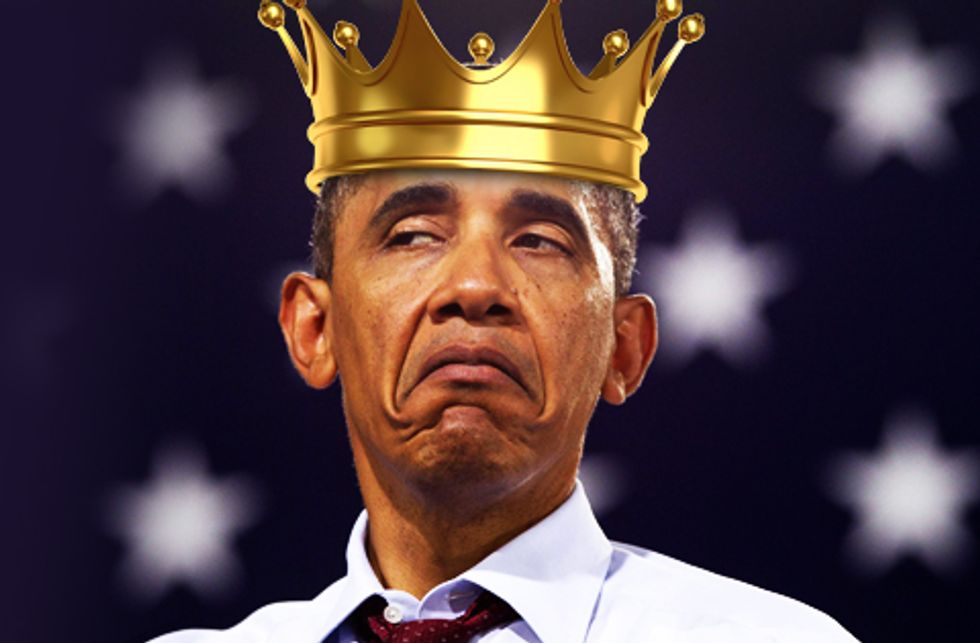 From the wintry environs of Northeast Ohio on Wednesday, an Arctic wind did blast out across the land, chilling the hearts of freedom-loving patriots everywhere. For lo, the Dread Tyrant Obama did proclaim that all the citizenry be compelled under penalty of death to travel to the voting-booth and place the appropriate number of chicken heads in the ballot-basket in order to designate their chosen representative in the Parliaments of the States and the Nation (the Tyrant Obama will, of course, remain King for life).

At least that’s the impression you might have gotten if you watched the wingnut reaction to Obama’s comments to a Cleveland audience the other day. While answering a question about how to counteract the influence of money in politics by turning out the vote, the Moorish King mentioned that voting is mandatory for the citizens of Australia and a few other countries. The husks of skin-suits propped up before the cameras and behind desks at Rupert Murdoch’s media properties nearly shat themselves silly over this factual observation, because of course it meant that Obama plans to force everyone to go to the ballot box on Election Day, and who knows what could happen when the wrong people engage in the franchise?

Over on “Outnumbered,” derp geyser Andrea Tantaros could not believe her ears. “Do we really want everyone voting? I don’t think so!” she fairly shrieked. (Over in the Wall Street Journal, Sister Peggy Noonan echoed the sentiment.) Tantaros’s co-host Kirsten Powers called Obama’s comments “a little authoritarian,” which is a bit like saying someone is a little pregnant. Judge Andrew Napolitano called it a “totalitarian impulse,” but last we checked he still thinks Abraham Lincoln started the Civil War unnecessarily, which should disqualify him from ever speaking anywhere outside a League of the South convention ever again.

The irony, of course, is that even Rupert Murdoch thought for a split second that the president was onto something, until his betters reminded the Australian interloper that his native country doesn’t have a First Amendment. Yeah, sit down and shut up, you commie!

Those of you with a tolerance for facts and long-winded professorial answers about complicated questions can watch that video up top and tell us if you agree with our analysis. A nice Midwesterner asked Obama about how to counteract the influence of unlimited campaign spending that was unleashed by the infamous Citizens United case. The president’s answer is a long disquisition touching on, among other things, the need for people to vote and his administration’s robust efforts to protect the right to vote, which Republicans across the country have been trying to restrict for certain groups for years now. The “mandatory voting” line struck us as a data point to support an argument that everyone voting is a way to minimize the pernicious influence of money in our democracy.

So no, wingnuts, Obama was not suggesting we make voting “mandatory.” Though he did suggest it would be “fun” to amend the Constitution to overturn Citizens United, which we think would be awesome. The president should call on Bristol Palin and Mark Levin, who have a fantastic movement for a Constitutional Convention already up and running. As we have mentioned before, we’re sure they will be open to liberals making some suggestions for new amendments as well.