Kirk Cameron's War On Christmas Gets Earlier And Earlier Every Year 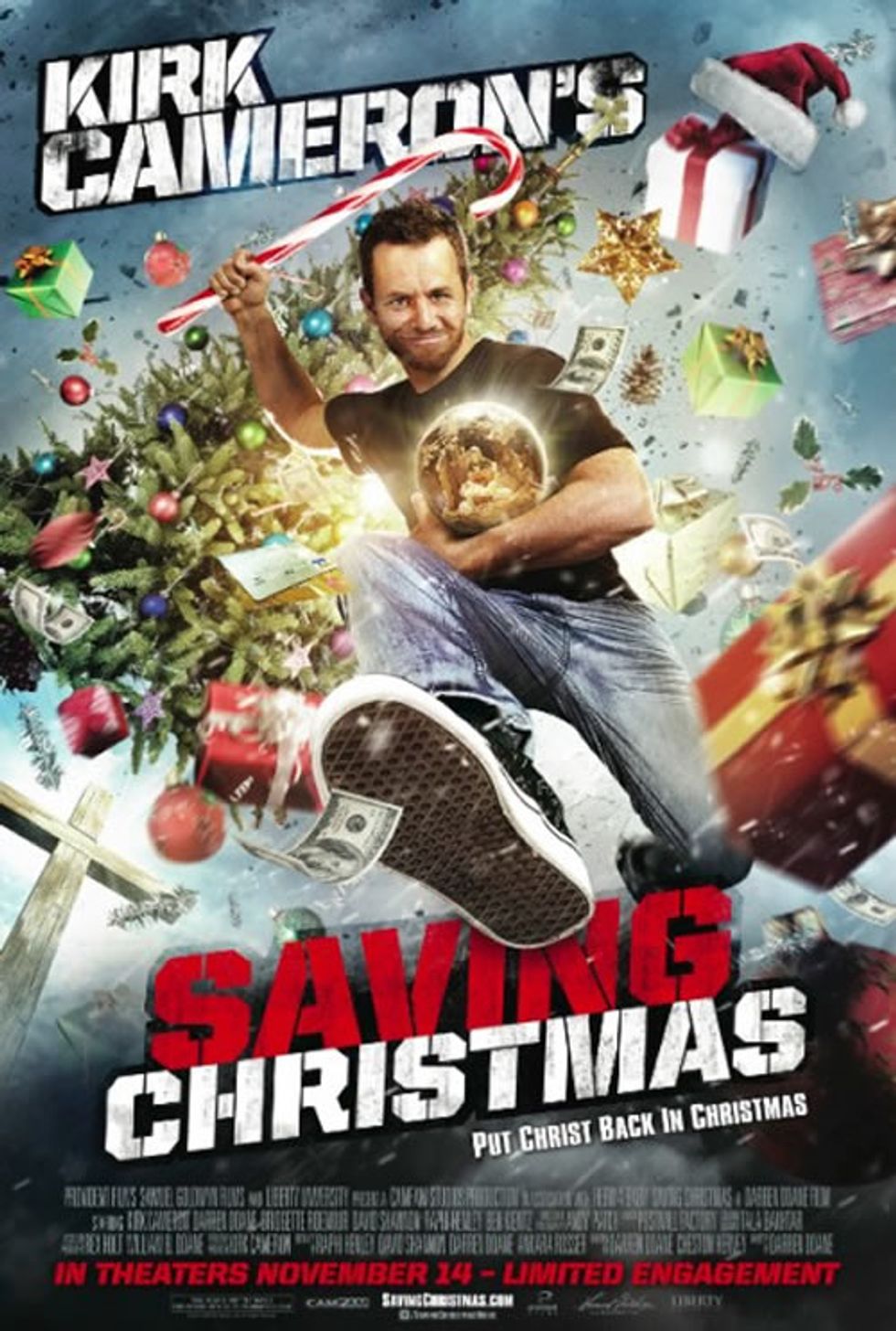 Just as America's scruffy secularists had Christmas tied to the railroad tracks so they could kill it once and for all, Kirk"Banana Man" Cameron is riding to the rescue with a movie called "Saving Christmas," which will rescue the wildly popular holiday and its $600 billion in retail sales from almost certain extinction. Glenn Beck's Home For Culture War Snits reports that Cameron expects the movie to make atheists really mad and bummed out:

“I assume they’re going to get frustrated to see some of their best arguments deflated by this movie, because we take on some of the most commonly parroted myths about the origins of Christmas,” Cameron exclusively told TheBlaze Tuesday.

One of the movie's main goals is to correct several pernicious untruths about Christmas, which are total fabrications by people who want to destroy Christianity:

Cameron said some of the claims that will be addressed in the film include: the notion that Christmas is really a church co-opting of winter solstice celebrations, that Jesus was not born on December 25, that Christmas trees are pagan and that consumerism is overshadowing the true reason for the season.

All of these are just simply not true, says Cameron, and never mind that a lot of Christians make similar critiques, especially about the commercialism. The movie's not a documentary, but is instead a "comedic narrative" that walks a typical Joe Eggnog through a careful debunking of the lies spread by mean-spirited secularists:

“It’s a scripted story about a guy named Christian White who represents the typical white Christian male and he’s got a bad case of religious bah humbugs,” Cameron said. “He is just deflating his wife’s entire Christmas party because he has come to believe that everything we’re doing at Christmas to celebrate is wrong.”

Christian White! We get it! He's Christian, and he's white! Just like Santa Claus!

The movie will even include "reenactments of the original Christmas tree story," because there's only one, we suppose, and the whole glorious shebang will push back against those evil secularists who are doing War On Christmas:

“Christmas is probably my favorite time of year,” he said. “It seems to be the time of year when even cranky, grumpy people seem to be touched by the spirit of generosity and kindness and brotherly love and I know that that ultimately stems from the true reason for the season, which is Christ.”

Cameron continued, “It’s obvious that there is a deliberate attempt to snuff out the holy root that has produced all this wonderful Christmas-time fruit. I think it’s about time someone spoke out and made a movie about this.”

By golly, it really IS time that someone finally spoke out, because nobody has mentioned this before, not ever. The oppression is just unbelievable, especially when you consider that the one thing that every American Christian loves more than Christmas is bitching about the War on Christmas. All that Political Correctness that's running amok is just terribly "offensive to 90 percent of people in our country who want to see nativity scenes and who know the birth of the Christ child is the fundamental root of Christianity, which is the ideology that built this country,” said the former star of a situation comedy. God knows that if you can't put up a nativity scene with a state endorsement, you can't put up a nativity scene at all.

Cameron was careful to add, however, that Saving Christmas is not an “angry rant about the culture war,” because it's a joyous celebration of Jebus, America, and wonderfulness:

“I think that we are much better served celebrating the things that we love and believe in rather than ranting about those who hate what we believe in,” Cameron said. “And so this movie is a celebration and an encouragement for people to dive headfirst into all of the joy and celebration that Christmas deserves.”

So it's a joyful happy celebration aimed at correcting the lies of those who are trying to destroy the very roots of America, but it's not angry or ranty. Yay! We bet it will have the light-hearted whimsy and subtlety you'd find in any Chick Tract.

And looky! There's a trailer! It has soaring music, so you know it's gonna be good.