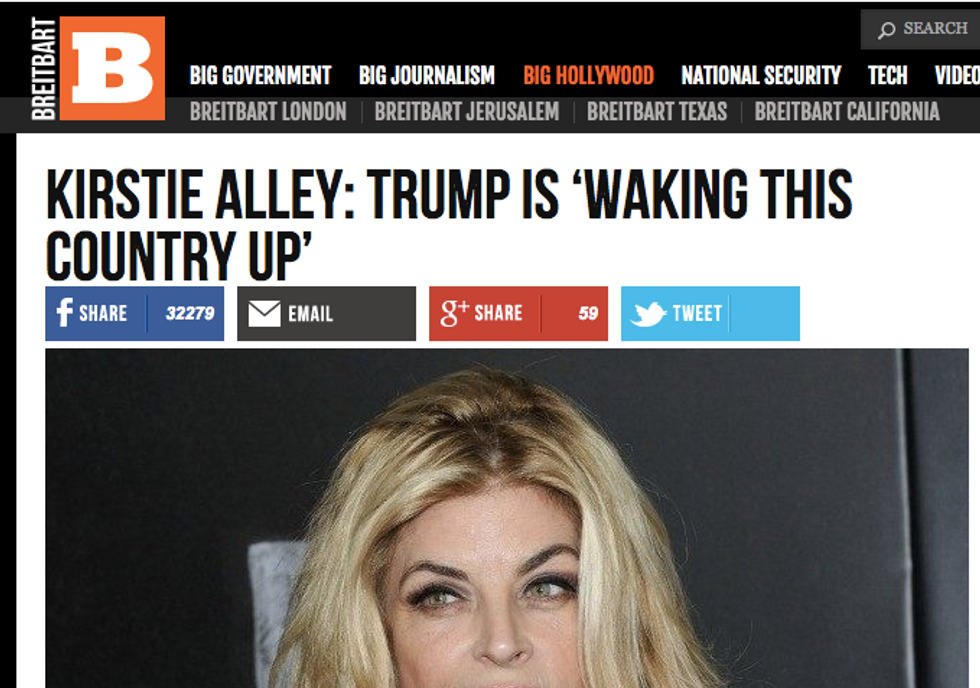 Never-say-die Trump-humpers Breitbart "News" have some important politics facts to throw at ya, and that is that '90s sitcom star Kirstie Alley (who looks good!) likes some of the things that Donald Trump says. Is she voting for him? She won't go that far! But a glamorous Hollywood celebrity saying anything about Donald Trump beyond a long luxurious fart is pretty much all they can ask for.

Here is some news! Did you know Kirstie Alley was interviewed by Foxbusiness.com, about her political views regarding Donald Trump? She thinks he is "waking America up" -- but still not sure she's voting for him! -- probably by clearing all the Thetans that have been gumming up our brain parts with their sticky ... wait, does anyone know how Thetans work? I didn't have a million dollars to join Scientology and find out.

We await Kirstie Alley signing a billion-year contract with the Donald Trump campaign, probably to replace Corey Lewandowski, Trump's campaign manager. Nobody likes that guy! Everyone likes Kirstie Alley! Also, she has about as much experience in politics and to our knowledge never screamed at someone in front of her coworkers that she was a fucking cunt. Unless it was Ted Danson, but everyone knows that guy has it coming.