KKK Guy Still Likes KKK, Except For All That White Supremacist Stuff 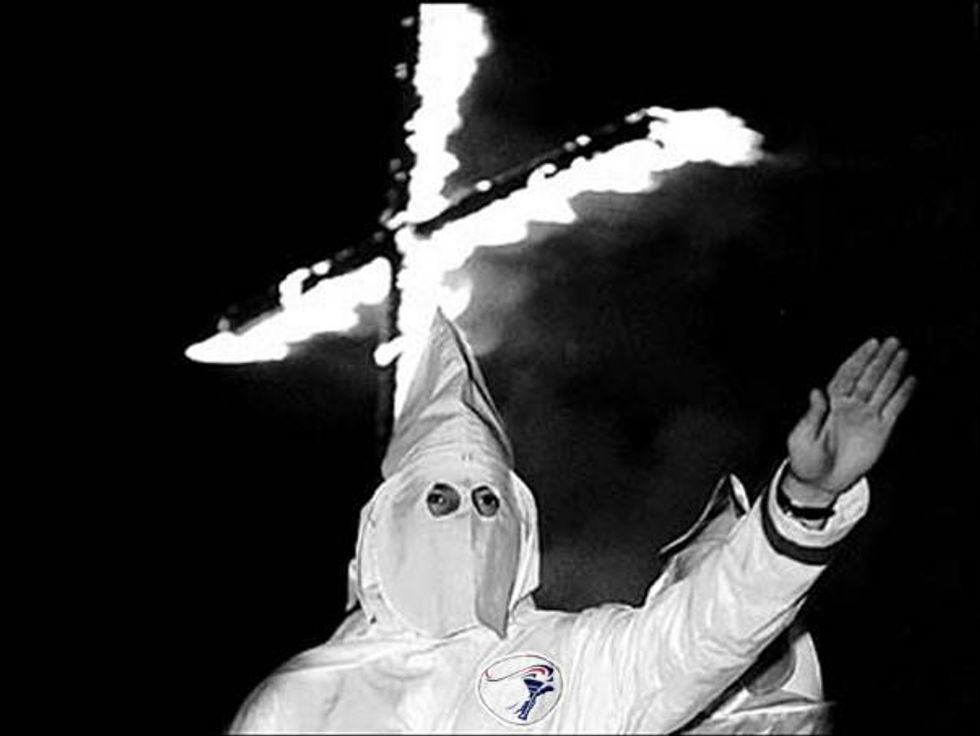 Well, this is weird. Seems there is a Klansman up in Montana -- coincidentally the new stomping ground of the Editrix, her boy toy and their love fetus -- who wants to rebrand the KKK as a nice fraternal organization without all that white supremacism. Because if any one thing has truly kept the KKK from being a leading civic organization, it’s all that opposition to white folks mixing with the mongrel hordes.

Everyone give a big Wonkette hello to John Abarr, member of and self-appointed image consultant to the KKK, who recently announced that “White supremacy is the old Klan. This is the new Klan.” To that end, he has formed a group called the Rocky Mountain Knights, a name with the added bonus of sounding like a Single-A baseball team. True to his mission, Abarr says his new organization will not discriminate against anyone on the basis of race, religion or sexual orientation. Good news for all the mud people!

Obviously this does not sit well with other Klansmen. Bradley Jenkins, imperial wizard of the United Klans of America (why do KKK guys have organizational titles out of a D&D game anyway?), is apparently enraged. Jenkins accused Abarr, a one-time congressional candidate, of using his sudden yen for inclusiveness to further his political career. Which seems to us like a waste of time. Didn’t the Republicans just last week prove -- again -- that you can win big in an election without all that “reaching out to non-white people” stuff?

But no, here is Abarr, talking to the NAACP in nearby Casper, Wyoming like some sort of Democrat. Which makes sense, seeing as how the Democrats founded the KKK and all. He hopes to hold a peace summit with both them and religious groups next summer. The NAACP was receptive to the idea of Abarr trying to reform but did suggest he drop the whole KKK moniker and just try something completely new.

The problem with that is, despite the new inclusivity, Abarr still wants members of his organization to wear the robes and hoods and participate in the Klan’s secret rituals … the ones that don’t involve burning crosses or lynching black people, we guess. And the Rocky Mountain Knights’ major purpose is fighting the new world order and one-world government. In other words, if you want to be a Rocky Mountain Knight, it’s okay if you like the Jews and the gays and the Hispanic hordes (hey, you’re already a step ahead of the Republican Party), but you darn well better still be nuts.