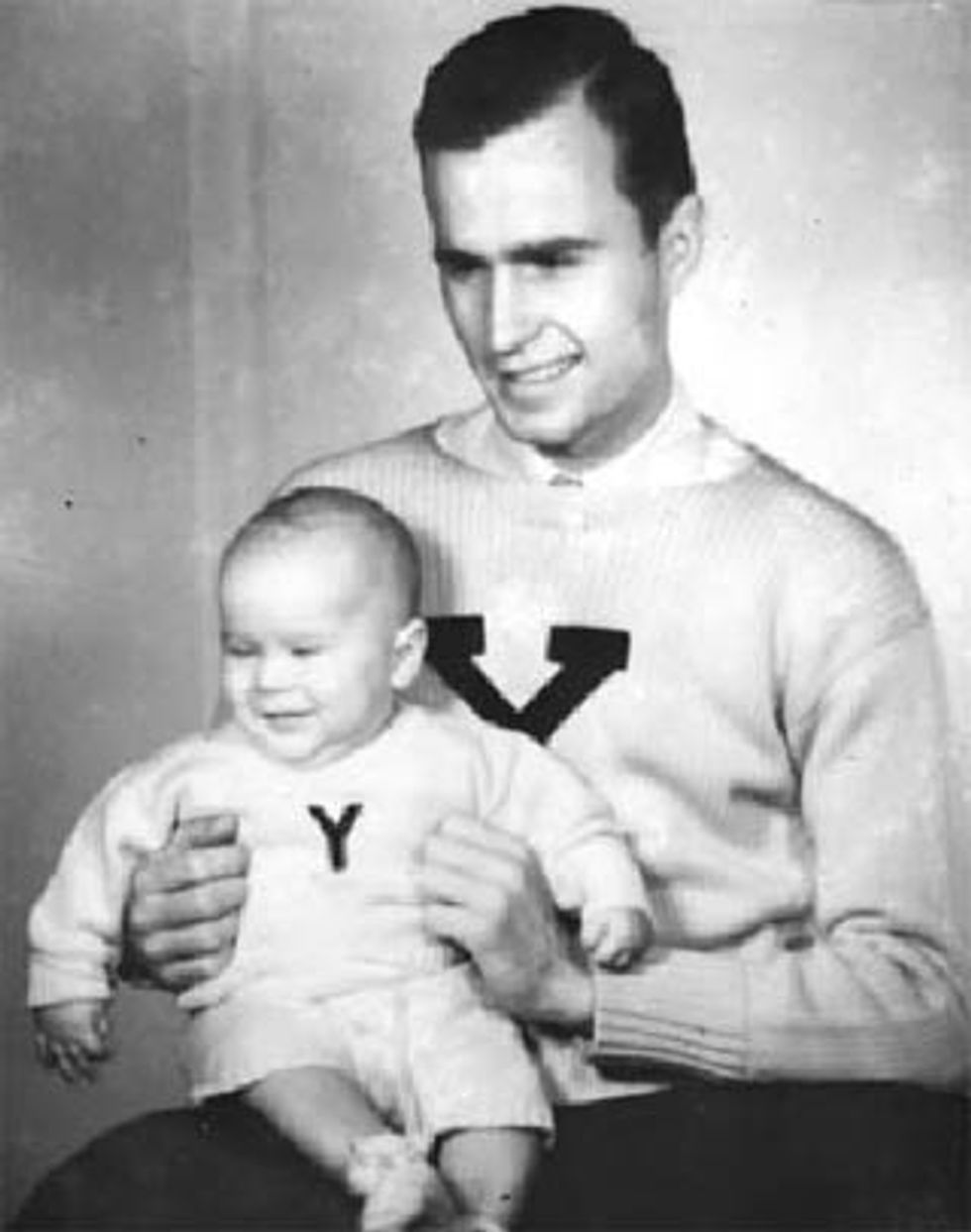 Is drawing a political cartoon really so difficult? Only if you care about the results! This week in Cartoon Violence, we offer some tips on coming up with ideas for political cartoons as quickly as possible. Let's take an over-labeled journey to an ordinary American Hell packed with cowboys and klansmen and Angelina Jolie's lips.

Label the hell out of some shit. This should be your first instinct in any case. Sure, political cartooning is the art of turning visual icons into political meaning, but you can always help your case along by using words to tell your readers the exact political meaning.

Is China going to run into some human rights trouble when it comes to the Olympics? Well, the giant fist is China, the dude with a suitcase on his shoulder -- Or maybe a giant book for a head? Who the hell knows? -- is Human Rights, and there's a sign saying "Beijing Olympics." What, you want some explanation as to how these things relate to each other? Don't you notice that they're all in the same cartoon?

Send your subjects to Hell -- literally! If you're lampooning a prominent politician, you probably don't like him, so why not use your God-like power of cartooning to condemn him to eternity in hell-fire?

You've got roughly two thousand years of Luciferian iconography to exploit. And once you've done it a few times, you'll have plenty of your own material to surreptitiously reuse (remember, nobody expects your devils to look radically different from cartoon to cartoon).

You could also send the politicians to Heaven, with stereotypical angels and clouds standing in for demons and hell-caves, but that's probably best reserved for politicians who have actually died and to whom you're thus obliged to be vaguely nice to for a bit.

Show two "ordinary Americans" discussing the issues of the day. You could draw this cartoon anew for each new topic, but why? These two guys almost certainly drolly discuss whatever the dude in the hat is reading in his newspaper all the time on that park bench, so just swap out the text in the word balloon to make things instantly "relevant."

And if you're worried that the visual isn't enough to sustain reader interest, you can deploy a clever pun! Ha ha, the dude in the leather jacket is worried about his "virtual house"! No, I have no idea what that means either.

Make a completely irrelevant pop-culture reference. How is Angelina Jolie like Barack Obama and/or Hillary Clinton? Well, like Hillary, she has two X chromosomes, and like Barack, she's been in US Magazine, but beyond that, why would she make a great running mate for McCain against the two of them? Beats us! But ha ha, it's funny when celebrities and politicians interact!

Plus she's fun to draw. Did you know that she is quite attractive, and has unusually large lips? Oh, mercy!

Draw a major political figure as a cowboy, or possibly a Klansman. Did you know that President Bush is from Texas? [He's actually from New Haven, Connecticut -- Ed. ] And that many foreigners see Americans as a "cowboy nation"? And that cowboy hats and boots and guns are fun to draw? And that somehow free trade is like a pair of Old West six-shooters? Well, you do now, hopefully!

But if you really want to get "edgy," there's no better way than to slap a Klan hood on anyone even vaguely racist. Go ahead! They're public figures! They can't sue you for it!

When all else fails, make a joke about the weather. Ha ha, cold enough for you, America? You can use this as a platform to either cast doubts on global warming or as confirmation of same (depending on the season), but for pure, unadulterated phoning-it-in, you can't beat a cartoon that literally boils down to "Hey! It's snowing!"

Unrelated (yet related) link: People, if you think I'm mean to political cartoonists, you need to check out The Bad Cartoonist. He's an anonymous political cartoonist who not only mocks his or her fellow scribblers, but does so by name and with cruel references to their families. Don't miss the bitter comments from the cartoonists he rips apart!