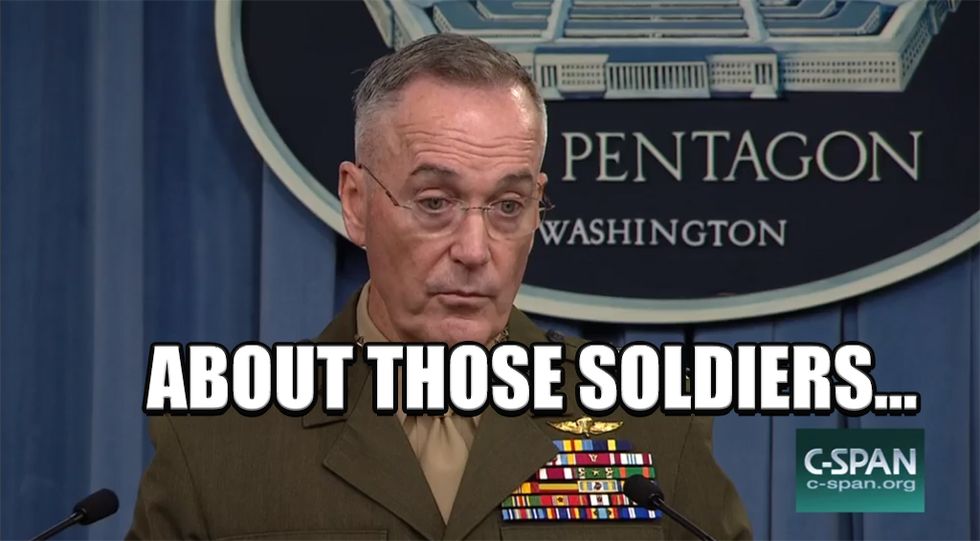 Happy taco and tequila Tuesday, Wonketariat! There's SO MANY NEWSES going on right now, but we're going to cover as many as we can! Here's some of the things we may be talking about today!

In the fallout of Niger, Senators John McCain and Jack Reed want to update the war powers congress gave itself after 9/11, but a number of Senators on both sides of the aisle are too busy to talk about all the US soldiers dying in Not America.

We now know a lot more about what happened to the spec-ops team that was killed in Niger, as well as the 800 US troops stationed there after Gen. Joseph Dunford spoke to the press yesterday -- but we still don't really know why we're there.

Trump's White House is going to shell out millions of Ameros to brainwash gullible olds into supporting the Trump tax cuts for the super rich by blasting ads all over teevee.

Don't tell anyone, but Republicans are secretly talking about DACA, but they're not exactly rushing to get anything done. Dream on, maybe.

The Trump administration is STILL stalling on implementing the Russian sanctions passed by Congress, and now some members of Congress are starting to scheme.

Later today Trump will take a field trip to the Hill for a luncheon with the Senate Republicans, and that's got some senators already dodging questions.

Jeff Sessions announced he's instructing federal authorities to go after El Salvadoran cartel MS-13, stating, "Just like we took Al Capone off the streets with our tax laws," except MS-13 is an international human trafficking cartel, not Chicago's mob in the 1920s. Release the Tactical Accountants!

The undocumented 17-year-old girl vying for an abortion has been thrown back into legal limbo (again) after a court ruled that DHS has to find a sponsor to take custody of the girl -- and it's complicated by design.

Republican Senators Jeff Flake and Mike Lee are holding up disaster aid for Puerto Rico, but only because they want to permanently exempt Puerto Rico from the Jones Act.

A small energy firm in Montana has been awarded 300 million Ameros to turn Puerto Rico's lights on, and it has a curious relationship to Ryan Zinke. Good thing Puerto Ricans aren't already having to get more creative than MacGyver just to live their day to day lives.

Shitty SEAL and Interior Secretary Ryan Zinke is being called a grifty bastard BY REPUBLICANS due to his long history with so-called "scam PACs" that bilk constituents out of money.

Scott Pruitt's EPA is trying to ignore a three-year investigation into New England's Narragansett Bay, but that's not stopping all the science bozos screaming about the effects of climate change.

Nicaragua is set to join the Paris climate accords, leaving the US and Syria as the only holdouts. Let that sink in for moment.

A federal judge refused to throw out 22 of the original 24 indictments against former IL Republican Rep. Aaron Schock for trying to hide oodles of cash and remodeling his office into a Downton Abbey set, causing Schock's lawyers to react that this was "great news." Awesome, then.

House Republicans are are sick of their sausage party, and are now actively courting women to run as Republicans for House seats.

Depending on how you look at it, there's good news for Vermont's few hundred thousand registered voters, Bernie Sanders will run for reelection -- as an Independent.

Republican Senator Thom Tillis is sick of the gridlock in Washington, and he doesn't care if he breaks the government while trying to ram through Republican policies.

Ty Cobb, the swampy, smarmy lawyer Trump hired to smear crap over Robert Mueller's investigation, has a storied history on the Hill of defending politicos from serious scandals.

Crosscheck, the data firm Kris Kobach created to detect "voter fraud," is housing voter data on insecure servers, and sharing information that could be easily hacked. Kobach wants to use Crosscheck for Trump's fraudulent voter fraud commission -- What could go wrong?

SCOTUS hath decreed it shall consider the legality of Ohio's voter purges. SWELL!

REXXON looked a bit silly (again!) after secretly traveling to Afghanistan to meet with Afghan President Ashraf Ghani. Oops, the Afghan government doctored photos of their meeting, as our partners in democracy sometimes do.

The UK has sent a formal letter to Facebook requesting to see whether Russian fuckery contributed to Brexit. We're sure Virtual Zuckerberg will get right on top of that.

In order to effectively spread misinformation, Russia bought space on private US servers to host propaganda and spread bullshit by making it look like the messages were 100% American Fake News.

It's not just Facebook: Russia used its creepy tentacles to infect the fragile minds of cord-cutters on Youtube with propaganda veiled as news reports from RT.

Cybersecurity researchers are warning against a massive new botnet that's brewing in the background of the Internet of Things, so don't skip those obnoxious security updates. You don't want any Spam in your fridge that you didn't buy yourself.

Yesterday, Megyn Kelly called out Bill O'Reilly and Fox for their history and culture of rewarding the good 'ol boys for scoring points in their grabass games. [Video]

After a SHOCKING expose revealed that Milo Yiano-whatever is in cahoots with white nationalists, Steve Bannon has -- ALLEGEDLY -- "You're Fired" Milo, telling a friend that he's "dead to me." </3

We now have PROOF about James Comey's secret Twitter account, but who the hell is this "Reinhold Niebuhr" anyway? Sounds kind of punk.

If you like free things then you should give us some money! We're supported by readers like you, and we'd like to keep it that way.